Yesterday was my son's ninth birthday. My birthday, on the other hand, was a few days ago. Because of this closeness of dates, we always celebrate the birthdays together. So my two oldest daughters (his two half-sisters) came over for a later lunch. 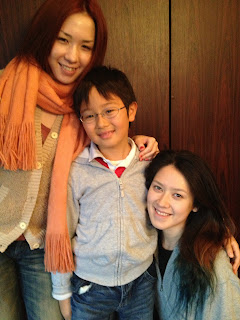 It was a fun affair and his two older sisters came over and we enjoyed a delicious meal of New Zealand lamb chops, New Zealand Green Mussells, Scallop Sashimi, Butter friend scallops, crackers and cheese and a delicious salad.

It was a fun time. I can remember when my son was just born. It seems like yesterday. Now he is very tall and is a voracious reader...

Me? I am getting old. I stopped drinking and went back to the raw food diet again because I feel that I need the energy of a 25-year-old again (raw food will do it, I've experienced it!)...

My birthday also gave me a sort of melancholy feeling that I had posted with that cartoon about Life in Japan the other day. If you missed it, let me ask that you watch it here. It is only three minutes long and is guaranteed to make a tear come to your eye.

Anyway, today, give your kids a hug, or, if you can't, call them up (and your parents too) and tell them that you love them! Do it now!

This morning I awoke early, as usual, and attended to my chores of reading and writing. Usually, towards the end of this ritual, I make breakfast for my wife and son of raw vegetables, fruits and homemade juices. We eat extremely healthy (you should too! I wrote about that in "The Super Healthy Breakfast! - Raw Food! Live Longer, Younger and Look and Feel Great!")

After I finish breakfast, I usually take a look at Facebook and have been cutting down time on it as it is really a bummer and a waste of time.

What I saw today, really surprised me. It was a Facebook post from a "rocker" guy who is the front for a Ramones type of band and he had mentioned that he was at a Mitt Romney event and wrote "Mitt and Ann 100 ft. in front of me." After that, as expected, he was attacked by some people who like Obama or others who claim that Romney hates gays, etc.

The back and forth went on.

Finally, the rocker wrote, "This is not a political discussion. Vote for whoever you want to vote for!"

I was astounded. What a simplistic response. He implies by saying "Vote for whoever you want." That, by voting, things will change.

Doesn't he know that the entire system is corrupt and cannot be reformed? Is he so clueless about US history that he doesn't know the truth?

Maybe, after all, in many cases, musicians aren't the sharpest tools in the shed and they often never read books....

Before Obama, we had a Republican presidency that had Ben Bernanke in charge of the Federal Reserve. Interestingly, Obama upon election, kept Bernanke and continued with the very same policies that Bush put in place of bailing out Wall Street and the big banks on the backs of the taxpayers - excepting that Obama actually expanded them! Timothy Geithner was Fed reserve chairman (and former Goldman Sachs) under Bush; Obama put him in charge of the Treasury!.. 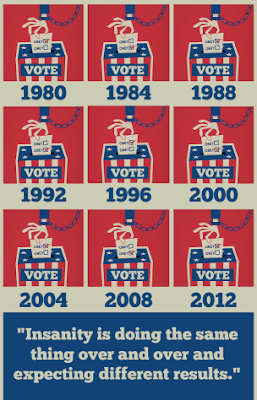 The US presidency is like the manager of a donut shop. We see him but we never see the real owners of the donut shop. While the managers (like Obama, Bush, Clinton, etc...) will come in and say, "You need to change! We need to eat healthy! We need to be positive!" The reality is that, when they become donut shop manager, they still need to sell the 48 box of glazed donuts or they'll be out of a job.... Oh sure, they give lip-service to change and eating healthy but to think that these charlatans represent true change to the Leviathan that is the US Imperialist government is to deny 150 years of history... Why in the world don't people wake up to the fact that there isn't any difference between a Democrat and a Republican?


With that I linked to my favorite article that spawned this brilliant and simple analysis by Lew Rockwell: "The Humanitarian Face of the State With Fangs."
at November 04, 2012

it is true that the political system here in america is corrupt but i think what the rocker guy is saying is, vote for whoever you want to. as in either you write in someone (like you suggested last week with r. paul) or vote for a 3rd party candidate. how else are we to change the two party system? but let's not forget, congress has the power and they are the scum of the earth. ron paul would have never got anything accomplished if he had become prez. congress would have been attacking him the whole time.

Anonymous... Excellent points. You are right... But I am thinking (dreaming?) that a change to the two-party system will come when something in the order of less than 10% of the people show up to vote... Otherwise the big money and big parties will co-opt all movements like they did with Occupy and Tea-Party movements.
Thanks!

it is pretty pathetic to only have 10% turning out to vote. maybe getting rid of the electoral college would be the first step in helping that change.

Firstly, I want to eat at Mike's house. That birthday meal sounded awesome.

However, we need to be real about voting. What America could use is a second party, not a third party. The Republicrats and Demoplicans are virtually the same and let's not pretend otherwise.

If Americans are to have the right to vote, they need to be able to chose someone who represents freedom and peace, not war hawk socialist creep A versus super war hawk fascist creep B.

Better yet,don't vote. It's useless and more importantly, it's evil.

Happy belated Birthday to you and your son!