Facebook Advertising and "Promote" Scam is a Total Failure! Judge For Yourself!


I love Karl Denninger. I don't always agree with him but I like his "Take no prisoners" attitude. Today he points out something that I've been complaining about for a long time: Facebook's scams and failure in advertising. 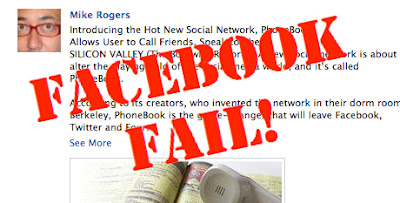 Please refer to: Market Ticker's Facebook's "Promote" Blows Up In Their Own Face?


There's a meme that has been flying around for a while since Facebook introduced the "promote" feature (where you can pay to cause your postings to show up on people's consolidated timelines -- and if you don't, most of the time they won't) that I'd like to address:


Many of us managing Facebook fan pages have noticed something strange over the last year: how our reach has gotten increasingly ineffective. How the messages we post seem to get fewer clicks, how each message is seen by only a fraction of our total “fans.”
It’s no conspiracy. Facebook acknowledged it as recently as last week: messages now reach, on average, just 15 percent of an account’s fans. In a wonderful coincidence, Facebook has rolled out a solution for this problem: Pay them for better access.
As their advertising head, Gokul Rajaram, explained, if you want to speak to the other 80 to 85 percent of people who signed up to hear from you, “sponsoring posts is important.”

What, did you think that you were going to get something for free forever?
Well, no.

But here's the problem -- Facebook apparently can't make any money (so their results show) without trying to ding you on both sides.  In other words not only do they insist that a person with a page pay to reach most of the people who "like" them, they also then spam the users who like the page with their own advertising.

This is tantamount to an admission that their advertising model is a failure.

Yep. FAILURE! There's nothing much that I can add to this. I've written many times about how much I dislike Facebook's business model and how I think mobile advertising is a failure... Recently I've been grousing - on Facebook no less - about how my older posts would get 70, 80, 100, 150 likes... Now? They only get 5 or 6? How did that happen?

Well, it's obvious isn't it? They see that I was getting many hits and shares so they decided to cut my access in the hopes that I'd buy in to their "promote" scam.

I've also noticed that people coming to my site from seeing a link from Facebook has dropped off a cliff while Twitter is still there. Facebook launched their "promote" scam in May. The results six months later are a disaster. Evidence? See for yourself: 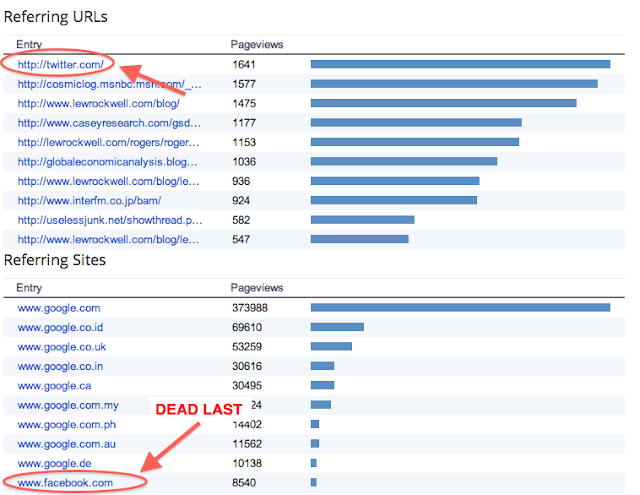 The traffic to my blog over these last six months from May ~ Dec. 2012. Facebook that used to rank with Twitter has dropped off a cliff. It's obvious why.

You know what they say? The proof is is in pudding.

Facebook is a marketing, advertising and strategic planning failure.

Read more at the Market Ticker: Facebook's "Promote" Blows Up In Their Own Face?