Why My Child Doesn't Have ADD or ADHD or Any of These Medical Problems.


"He who has health, has hope; and he who has hope, has everything." - Chinese Proverb

My kid doesn't have these various diseases that plague US children (ADD & ADHD are not so prevalent in Japan nowadays). Why? My child eats healthy.

I firmly believe that American children suffer all sorts of ailments because of diet. Think about it, of course your kid is sick when he eats processed foods all the time. Of course he can't concentrate at school; his brain is fried with chemicals. Of course. There is no child who can function normally when eating junk all the time. Eating junk doesn't go through you, it becomes you.

Folks, a breakfast of Sugary cereals, a Pop-Tart and a glass of homogenized milk is NOT a healthy breakfast. 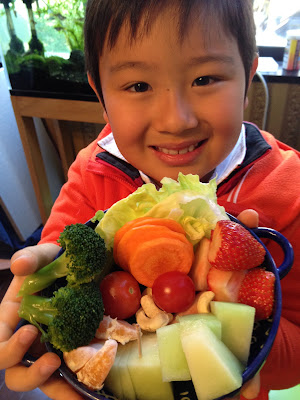 Everything is raw. Heavy raw veggie and fruits intake at every meal. Raw lettuce, carrots, strawberries, tomatoes, cashews, melons, oranges. My son eats this three times a day. He will also have a little bit of rice or bread once a day and some meat or fish. Never will he eat processed foods or fast food. (Read this! What timing! http://abclocal.go.com/wls/story?section=news%2Fhealth&id=8920784)

Health is important. Beef and meats are a luxury. If you're going to eat them, then eat the best quality grass fed beef. For Chicken? Buy chickens from real farms.

The best quality grass fed beef comes from New Zealand. USA beef is full of drugs and chemicals  (and bovine growth hormones) and I've bought Australian beef that was reprocessed. So we don't buy that anymore.

I used to coach children's basketball. I could see how the kid's mood and energy levels were different every time at practice. I'd ask them what they ate... It was then that I realized that there is a problem.

I know mom and dad are busy, but preparing raw foods three meals a day is cheaper and, actually, faster (cut a lot at once and use Tupperware)... Also you'll save money in the long run on medical bills.

Folks, your child's health (and yours) begins with what you eat.

The doctor of the future will give no medication, but will interest his patients in the care of the human frame, diet and in the cause and prevention of disease. - Thomas A Edison

* NOTE: We also don't have a TV so my child can focus on important things like reading and music and sports.... TV is brain damage and a huge waste of time - and that has zero to do with content. TV is a displacement of time. Time is the only non-renewable resource!

While I won't disagree with you on why your son doesn't have ADHD, my son does. And he sure as heck as always eaten healthy foods. We steer him away from processed sugars, processed foods, soda pop... and have done so since he was born... but he has ADHD. Perhaps it's because we had him so late in our lives... in fact, my cousin's 3 kids are all ADHD, and they started late... It's not like my parent's generation when they started having kids in their 20s... We had ours in our 40s. There is also a healthy melange of mental health on my wife's side - close enough to touch... and on my side, but a generation removed... though my cousin (who has the 3 ADHD kids) seems to have some mental issue that he hid for 18 years or more... I don't think it's fair to say that your son doesn't have ADHD because of a diet. I myself never ate in a superior way, but my mental health, despite everything around me has been stable, if not superb. My son, because of genetics or something else hasn't been that lucky. And man o man... just thank your lucky stars he's healthy and remains that way. My son's focus is bad enough that he often fails to hear the initial instruction and so sits and does nothing for an hour in school. I've taught him to read in the past 6 months... taking him from a kindergarten level to where he should have been at the beginning of grade 2 this past September... so at least we're only about 3 months behind. The same with math... though half the time I read the instructions on his homework and have no idea what the teacher wants him to do... personally, I think the teaching is lacking a bit to go along with the ADHD. Oh... our teachers here in Toronto went on a 1-day strike today.

I didn't know you had a medical degree. Are you a genetic scientist? Do you have a degree in advanced dietary analysis?

Or are you just throwing around radical generalizations and ragging on the US, again?

And before you rail on me, I'm not an American, I'm Singaporean.

I would not be surprised to learn ADD is from vaccines, via direct shots, or from eating vaccine filled meats, or from 'treated' drinking water.

Just curious, do they put fluoride in the water there?

For some reason, off and on, I keep thinking about that plate of food. ... And how it has more appeal in the Summer. But it still looked good.

I saw a computer generated brightly multi-colored image of the structure of the white matter in the human brain the other day.

It appeared to be exactly like certain types of mushrooms.

So maybe we're not so different from the worlds largest living organism.

It's laughable some of the ideas people have. America has over 50% of their children on prescription drugs in general (while being 117th in infant death rate) 60% of her children overweight; 1/4 of all American children are obese (while 25% more are under the poverty line); 2nd highest child diabetes rate in the world; highest % of children in the entire world BY FAR on prescription drugs for psychological and behavioral disorders and when a father of 4 makes a common sense observation he is asked if he has a medical degree? Hilarious! As if a document received from 8 years of college can trump nearly three decades of child rearing? Really. That's funny.

Nope. Don't have a degree in medicines or chemistry. Didn't have one 25 years ago either when I refused for my family vaccines that included a Mercury based preservative called Thimerasol that was aid to be completely safe and was prescribed by those same scientists (with degrees)… But now? Well, those little documents didn't serve those chemists and doctors too well it seems (nor the millions of children and families that have suffered) because Thimerasol has now been found to have a relationship to autism and banned in several US states and many countries.

But I didn't have, nor need, a degree to tell me the common sense that Mercury is poisonous (even those all those with degrees said their little papers proved it wasn't!)

Point? You don't need to be a weatherman to see which way the wind blows...

People with little papers are quite often very wrong. Common sense requires no degree, just requires that you use your brains a bit and exercise some common sense….

How anyone could take what I wrote as anti-America criticism is simply astounding.

Since when is criticizing American diet, disease and drug use equal to anti-Americanism?

If I want to criticize sick American society, militarism or empire, I will and will say it directly...

To think that criticizing things like drugging children, allowing them to watch too much TV, or recommending that children not be fed junk food is grounds for being criticized as making, "radical generalizations" or is "ragging on America" is a great stretch of the imagination.... Or just plain stupid.

From Singapore? OK, then what is your excuse for such lack of comprehension and incoherent response? Are you saying Singaporean children (any children) who are raised on junk food, being overweight, watching too much TV, and being pumped full of drugs (like Americans kids) too have a high chance of medical and psychological and physiological disorders? If so, very good!!!!! Duh! That's what the article is about!!!

See? Did you need a degree to know that junk food, TV, drugs, obesity are bad for kids???? Thanks. It warms my heart to know that being irrational and illogical is still not a solely America trait. This comment from some guy claiming to be from Singapore shows that it's not (unless he's lying or a troll - which I suspect he is).

Denial ain't just a river in Egypt. It runs deep through America and Singapore too.

Of course you are right...