A very wealthy family in China bought a large farm and built a beautiful palace upon it. They wished for good luck, health, and fortune, so they decided to ask a famous Zen priest to write a scroll for them to hang in their den. The priest accepted the job and went back to his shrine to pray for enlightenment.

After a few days, the priest returned with the finished scroll and the entire family gathered around in great anticipation to see the words that the priest wrote for them. The priest said a short prayer and opened the scroll and hung it on the wall.

The entire family was furious at the priest. They shouted and demanded that he go back to the shrine and rewrite the scroll for them.

The priest sighed and said: "I will rewrite the order of names on the scroll in anyway you wish. But I think there can be no other sequence. If all die in this order, I think that is true prosperity."

My own mother died in a freak car accident in 1994. Of course, I was crushed. I was in Japan and she was in America.

After the car accident, she was taken by ambulance to the hospital. I understand that she floated in and out of consciousness before she died. Since I was so far away, I had no way of seeing her, holding her hand, and saying: "I love you mom. Thank you for everything." But at least I can be thankful that my father was there to do so when she went away. Many people who die are not fortunate enough to have a loved one with them, to hold their hand, to whisper in their ear: "I love you. We all love you.... Please rest. You may go now." And with words like these, my mother "let go" and passed away. I will always regret that I couldn't be there with my mother in her time of need. I thank God that my father could be.

There are too many people in this world who die alone. Could there be a more woeful way to die, than when loved ones cannot be there by your side to say their last, "Good-bye"?

After my mother died, though, I was angry. I was angry at the world and I was angry at God. For months after my mother's death I had recurring nightmares and the most bizarre dreams. Many of the dreams involved times when I was a boy. I would be playing in a playground and I would see my mother on the other side of a fence. I would cry out, "Mom! You're back!" And I would begin to sob uncontrollably. My mother would grow angry at me and she'd start to leave. I'd cry out again, "Mom! Come back!" As she walked away, she would turn around, look at me, and always say the same thing: "I cannot come to visit you, if you are going to cry every time I see you." And with that, she'd disappear into a field of tall grass.

I would always promise not to cry the next time. But I couldn't keep my promise. I think I saw this same dream just about every night for at least six months.

Then one night, I had the most bizarre dream of all. My mother, as usual, walked away because I was crying, I was on my knees. I had my head in hands to try to hold back the tears. And then suddenly, I found myself in a huge chamber. It was like a colossal courtroom. I looked up and there was an old man sitting in a chair, looking quite frustrated and irate at me. He was massive in size. He was huge, at least 40 or 50 feet high and he was sitting down! He was brushing his beard and looking at me as if he was considering what to do.

I knew exactly who he was, yet I was not afraid of him; I was furious.

I shouted: "It's not fair! It's not fair that my mother died in an accident. My mother was still young and healthy. She should still be alive you bastard!" The old man just stared at me. I continued to shout at him. And I began to cry.

Then he calmly said: "So you think it is unfair that your mother has died?"

"Of course it's unfair!"

The old man sighed and said, "Very well then, I shall allow you to be reborn and I will give you a different mother, and that mother will still be alive today. Would you find this acceptable?"

I suddenly awoke from my dream. My pillow was wet with tears. I pondered this strange dream for many weeks after that. Then it dawned on me: Instead of being angry that my mother died in an accident. I should be thankful for all of the wonderful times we spent together, all the hugs and bedtime stories. All the laughs and the great dinners. All the special times that my mother made me feel special, and all the other times she cheered me up when others did not. I should thank God for all the wonderful memories I received from being the son of this loving woman. She was always there for me when I needed her. And now, whenever I see her in my dreams, I do not cry. In fact the dream I often have with her now is one where I am on her side of the fence and we are sitting in the field and having a picnic and smiling together. 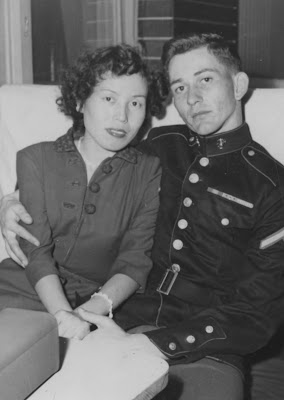 My mother and father around 1952

I haven't seen my mother in a while, but I look forward to the next time I do. I told this story to a priest who has become my friend. He asked me to show him a photograph of my mother. I did. He said: "Your mother was a very beautiful woman. Always keep this image of her in your heart. You are most fortunate that it is you, and not her, who has but memories and a snapshot."

"How profound!" I thought. And I have always kept his words of wisdom in my heart. I share these words with my friends whose parents have passed away.

....And the children can hold photos of their parents too...True treasures of life!

I wouldn't trade those photos for anything in the world. Would you?

Thanks once again to Anthony Gregory for advice and the editing of this article. This article originally ran on Lew Rockwell on Sept 23, 2004

I am rerunning this article for my dear friends Red and Sue
at March 22, 2013

This is a powerful post. To be honest, I got emotional when I read it. My sister died in a car accident in her 20s a few years ago. I was out of the country when it happened. Like you, I didn't get a chance to hold her hand but I'm glad I have at least her picture. I think my parents feel the same way...

That's been on my mind a few days now.

Especially this part: "The entire family was furious at the priest."

Some People are truly rich.

Others have no clue.

... How many are in the middle?
... And how many have been purposely misled into thinking like the family in the story?

Hi Mike, this is a fabulous post, very profound and moving. Thought provoking! Life is damn short! LIve it awake! It makes me miss you! I hope all is well. Nick is back in America, translating his first Japanese novel. Also still in the video game world. I am creating my own clothing line, Groupie Couture, and teaching my writing classes, among other things. Traveling a lot, growing old gracefully, hope!
Much love,
Pamela

I thought I'd cross-post this for posterity, ...or whomever:

Anonymous: On dying of cancer

Thank you for sharing it in my moment of suffering.

I've heard it said that when we grieve that it's more for our sake than the one who has moved on since they no longer feel the burdens and aches of this life. We on the other hand are left with a void and oftentimes lack the understanding or wisdom on how to fill it. Was that space cleared so that we could grow? A sort of spiritual "pruning"? I have the same sort of thoughts after losing mom, sister and daughter. Precious women in my life.