My Most Recent USA Television News Interview is Up on Youtube


On Feb 17th an interview that I did with WHDT World News that was aired in Boston, Miami and several other East Coast US cities has come out on Youtube. 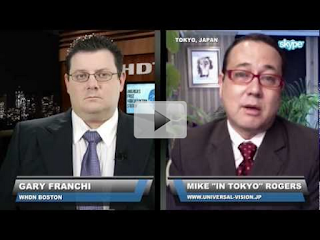 WHDT World News is an independent full service television station. The program I was interviewed on was a Next News Network's WHDT World News Program that airs daily at 6 p.m. and 11 p.m. Eastern on Comcast, DirecTV, Over-the-Air and Online at http://usmediavault.com/stream.php?s=whdt


I thank producer Brian Gill and Gary Franchi of WHDN and the Reality Report for the opportunity. Keep up the good work! You guys rock!

Hi Mike,
I just wanted to say that I really enjoyed listening to you speak. You are very bright and informative, and you came across well.
Cheers

Your advise to get a Mac PC was what pushed me off the fence to get one.

I've read some bits (I'm probably wrong) about how Flash Player is a vulnerability so I haven't installed it.

I've noticed on some blogs I can watch a video with the Mac, but if I go to YouTube, I cannot view the very same video.

I wonder why that is?

So that's why I didn't watch your interview.

Perhaps I'll hook up my old Windows PC and watch it. I feel so primitive when I switch back from a Mac though, I keep wanting to push the touch pad to click and right-click and I have to remind myself I'm not using a Mac. It's kind of funny how your muscles get used to doing things a certain way.

There's a marketing thought in there somewhere, I think.