For Every One Death Due to Nuclear Power, 4,000 Die Due to Coal

Seth Godin has a piece over at his blog that points out brilliantly something that I have been saying over and over about the Japan nuclear accident and mass media sensationalism: Things are being blown way out  of proportion.

Drama is much more exciting than dull and boring


For every person killed by nuclear power generation, 4,000 die due to coal, adjusted for the same amount of power produced... 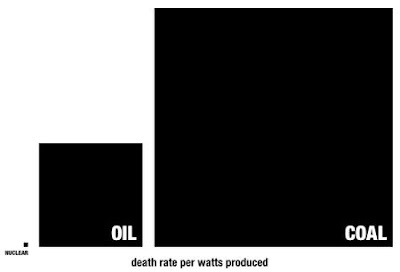 Regardless of the facts, too many people are guided by fear. Fear is not rational.


Seth also links on to another article and chart showing the statistics comparing deaths due to differing energy sources. Interestingly, in one example, even though Solar power accounts for less than 0.1% of world energy and nuclear is 5.9% of world energy, more than ten times more people die annually from Solar power than nuclear power.


I have pasted the chart here for your convenience:

It is a lack of information and fear of the unknown that creates this sort of atmosphere amongst the public. I posted some simple, yet excellent and thought provoking videos about nuclear power which I would hope everyone would take 30 minutes to watch.  The odds of you dying from coal related emissions are over 4,000 times higher than the odds of you dying from nuclear power related emissions. If people played the odds and were sensible about this, they wouldn't be moving away from countries with nuclear power but would be moving away from old-fashioned coal burning nations into nations with nuclear power.


But fear is a greater motivator than calm, fact-based rational thinking as fear is an emotional reaction. It is this type of thinking that allows us to do things like, say, buying lottery tickets when you know that you have a greater chance of being killed by lightening than you do of winning the lottery.


Which reminds me that I have to get out and buy tickets for this weekend's lottery. The jackpot is over $3 million dollars, you know!


This is not to mention about how many millions of people have died and continue to die due to wars concerning the control of oil resources. There's no comparison to which have killed more people in the last 60 years: Oil or coal versus nuclear power.


The trouble is that people today have equated nuclear power with the atomic bomb and nuclear weapons. I believe that this is due to years of conditioning and molding due to marketing efforts by the coal and oil industry. I'm glad to see others who are expert at media agreeing with me.  Nuclear power vs. nuclear weaponry? That's like comparing an apple with a herd of bull elephants or - like in the comparison that Seth Godin so aptly displays - like comparing the odds of dying in a car accident or from high blood pressure related diseases to dying in an airplane crash.


When you live in western society and whenever the facts do not bear out what you believe, you can bet your bottom dollar that most probably tens of millions, if not hundreds of millions of dollars have been spent on marketing, advertising and promotion to help create the ideas that you believe.
at April 01, 2011

"When you live in western society and whenever the facts do not bear out what you believe, you can bet your bottom dollar that most probably tens of millions, if not hundreds of millions of dollars have been spent on marketing, advertising and promotion to help create the ideas that you believe."

This is a truth. Unfortunately, statistics can also lie and are easily manipulated. This is also a truth. I understand why you are so determined to support nuclear energy; I have no fondness for the media. The reality however, is that almost everything in life has a negative aspect or risk. Right now I am much more concerned that the problem of the Fukushima plant be solved in an expedient manner to help facilitate the recovery of the effects of the earthquake and tsunami. Just how are the survivors in the tsunami area doing? My heart is broken for them.

As an aside, did the Japanese media relay the difficulties of the use of Corexit, that I understand was against the wishes of the EPA, in the Gulf? Or the devastation of the area? Did they give clear information rather than the junk food of the main media here?

Thanks M.
Please understand that I am not pro-nuclear power. I am pro-truth. I am against inconsistency. If you are against nuclear power and want to protect the environment too, then I think you had better throw away your TV, refrigerator, stereo, etc. This is what I told friends as far back as 1975 when they were protesting nuclear power in California. Hypocrisy has no limits.
Ditto for those who claim that AGW is going to kill us all yet are anti-nulear power.
I have posted numerous times about helping the poor people up north instead of harping about this nuclear sensationalism (just search "disaster" on my blog's search function.
I believe that, instead of blowing smoke about nuclear power, people should focus on the real problems of the true disaster: 200,000 people without homes and supplies.
Yes, the Japanese NHK reported heavily on BP gulf disaster and Corexit. The other japanese news - besides NHK - are just as bad a lot of junk as western news is...

PS: We are organizing a DIY relief trip to Ishinomaki at end of next week and will film a documentary to place on Youtube. I am organizing this relief efforts with friends and will report accordingly.

Thanks so much, M!

What, solar power deaths? You mean people falling off their rooftops installing solar power panes? What are you arguing then? We should continue building power plants instead of taking advantage of this moment to convert some of our energy source to hydro, solar, geothermal, etc.?
We should use less electricity, yes, but don't let the nuke companies off that easy. It's goddamn dangerous and very difficult to store waste. You say you're interested in the truth, but then when have the nuke companies ever been partial to the truth? And fucking Tepco? Those fucking clowns? Come on, man. Come on.

It's wonderful to read such nonsense as the scattered logic of the comments from anonymous above. There are things known as "Hyperlinks" on the article that link to the data that you question.

I don't see anywhere where Mike is advocating against the craziness that you are spewing. Put don the Foster's and read the article in the morning when you are sober.

Hi,
Thanks for your time for collecting so much information. If we consider the information you have got as facts, then why so much opaqueness in the way Nuclear plants are operated. Why the nuclear power companies don't install few radiation counters in the neighboring towns and cities.Why they hide operational historical data from public. All these things put a big question Mark on the credibility of these plants!

Yeah, nuclear plants are "safe" until something goes wrong and then what?! Tell the Fukushima and Ibaraka farmers and fishermen who have lost their livelihood how safe nuclear power is.

There is a risk in all forms of power. No one said there wasn't. The facts are that many more people die annually from emissions from coal and oil power than do nuclear power.

If you don't want nuclear power then please throw away your TV, refrigerator, and electrical devices. Then don't complain when gasoline prices go through the ceiling and you have to breathe gas fumes when you heat your home or the effects of the oil industry on the environment.

PS: Search oil industry pollution and judge for yourself which has destroyed more lives. Here's one good example: http://www.amnesty.org/en/news-and-updates/news/oil-industry-has-brought-poverty-and-pollution-to-niger-delta-20090630

Waaaaah! Mike,that's not fair!
You're arguing with facts and logic against the unarmed!

I think this is a very complex issue, and even taking a laudable, neutral pro-truth stance, it is perhaps a bit of a leap to, say, require those of an anti-nuke stance to throw away their refrigerator or what have you. One could equally demand that anyone of a pro nuclear stance must live within a certain radius of a nuclear power plant.

The twentieth century saw increased demand for electricity answered not with research and development geared toward resource conservation and more efficient consumption, but with more electricity generation and the encouragement of even more power consumption. The reason for that is obviously that power utilities are for profit commercial enterprises and their product is electricity itself, and they must grow as businesses every year.

Demanding electricity consumers to stop using electricity if they expect the right to complain about how it is generated in their community is like expecting overeaters to consume only brown rice and vegetables, or grow all their own food, when their supermarket only sells canned and frozen goods. In other words, it is expecting people to be something other than people.

Does anybody else realize that this "chart" measures deaths per teraWatt Hour? That means that if I die working on a nuclear power plant, my death contributes less to these statistics than someone dying in a coal power plant because nuclear power produces more energy. This author is purposefully putting price tags on people's lives based on what type of energy they were killed by.

Dear Anonymous,
How in the world do you want to compare deaths? In no way shape or form does coal or oil account for less deaths than nuclear power. Coal resources kill over 500 people a week in China alone! How about deaths over oil? Or does 1.5 million dead Iraqi's not matter to superior white people like you?

Yeah, what a fool. Shall we compared deaths per coal mines or oil refineries vs. Nuclear power plants? You'd still get blown out of the water. Just in the USA alone, over 1,000 guys got killed on oil platforms in the last 5 years alone. Get into reality.