This will be my 800th posting on this blog. I think it is fitting that, after all that has happened, as through the short history of this blog, the economy of Japan and most western nations are close to collapse, as Japan's national debt is over 200% of GDP, as the US government has surpassed the legal limit on the debt ceiling for that nation and into de facto bankruptcy, as silver hits a new 31 year high to nearly $44 USD an ounce and gold is knocking at the door of $1500 dollars an ounce, that this 800th blog should be about taxes and the economy.

BEATLES CARTOON - TAXMAN
Once again, the news shows that our rulers never learn their lessons when it comes to taxation and debt. After the disastrous events of the last month starting on March 11th and continuing today, once again, the government of this country shows that their only answer to our financial problems is to raise taxes.

Jiji Press reports:
Tokyo, April 18 (Jiji Press)--Japan is considering raising the consumption tax by 3 percentage points for a limited period of some three years to secure funds to rebuild areas devastated by the March 11 earthquake and tsunami, officials said Monday.
Japan will be able to secure 7.5 trillion in annual tax revenue by raising the tax rate to 8 pct from 5 pct, government and Democratic Party of Japan officials said.

The nation is preparing the first supplementary budget for fiscal 2011 with the spending amount of some 4 trillion yen. The budget will be covered without new debt issuance.
Tokyo is likely to compile more budgets for the current year, as many in the government and the ruling party believe that more than 10 trillion yen should be spent in total on the reconstruction of the disaster-devastated areas.
To finance the second and later budgets, the government will issue reconstruction bonds. Many think that the revenue from the envisioned tax hike should be used entirely to redeem the reconstruction bonds, the officials said.

It says in the first paragraph, "Japan is considering raising the consumption tax by 3 percentage points for a limited period of some three years..." Sure. Only three years, right? And after that, we're supposed to believe that the Japanese government will have their financial house in such good order and fine shape that they can cut taxes? What planet are these people living on? Has the Japanese government ever cut taxes? How, pray tell, are they supposed to be able to do that when the economy is so bad and, as I mentioned, our public debt has surpassed 200% of GDP?
History also shows us what happens when sales taxes are raised. There will be a correlating drop in sales equal to the percentage of the sales tax; raise taxes by three percent and sales will drop by three percent. And who winds up paying for this kind of sales tax hike? Not the ultra-rich or corporations who have all sorts built-in tax advantages. The rich only have to spend a few percentage points of their income for basic foodstuffs. The average middle class household is spending 15~25% or more just for survival. Hit them with a sales tax increase and you hit them below the belt.
The good example goes like this: Say, average millionaire wants to buy a new yacht? No problem. It's needed to entertain guest so it is a business and tax write-off. But, say, the single mother with a two kids whose husband has run off and doesn't pay any alimony, is not buying yachts and diamond necklaces, she is scrimping and saving to buy milk, eggs and rice. and the basics she needs to survive.
A 3% hike in her grocery bill hits hard.
The average household is is also expected to carry the burden of massive public debt created by the government. It is this government who arbitrarily decides to tax one class of poor people to give to another class of poor people (in this case, the average Japanese family gets taxed to pay for the suffering and reconstruction of the poor who suffered in the Tohoku disaster) all the while the government takes a margin for delivering these services and gives no-bid reconstruction contracts to their cronies. 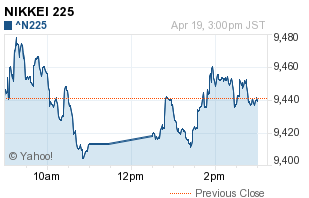 Nikkei 225 at ¥9441 on April 19, 2011
The economy is already in desperate shape. Japan's credit rating has been downgraded in the last year and the Nikkei 225 is wheezing away at under 9,500 (it is at 1/4 the amount it was at the height of the bubble economy) and it has also been reported that 15.7% of Japan's population now live below the poverty level. Think about that.
And, with all of that, with all of this suffering and misery caused by badly thought out government policies, these people want to raise taxes? They must be completely insane.


Japan owns trillions of dollars in US government bonds that were bought with tax monies taken from the public. The value of these bonds have lost some 40% over these last 10 years due to the rapid decline of the US dollar, yet, even with this, the Japanese government has painted Japan into a corner whereby we cannot unload this debt without causing a quick rise in the yen and hurting Japan's export economy. 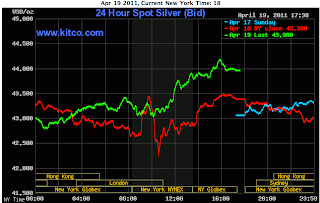 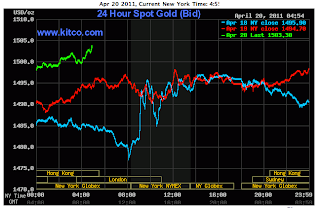 Not only that, at least twice in the last 365 days, Japan (and most recently foreign central banks) has intervened in the dollar x yen rate and flushed billion of yen (billions of US dollars) in foolish attempts (that haven't worked) in order to lower the value of then yen.


The fact of the matter is that, for reconstruction, as Peter Schiff points out, Japan should want a stronger yen as that would make our buying of oil and raw materials as well as other items needed to rebuild the ravaged areas cheaper.


But, no! As usual, when it comes to doing something about the economy, the government cannot admit its errors and try to strip them away. As is the case now, and has always been the case, the government of Japan's answer to financial problems is not to cut spending or to sell poorly valued and foolishly bought US government backed securities (that lose value every day), but the answer is, and always will be to spend and raise taxes.


That is why our economy has been so messed up for this last 20 years and that's why is is so easily predictable that our economy will be messed up for at least the next decade or more as Mish Shedlock so skillfully points out.


The politicians who live on dead and proven failure Keynesian economic policies are leading this country down the road to ruin. It will be soon enough, at this rate, that Japan will be like the Philippines. Throw this situation in with how the youth of this country have no where near the dedicated and hard work ethics of their fathers and grandfathers and you have a chemistry that spells out for a very grim economic future indeed


When we look back at what happened in twenty years from now, we'll not be surprised for a second that Japan will be jokingly referred to as the Northern Philippine archipelago.
at April 20, 2011

Japan's deluded face saving and inept government and corporate officials educated at US and UK schools will not save Japan. Global fiat debasement is accelerating. The Anglo-American Empire ( AAE ) is near its just deserved deathbed. CIA backed Yakuza feudal lords ain't saving your bacon. Following the AAE lead lemming and you deserve to go off the cliff.

Mr and Mrs Watanabe better take the "Red pill" and sell soon US dissolving toilet paper in exchange for real physical money ( Silver and Gold) held outside the banking system. Do not buy bank ( JPM and HSBC ) fraud based ETFs: GLD and SLV.

Please do your homework and seek the truth and not be a brainless lemming.

I was with you until the strong Yen issue. As a foreigner who gets paid in US Dollars and lives in Japan, my relative salary has gone down almost 20% over the past couple of years because of the strong yen. This made living in Japan almost impossible. If the Yen gets any stronger - I'll have no choice but leave.

There are other people in the same situation. Also consider the massive amount of tourists Japan will lose with a stronger Yen - tourists simply won't be able to afford Japan. And what about exports? When Japanese cars cost more than American and European brands - nobody will buy Japanese.

So to sum it up: stronger Yen might bring raw material prices down, but it'll also bring down company earnings and tourism on a massive scale - resulting in job losses and of course lower tax revenues. Of course, then they'll increase taxes another 3% to "because of the economy".

But back to taxes- raising taxes is a terrible idea and yes- if you raise taxes 3% people will just buy less resulting in LESS tax revenue. Politicians are all idiots.

Yeah... Moron... Strong yen policy? What bizarro world are you living on? Japan has a weak yen policy. It's the USA that devaluating their money.