Japan Red Cross? Too Slow to Help Out


The toll of the terrible tragedy in the Tohoku region of the earthquake and subsequent tsunami has yet to be fully accounted for. As of the time of the writing of this article, The Japanese National Police Agency has confirmed 13,778 deaths, 4,916 injured, and 14,175 people missing across eighteen prefectures, as well as over 125,000 buildings damaged or destroyed. On top of this, in the middle of a freezing winter, while the snow fell, over 100,000 people were forced to live in evacuation centers.
Surely, as time goes by, the trauma and toll will rise.
LOU REED - PERFECT DAY
Soon after the disaster hit images of the carnage and destruction of biblical proportions shocked the entire world. Who couldn’t feel the fear, desperation and utter hopelessness of the situation when viewing those images?
This one event has taught a lesson to many as to who is really in charge of the earth and that is surely not technology or humankind; Mother Nature is undoubtedly in total control.
There probably hasn’t been a natural event on this scale since the destruction of Pompeii where the Mount Vesuvius volcano erupted over the span of two days in 79 A.D. and destroyed that city under a pile of 6-meter-high ash and pumice. It wasn’t until 1,500 years later that the city, and the extent of the disaster, was discovered.
In the case of Ishinomaki and Kesenuma in Miyagi prefecture the fury of nature showed under an irresistible tsunami onslaught that crested at 10 meters high and obliterated an area of over 470 square kilometers in Japan. 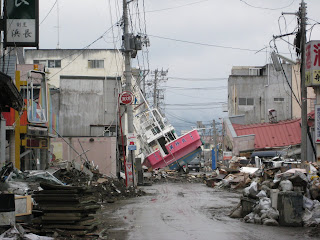 Photo of downtown Ishinomaki taken one month after the tsunami
In the immediate aftermath of the Tohoku earthquake and the tsunami disaster good people from all over the world opened their hearts and pocketbooks for well over $156 million US dollars in relief monies donated to the Japan Red Cross alone. People who viewed this disastrous event from the safety of their homes wanted to immediately help out those poor men, women and children who had suffered, lost their livelihoods and loved ones and in the stricken region.

Special: Is your charity missing out on handling potential
sponsors and getting more donations?
Upon a recent trip to one of the hardest hit areas in Ishinomaki, at a center for disabled persons, I was told that the people in the area had nothing to eat for the first few days and one banana and one rice ball for next ten days after the ordeal! (See that relief effort here in a short documentary entitled: Ishinomaki – Black Water.)
Everyone who donated to the Japan Red Cross did so because they knew of the helplessness of the situation and they knew that the victims needed immediate relief as fast as possible.
I thank everyone who donated. Never think, even for a second, that your kindness is not appreciated nor that your karma or your god... won’t someday reward you
Unfortunately, also at the time of the writing of this article, more than one month after the crisis began, Japan Red Cross has not allocated a single yen to the disaster victims. On the web page of the Japan Red Cross, in a post dated April 15th, 2011, they had finally announced that they had decided how much money will be allocated to which areas - so that the monies can then be sent to committees in those areas to be decided how they should be allocated! Odd, but something here seems to reek of bureaucracy.
This is outrageous.
I thought an organization like Japan Red Cross would be acting immediately to relieve those in desperate need rather than debating in long meetings what local chamber gets how much money or making sure their bookkeepers have their antiquated accounting in order by the end of each month. But, if this event and past scandals such as the poor handling of the relief efforts for the Katrina disaster or Haiti is any indicator, the glacial speed of reaction to crises by the Red Cross leaves much to be desired.
When people and small children are suffering and starving in the freezing cold they need help right now, not after six to eight weeks. They certainly need help quicker than the former government bureaucrats at cushy positions at the Japan Red Cross seem to be capable of delivering. Of course all collected monies and donations must be dutifully and faithfully accounted for as a matter of course, but when children are cold and starving they need relief now - not in one or two months after the books are closed.
One would hope that the Red Cross would be one of the quickest ways to personally help the victims by donating out of their own pockets. Unfortunately, that doesn’t seem to be the case. It is a sad statement about the way the Red Cross operates that whenever these sorts of crises arises, there seems to be much more criticism than praise over Red Cross efforts.
There’s got to be a better way.
-Thanks to Michio Hashimoto for photo
at April 18, 2011

All it says it that the Japan RC has now decided how to hand out CASH to disaster recipients. They have presumably been handing out blankets, food, water, torches, batteries, medecines, etc. since March 11.

Yes, many large charities are inefficient (I think Oxfam is even worse), but I won't jump to the same conclusion with you just yet.

Donating money and/or supplies to any large bureaucracy is always a mistake. Its better if you personally trust someone locally who can provide the assistance needed. What about a local temple or church?

Thanks Marc,
From what I understand, they haven't been handing out anything. This seems a repeat of Haiti disaster or Katrina.

Anyone know of Red Cross activities? Anything at all besides book-keeping?

There has been a lot of criticism of the Red Cross in general, and some in the US have suggested donating to Medecins Sans Frontiers instead. The only trouble with that is that they don't allow donations to be allocated to a specific country or disaster.

If anyone knows of trustworthy charity efforts to which foreigners could donate money or supplies that will get to the tsunami victims in a more timely fashion than through the Red Cross, I (and I'm sure many others) would appreciate hearing about them!

I always liked the Salvation Army, a real charity. Red Cross is just a business.

Private church based relief groups such as Samaritan's Purse,and as John said the Southern Baptist teams, have always been among the first ones in.

The LDS church Humanitarian Fund is a force to be reckoned with. Nobody organizes as well and responds as fast as these guys. The staff is almost completely volunteer so all donations go straight to operations and supplies.

"More than 150 tons of supplies from Church relief efforts have been distributed: food, water, blankets, bedding, hygiene kits, clothing, and fuel." This is just for the tsunami in Japan thus far.

Let me suggest a slighty unusual place to donate but one that has a personal connection in place in Japan. I get my Thai food stuff from Importfood.com and they have set up a dedicated fund with direct connections to get food to people in the affected areas so you might check them out.

The RC has become as useless as a teat on a bore hog.

"From what I understand, they haven't been handing out anything."
Unbereebaburu!
Haven't followed this closely, so must take your word for it. Damn! Wish I hadn't given them anything.

If you would like to help survivors of the Earthquake and Tsunami in Japan, I recommend a donation – BIG or SMALL – to TPRF, a favourite of mine for many reasons.

I know that TPRF are extremely nimble and full of integrity when it comes to responding to emergencies. They always make sure to choose partners on the ground with the right infrastructure and most importantly with focus on respecting the dignity of the victims. They rigorously monitor what happens with the funds.

For the Japanese emergency TPRF have partnered with MercyCorps and Peace Winds Japan (PWJ) – a Japanese NGO (Non-Governmental Organization), that is dedicated to the support of people in distress, threatened by conflict, poverty, or other turmoil. Although headquartered in Japan, PWJ is active in projects in various parts of the world. It is now able to put this experience to good use in Japan itself.

So if you feel moved to support the Japanese needing help with a donation, I invite you to follow this link to read about the project:

Or go directly to the donation page and select Japan Emergency Relief:

I would recommend contributing to Caritas Japan, a Catholic Relief Organisation. The Catholic organisations have been doing this a lot longer and so have the experience and expertise of dealing with crisis situations. In Haiti, they did the most to help the victims and continue to do so once everyone left.