Hate to say I'm right... Well, actually, no. I am happy to say that I was right when I wrote, "Japan is Collapsing."

Today over at Zerohedge they posted an article that is just jaw dropping. Please refer to: Bank of Japan Posts Whopping ¥233 Billion Loss As Its Soaring Balance Sheet Hits Record ¥156 Trillion

But... but... a central bank can never lose money. Bzzzz, wrong. As it just so happens, the world's most tragicomic farce of a central bank, and one which is about to officially lost its (faux) "independence" and become a branch of the Japanese government if the up and coming PM Abe has his way, the Bank of Japan, just reported that in the quarter ended September 30, the Japanese central bank reported an operating loss of ¥183.4 billion, and a net loss of ¥232.9 billion. As a comparison, the loss in the same period in 2011 was "only" 91 billion. This is a harbinger of the total collapse that is the utterly meaningless capital tranche of all central banks will go through before the terminal phase of the global Keynesian experiment is finally completed.  But in the meantime, enjoy this chart of the Bank of Japan's balance sheet returning back to a record ¥156... trillion. 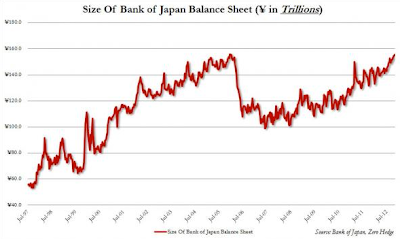 Read the rest at Zerohedge
But, but (again as some illiterates think) the 0.0007874% of the foreign public living in Japan whose corporations pay for their children's schooling are part of the problem, right? Laughable.

Update: Incredibly, there will still be some who think that private industry or foreigners are "partially" to blame for Japan's woes (polite snickering, here please) instead of government meddling in the economy. To them, may I present this also from Zerohedge: The Cost Of Kidding Yourself

"...As horrific as these results are (USA), they’re better than Japan’s, whose “lost decade” proved only to be prologue for its “lost-er decade.”  Japan’s share of the world economy fell more than 35% from 2001 to 2011 (literally worse than Zimbabwe) and has now shriveled 54% from its peak.  But Japan’s real collapse did not coincide with the bursting of its stock and real estate bubbles in 1990 and 1991 respectively.  The decline actually began in 1995 when policymakers allowed government debt to exceed 90% of GDP (a milestone the U.S. quietly passed in 2010)… 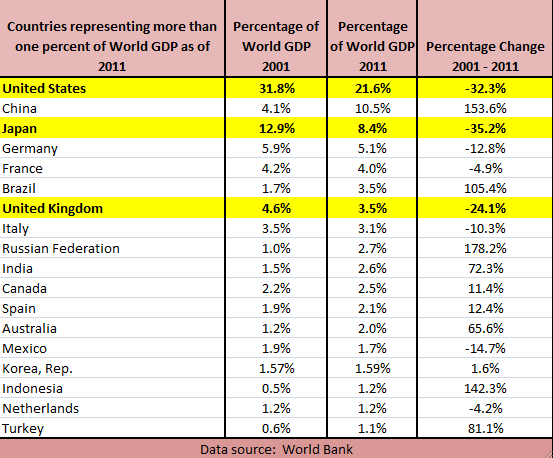 The more they “fixed” it, the more it broke.  17 years later, the only thing Japan has proved is that smart Japanese economists are about as real as Godzilla.  Time and time again, the country has chosen collapse over admitting failure. On November 19, 2012, Bloomberg reported, “The Japanese government will spend 1 trillion yen ($12.3B) on a second round of fiscal stimulus as it tries to revive an economy at risk of sliding into recession.”  It would be funny if it wasn’t so tragic.
……
To say that Japan is still growing (at least in terms of Yen), but everyone else is growing much, much faster in terms of Yen distorts the reality that  Japan is undeniably shrinking relative to the world (no matter what currency is used).

I think we both agree that its a question of when it happens, not if.