Driver's Licenses Have Zero to Do With Safe Driving: They Are a Back-door Tax!


There's a discussion about drunk driving going on amongst my friends now. I think drunk driving laws are ridiculous and should be struck from the books. Why? Because pre-crime is not a crime. John maybe driving after two beers or ten beers and be perfectly fine. But if the cops stop him they can arrest him for some arbitrarily set number on a Breathalyzer test. That's crazy. Still many people think "drunk driving" should be a crime... If they haven't hurt anyone, how can that be a crime?

I think people have some very strange ideas these days. A while back a friend wrote to me about some subject and claimed that he had the weight of the United Nations on his side of the argument. When I didn't reply, he insisted that the UN were proof positive of the truth in his beliefs. He challenged me. I responded that I had no respect at all for the United Nations and wrote, "The UN has zero credibility in my book and I think it is a tool of US imperialism... Witness how the UN supported the US in the American invasion of Iraq and Afghanistan..."

I hate voting too, but at least in a local election, you do get to vote. Did you vote for your UN representative? Nope. The UN is just like the EU: a bunch of unelected bureaucrats that have zero to do with my life and absolutely no authority to pass laws and dictate to us what we should or should not do.

See what I mean? VERY strange ideas! I wrote back,

Just like I don't see why there are laws for wearing seat belts or wearing helmets when riding motorcycles. We know that wearing seat belts can save a life in a car accident but if some guy doesn't want to wear a seat belt, then what business is it of yours or mine? It most certainly is not the government's business either. And it definitely is not a reason to tax you or me more money to put more cops on the road to stop drivers who drive without their seat belts on. If Tom, Dick or Harry want to drive without a seat belt, then let them. I don't care and it is none of my business...

Drivers licenses have zero to do with protecting the public. Haven't people  figured that out yet? Drivers licenses and license fees (for passports, filing papers, dogs, cats, fishing, open fire, killing bugs, you-name-it, etc.) are all merely a form of taxation.


Just to illustrate how f'ing ridiculous drivers licenses are AND to point out how they have NOTHING to do with safe driving and EVERYTHING to do with another form of taxation, let me tell you the story of 人力車 (man powered vehicle) or what westerners call, "Japanese rikishaw" (rickshaw) - you know the old style carts that were used in Japan long ago that were pulled by one skinny Japanese guy running in front?

Well, my friend, it used to be, when rickshaw were quiet prevalent on streets and alleyways in Japanese towns and cities, one needed a license for each rickshaw...This went on for a hundred years! There was even an organization (probably filled with retired cops) who handled the licensing of these vehicles all in the name of protecting the public (as if some guy could out run the cops in some high speed chase with his unlicensed rickshaw!) Now that these rickshaw are NOT popular and NOT in much use, there is no requirement for licensing, though the rickshaws still exist! If the licensing procedure for rickshaw were for safety of the public, then this procedure would still be in practice. But it is not. This proves that the licensing was merely to fill government coiffures.

"Oh, but that was Japan!" You say? Check your US and UK history and find the EXACT SAME story about horse drawn carts in the cities up until about 1910 or so." 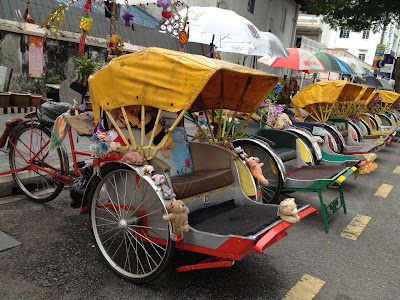 Rikishaw in Malaysia... Yep. They all had license plates!

That was discussing rickshaw to get people to see that no matter the geographical zone, government will always look for new ways to tax... Did you know that you need a license in Japan to be a sushi chef? You can bet that if the sushi restaurants in the USA were so popular and on every street corner, to become profitable for the government to increase taxes on them (businesses are already taxed up to the gills as is) then they'd lump on another  tax for slicing fish if they could do it...

And that's the way it is, folks. If, someday soon, flying vehicles become popular and there's one in every garage, do you think that the government will be licensing them for our safety? No way! They will license them because they will see it as just another profitable revenue stream. Just like fining people for driving without a license, no seat belts, no helmets, burnt out lights, out of date stickers on their car, blah, blah, blah....

Would you get behind the wheel of a dangerous vehicle that could kill you if you didn't know how to drive one? I doubt it... (and "dangerous vehicle" goes for automobiles and flying cars)... No one would drive without practice and the fact that we still have 2.9 million people injured in accidents annually (the number of accidents is MUCH higher than that) shows that the current system leaves much to be desired.

If someone wishes to risk their life by driving without a seat belt or driving drunk, then that's their problem...There is no reason why you or I should be taxed in a effort to implement some sort of pre-crime prevention scheme. In America on average, nearly 12,000 people die every year in DUI-related accidents. 900,000 are arrested each year for DUI/DWI and a full 1/3 of those are repeat offenders.

Get that? The cops are out arresting almost 1 million people a year for drunk driving... I wonder how much that is costing us in tax dollars? And, yet, still with all these arrests, 12,000 people die, and 300,000 of those arrested are repeat offenders! Obviously this doesn't work too well; it wastes tax dollars and doesn't stop the problem.

I'd guess that we have an alcoholism problem that needs to be addressed. That is, a health problem here, folks. Not a problem of locking up people.

And on top of that, drunk driving is not even the biggest cause of traffic accidents. Drunk driving is only responsible for 30% of all fatal crashes. Here are the six most common causes of car accidents.

Anyway, this is not an argument for decriminalizing drinking and driving. That subject is much better covered here. This is just a post to show that licenses (for driving, dogs, animals, etc.) are a form of taxation. Once people can accept that truth, then we can go on to discuss the next issues.

Exactly Mike san. When I had to run the guantlet to get a driver's license here in Japan, the first step was being interviewed by the lady at the DMV.

She asked about the model of car I drove when I passed my driver's test in the USA in 1979. She asked about my score on the multiple choice driver's knowledge test from 1979.

She did NOT ask about whether I had received tickets for driving infractions or whether I had killed anyone while driving. Didn't care about that.

They were happy to force me to endure some Kabuki theater driving test (always get on your knees and check under the car before driving).

They certainly forced me to pay to get the license. They cared a lot about getting their money and making me jump through hoops. Most certainly, nothing they did ensured that I was a safe driver.

Its all about money and control. Stealing my money and some government control freaks lording over the common people.