The Collapse of Old Media - the Rise of Wi-Fi Broadcasting!


It's a recurring theme in many of my blogs; the old order is quickly collapsing right in front of our faces; TV and radio are dying a slow death. Now here is an explanation how Wi-Fi could be the final nail in the coffin.

Viewership and listenership of TV and radio are sliding down a steep slope. Of course, as for TV, think about it; anyone who has the time, in this day and age, to sit for 3 or 4 (more?) hours a day, everyday, in front of the TV must either be;

Hate to be so rough sounding but I can't think of any sponsors who want to advertise or market to people who are inactive, lazy or have no money... Unless, of course, the sponsors are fast food or ice cream and sweets...

Most TV & radio stations are both heading the way of the Short-Wave or Ham radios. The Internet is allowing for totally new ways for entertainment to be delivered to a targeted audience. Why would sponsors waste huge budgets on TV advertising that advertises to EVERYBODY when they can target their select group?

They won't. That's why old media is dying a slow death. Read more about that here and here in two articles I wrote about the Long Tail. 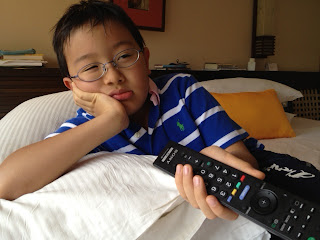 What a waste of a life. People who fear death,
yet don't know what to do with themselves on a slow Sunday.

To prove that this collapse of the old order is not happening just in Japan, here's an article from the Washington Post that talks about TV getting the worst ratings in history:

NEW YORK (AP) — Americans avoided television in historic levels over the past week.
CBS, NBC, ABC and Fox together had the smallest number of prime-time viewers last week in two decades of record-keeping, the Nielsen Co. said. Given the dominance of the big broadcasters before then, you'd probably have to go back to the early days of television to find such a collective shrug.
The first week of July tends to be among the slowest weeks of the year in television, anyway, with families more engaged in barbecues and fireworks. The problem was magnified this year because July Fourthcame on Sunday, largely knocking out one of a typical week's biggest viewing nights.
Together, the four networks averaged 18.9 million viewers last week, Nielsen said. During the season, "American Idol" alone usually gets a bigger audience than that.
I'm sure that this sort of article will be coming out less and less in the near future. Why?

Because every week will be worse than the last one for TV, radio, magazines and old media. And this sort of story is becoming old hat really quickly.

The only place that will shine from here on out is the Internet. The revolution is being televised - not by what TV is showing, but by what they don't show.

Also, and this is not yet widely publicized but, data currently shows that 68.4% of all Japanese household now have Wi-Fi. It is estimated that by 2017, that number will be over 88%. Also consider the fact that many people now use "pocket" (portable) Wi-Fi in their cars and outside. Wi-Fi is, folks, a broadcast signal.

Wi-Fi can carry both television and radio and Internet broadcasts (of course)... Now, think about this, folks...

It is estimated that a near 100% penetration of all Japanese households will be achieved by 2023. If Wi-Fi is a broadcasting signal, which it is, then de-facto Wi-Fi can broadcast TV and radio, etc. then why does a manufacturer like, say, Panasonic, need a TV or radio station for?

Think about it. A company like Panasonic wants to communicate directly with customers, but under the old order (Broadcasting laws), they can't. The middleman in all communications as of today are the mass media... But what happens to the mass media when companies like Panasonic, Sony, Toyota no longer need them and can communicate directly to potential customers via Wi-Fi? And, since Wi-Fi is an extremely short distance signal, Wi-Fi REQUIRES NO BROADCASTING LICENSE!

This means that companies like Panasonic (or your favorite company's name  here) no longer needs to pay the middleman broadcasting companies anymore. They can use their own broadcasting set-ups going into the homes through Wi-Fi... Wi-Fi has an unlimited number of channels too!

And, then, think about this, if the advertisers and sponsors can create their own content and go directly to the audience, then why wouldn't they? And when that happens, who will the TV stations and major mass media get to buy their broadcasts?

No one, I reckon.

Content will always be king, but broadcasting platforms, like TV, radio, cable and satellite TV channels are in trouble. By the way, most of the upper executives at broadcasting stations already know about this (at least the smart ones do) so what I am telling you isn't a shock to them...

Like I said, TV and radio are dying a slow death. This news isn't a revelation; it's a death sentence.

I'm surprised that we haven't already seen a greater emergence of interactive/iTV, however I blame that on the delay in the conversion from analog to digital. I see a very near future where instead of turning to your computer (or mobile device), you flip on the television to a host of user generated content (for better or worse). Waiting for the "channel" top-level domain to be released.

On a related note, I recently beta tested for The Pulse Network, the first daily talk format that combines live streaming video and social media conversation.

Good riddance I say. Interactive media with the ability to choose content is way superior to the old media.

great article and I couldnt agree more. we've been indie since day one and though its much harder and takes way longer with everything, every single last cent we earn goes right back into the band with no one else jumping in our pockets. nothing else makes sense unless you're an 18 year old dance with a voice like janis joplin meets freddie mercury and have a cure for cancer...

Thanks for the comments!

I am intrigued by the Pulse Network (http://thepulsenetwork.com) and look forward to hearing more.

Anti-Product!? THEE Anti-product!? Folks, these guys are the darlings of the UK underground today and are one of, if not the most exciting bands to come out of the United States in years! They have it all: the Look, the Tunes, the Theater, the Sexy sound!

Fact of the matter is that we use to play this band a lot on the morning drive time radio show that I used to produce and I first heard about them when they were in Japan supporting Marky Ramone's Blitzkrieg!

Of course my readers won't tell my wife this but I have a serious crush on the bassist, Claire.... Well, everyone who sees this band does.