Proudly announcing the first of the Loser Festival (appropriately called, "Loserfes") series is George Williams. LOSERFES '10 will be the very first digital festival in Japan and you are invited! Admission is absolutely free! 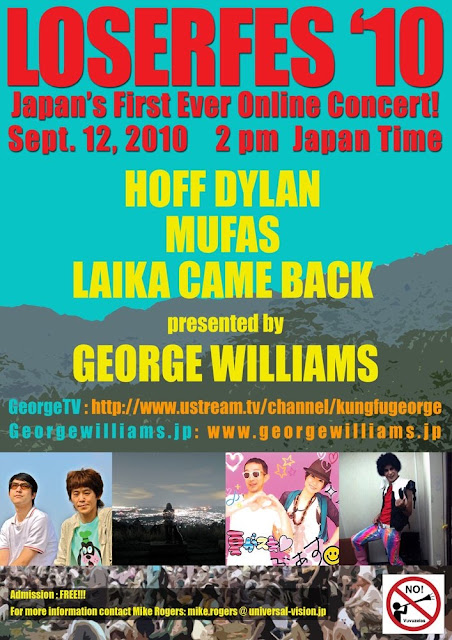 LOSERFES '10 online poster
CLICK ON POSTER TO SEE LARGER IMAGE
What is LOSERFES '10? LOSERFES '10 will be Japan's very first completely free, completely online digital concert, broadcast to you live on U-Stream (accessible on georgewilliams.jp) and the rebroadcast for your pleasure on YouTube (URL to be announced)... Free! No sign ups, no surveys, no gimmicks, no catches - it's just free!
Why LOSERFES '10? The summer festivals in Japan have become prohibitively expensive. Who can afford $1000 (USD) for a few days of music anymore?  So George and his friend, Koji Kurumatani, decided that they wanted to give something back to the people by holding a free live concert/festival for everyone in the world who has an Internet connection. LOSERFES '10 features some of Japan's best artists all getting together in a true festival atmosphere and enjoying a barbeque, drinks, sunshine, music and fun. The best part of all? You and your friends are invited!
Who are the artists performing in LOSERFES '10? LOSERFES '10 line-up for the first show is going to be a great one. Besides George Williams hosting the festival, the artists slated to appear are Koji Kurumatani as Laika Came Back, Mufas and Hoff Dylan.

How much does LOSERFES '10 cost to view? Nothing. LOSERFES '10 is absolutely free. It is a present from George and Koji, and the guests artists back to you, the people, for all these years of great support. Thank you!

When is LOSERFES '10? The show will be broadcast live on Sunday September 12, 2010. The show starts at 2 pm Japan time and officially ends at 3 pm Japan Time (but viewers to the live show get in on the after party for free too!) so set your calendars!

LOSERFES '10 background info: The idea for LOSERFES '10 came originally from George and Koji Kurumatani who decided that they wanted to extend the reach of GeorgeTV (www.georgewilliams.jp) and bring the first truly digital online show to the people for absolutely free.

Aha! The idea came! Since Indie acts are the coolest anyway - and so many of today's top Indie artists are formerly major label acts - they decided to get former major label artists onboard! George called his friends, Koji called his and they all eagerly joined in!

Former major label artists now gone Indie! They are all losers! So, we call the festival LOSERFES '10!

LOSERFES '10 "non-" performers welcome you to the LOSERFES '10. There will be gifts for those who tune in live so make sure that you are there and tell your friends. We aim for 50,000 viewers to the live broadcast.

Please come out to support LOSERFES '10! It's free and it's all for you, the people!

Seems like japan has done it again....
High-definition-media-interface
Watch it on your Sanyo HDMI 52 inch display...
Even get to record it on your DVD-W , or is that boot-legging...
Figuring out a pay-model for this kind of entertainment would increse the concept into a more risk-less business model...