Today, again, Twitter is down and not in service in Japan... Again. Not only is it not in service, their excuses for why it isn't working keep changing.

I wake up earlier than most people do, I think, and I go on my computer and do the things I need to do; check my e-mail; see how much money I lost that night... Write. Whenever I write my blog, I always use Social Media to promote what I have written. My favorites to use are Facebook, Mixi, Myspace, Pick and Twitter.

You know what folks? I have never once had any irritation with Pick, Mixi, or Facebook (sometimes Myspace irritates me) but Twitter frustrates me far too often. I've come to expect that there will be some sort of trouble with Twitter. I never expect any trouble, with, say Google.

That's the way the Internet is supposed to be. Twitter? Problems at least once a week. Sometimes two or three times.

Not only is Twitter frustrating because I cannot put enough text into the short space allowed but also because Twitter experiences technical trouble far too often. Today is the fourth or fifth time in the last few weeks that Twitter has not worked properly. Throw on top of that Twitter admitting that they manipulate their "Trending" and it makes you wonder "What good is it then?"

I became a bit suspicious about the last time Twitter claimed that their "Service was over-capacity" as I had noticed that Twitter kept changing the excuses as to why the system was down. One time the screen would say, "Over-capacity" the next moment it would say, "Technical error." They've done the same thing today.

How is it that one minute Twitter says that the system is "over-loaded" - meaning that "we are too popular for you," (you know, like the prom queen would actually attend your birthday party!? Harrumph! Absurd!) then, a few minutes later, the screen says something completely different? This time they say it's a problem of technical errors (I believe that!)

Lying on the Internet is bad business no? Or do you lie because you want some fat-cat idiot company to give you more money? Isn't that really bad business?

You already committed several cardinal sins by manipulating your "trending" topics (For proof and admission, See here) so your credibility is already questionable. But lying about your service (again!)? That is just low-grade and no class.

Check it out. Here what Twitter landing page says at this moment: 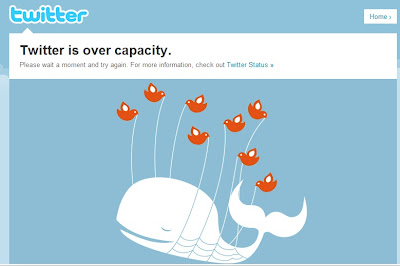 It says, "Twitter is over capacity. Please wait a moment and try again.
For more information, see Twitter status."
Folks, it is now 7:10 am Tokyo time, I have been trying Twitter since 6:30 am and this is still going on. Poor work Twitter! And, like I said, the fourth or fifth time, at least, in the last ten weeks.
No, Twitter. You are not that popular in Japan at this moment in time and at 6:30 in the morning.
But, then again, like I also pointed out, Twitter commits the ultimate sin of lying about the problem. Twitter, you are not over-capacity. That is not true. You even admit it with the Twitter status link above.
Check it out... I want more information. So, I click "Twitter status" what do I get?

This one says, "We're currently experiencing a high error rate on Twitter. Our infrastructure and operations engineers are responding to the incident."
Heck, Twitter, that's poor. I remember about a year ago when Google was having trouble with their G-mail. Sometimes it wouldn't work correctly for, oh, say sometimes ten minutes and then they had it up and fixed immediately....
You guys? Well, it's now almost an hour (at least one hour)...
This really sucks Twitter. No wonder 60% of all Twitter users quit using Twitter within the first 30 days. twitter can be incredibly boring and the service is poor.
I can honestly say that I have just about had it with you guys too. The way this is going, Twitter, while maybe not dead, will be just like Myspace or something that a few people use for a storage garage to keep their junk... I really predict Twitter will be a real dog by 2014.
As for me, just sign me, Twitter Quitter!
Twitter Sucks.
----------
Mike Rogers, Marketing Japan, Mixi, Facebook, Mike in Tokyo Rogers, Twitter, Google, G-mail, Twitter over-capapcity, Twitter high error rate, Pick, Twitter Quitter, Social Media, Japan, Myspace
at August 06, 2010

"Hey Mike. Nice mornin up here in Ibaraki. Have never twittered and never will. Pray you and the family are well. Have a good one.
C.B."

I never understood what was so great about Twitter in the first place...