The big news is about Japan's public debt. Even the older Japanese people have become worried. This has led to many problems that include poor old people not reporting to the government that relatives have died so that they can continue to collect on government pensions. I wrote about that here.

This problem with spiraling public debt in Japan is nothing new, but what is new is the perception of the Japanese themselves. There seems to be a growing realization among the average Japanese that serious trouble is around the corner and that preparations must be made.

I knew that something had seriously changed the day that my father-in-law asked me where he could buy physical gold! This from a very conservative Japanese government supporting former company president. I recommended buying gold in Tokyo from here.

From the recent news, and things that I am seeing with my own eyes, I am getting the impression that people here are getting nervous. Considering Japanese politics and how they are consistently in a state of inertia (except when it comes to spending money, raising taxes or sending our "defense forces" off to somewhere halfway around the world) then I think we are in big trouble and I think it is coming soon.

One thing that really set off this train of thinking in my mind was a visit to Shibuya the other day. It was the first time I had been to Shibuya in quite a while. I had to wait for a business associate in front of the station. Oh, how things have changed in Shibuya over these last 30 years.

I looked out across from the police box in front of the station at Hachiko and then it dawned on me: Urban decay. The place was starting to fall apart. It was dirty, the tiles on the street were crumbling and in need of repair, there was trash on the streets, and it was the kind of dirty that reminded me of downtown Los Angeles.

Forgive my rose-colored glasses, but Japan is not supposed to look like downtown Los Angeles or Thailand or Hong Kong...

No disrespect for Thailand or Hong Kong, I love those places, but looking out from in front of Shibuya
station, I couldn't tell if I were in Japan or some south eastern asian country! This might not seem a shock to you, but remember that this is the #2 or #3 economy in the world... It should not look at all like some broken down third-world nation.

I wrote in 2005 how America had become a third-world nation. It was the #2 most read article for the entire year on Lew Rockwell... It got me a ton of hate mail and even death threats...

No one complains about that article anymore. It is a given. Japan is now definitely headed in that direction. Unfortunately, I think that is a given also. 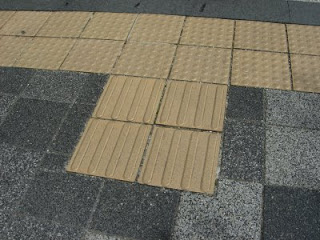 Tiles on the sidewalk to help the seeing impaired - this is what they are supposed to look like.
The ones I saw were crumbling, ripped up and completely missing in some places.

The kicker for me was the tiles placed on the ground for the sight-impaired. They were ripped up and - not just in need of repair - they all needed to be completely replaced!

Notwithstanding my basic policy of being against any government spending for anything (especially social welfare or the mlitary); I did not make policy in this country. The policy has created a huge government bureaucracy and a social welfare system. It was designed to bloat the government but also to take care of the unfortunate and down-trodden.... If that is the policy, then what kind of a country doesn't have to money to take care of the most basic needs of the most unfortunate among us? What are we taxed to death for?

And this situation was painfully visible in Shibuya no less. Shibuya!? One of the most famous shopping and entertainment districts in the world for young people. A name synonymous with fun, shopping, spending and fashion... and it now looks like a rundown dump.

Here's an article from the Australian newspaper that supports what I say, though on a bigger scale.


Japan! How could this have happened?

The processes to build and rebuild or repair roads or other constructions that were used prior to writing this was good but the cost were higher than what now it is going to cost the State to put these processes to work...
The processes now being looked at cost less per mile but are Third-World when they finish out....
The USA is also going thru the same low-budget high-budget constraints that people are talking about..

what exactly does '3rd world mean'?

In 2005, I wrote that the USA was headed for 3rd world status. I got tons of hate mail and even death threats for that one. It was the #2 most read article on LRC for all of 2005: http://www.lewrockwell.com/rogers/rogers171.html

Five years later, no one complains. From what I see, Japan, is headed for Philippines or Thailand level of collapsing infra-structure and economic decay caused by massive government spending and public debt that can never be repaid (currently at 190% of GDP).

To answer your question; I use a comparison. If the "west" is USA, Canada, West Europe and that is first world... And south east asia was third world, then I think Japan is about to join her neighbors as underdeveloped or declining rapidly. Perhaps: 3rd world means: Underdeveloped and developing countries of Asia and Africa and Latin America collectively.

So much is shifting back to Europe. It's interesting.
Laurier Tiernan

Most politicians wouldn't give a rat's ass if Japan was to become a third world country, as long as they get to have their big fat checks and benefits...

This will be the U.S. and most of Europe within 10 years—if that long.

Here's an ***awesome*** 12-minute economic documentary video, comparing the U.S. to Japan. It explains why Japan has had deflation, while the U.S. will get hyperinflation: http://www.youtube.com/watch?v=udT3dbbryEU Check it out!

Mike: you are so absolutely right, not only about Japan, but what you wrote about in regards to America's becoming (and being) a Third World country.

I live in the greater Seattle area; so far--and I emphasize the SO FAR--Seattle seems to be holdings its own; that said, the Southwest, where my family resides, is going down faster than the Titanic.

A friend in Las Vegas wrote today to tell me that she lost her home. Several people she knows in Las Vegas have also lost their homes from being laid off.

It's worse in Phoenix; there isn't anything down there to be had in terms of work or money.

And as for California, forget it; the Terminator can't afford to pay the state's employees, let alone its creditors. A very sad situation.

As with Japan, I predict that our public streets, highways, etc., etc., are going to go the way of the dinosaurs.

Thanks for writing your posts, Mike; you're a great commentator and make very salient remarks about the economy and world at large.

hanks to everyone.
Robert: You flatter me too much! (please continue!) Chuckle!
Joe: Wonderful documentary, thanks.
Shari, David, Graham: Unfortunately, yes, yes and yes.
Laurier: No way. Things are definitely NOT shifting back to Europe. Europe's decline is in the cards too (if not leading the deck!) Things are shifting to BRIC (Brazil, Russia, China, India). The EU is bankrupt too. Look for a collapse of the Euro within 5 years.

Mike, what about Singapore? You do know that multi-millionaire Jim Rogers sold his NYC townhouse and moved there with his wife and two girls. He said he chose Sinagpore over Hong Kong and Shanghai because there's no (or perhaps less) pollution there.

Singapore also is much more safe than Hong Kong and it is, in many ways, very westernized... Singapore is a great cross roads place where east meets west. Jim's girls can learn Chinese, Vietnamese, and still enjoy all the amenities that the west offers (top schools, etc...) It also is very pro-business.. Hong Kong is pro-business too, but sometimes the Chinese government does nutty things like announcing a sales tax increase on Monday night that is to begin on Tuesday. No exaggeration.