Cellphone Radiation? Probably Worse For You Than Fukushima Because It's Stuck to Your Head!

That's right. Unless you live near or around the crippled Fukushima nuclear power plants, or the nearby areas affected, then there are many things that are much more dangerous to you and your families' well-being than crap spewing out of the Dai-ichi nuclear power plant.

People need to keep things in perspective. Of course the Fukushima nuclear accident is serious business. For me, I thank God I don't live there... Actually, no. That's not true. I thank me. I'd never live close to a nuclear power plant anyway. Neither would I live close to any sort of refinery, oil producing facilities or toxic waste dumps. I always questions the sanity of people who do... I always wonder why, when something bad happens, then the people who do live near these places complain as if they are surprised by disaster.


Seems to me disaster has a way of striking all around the world all the time.


Like I said, when it comes to your health and the welfare of your family, there's lots of things you should be concerned about... If you don't live near Fukushima then there's stuff going on all around you that just aren't as glamorous as nuclear accidents so they aren't reported by the main stream mass media, yet they have a much higher chance of ruining your health or your families' health than Fukushima ever could.


Did you know that For Every One Death Due to Nuclear Power, 4,000 Die Due to Coal?


Or how about Benzene in Cars! This Will Kill More People Than Fukushima Will


And today's interesting tidbit comes from Activist Post. It is entitled Is Your Cell Phone Killing You?


An excellent infographic has been released, which covers many of the physical and mental health problems, as well as the financial burden sold to an increasing number of people who feel they "cannot live without" a cell phone.
As shown below, this obsession manifests in a myriad of ways that affect individual health and social interaction....
There is one other area key area that is not covered in the infographic, but is also worth mentioning -- the radiation effects of cell phones, especially on the young.
Experts have said that cell phones are capable of causing a number of health problems, including depression, infertility and damage to your DNA.
In 2011, the WHO/IARC released a report stating that cell phone radiation may have a carcinogenic effect on humans. In fact, the World Health Organization actually said that cell phones are in the same cancer-causing category as lead, engine exhaust, and chloroform.

Considering the hundreds of millions who live thousands of miles away from Fukushima with how much they have a radioactive device stuck to their head all day, I'd say that this issue demands some serious consideration. 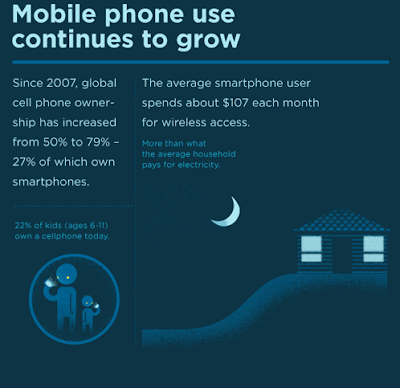 Here's more details and facts from this very interesting infographic:

2) This obsession can lead to mental and health problems 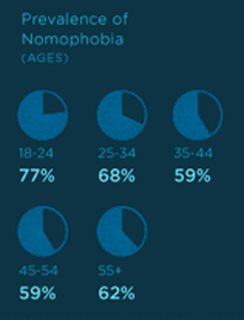 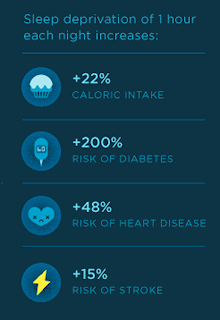 The article then goes on to suggest ways to fight back against cell phones (and I heartily agree!)

1) Turn off cell phones 45 minutes before bedtime to increase sleep quality
2) Take a trip unplugged! Go to where there is no TV, network or computers!
3) Resist constantly checking your cell phone for messages. If it's important, then they will call you

4) Turn it off at meal time
5) Turn it off during meetings and when you are not at work
6) Never use if for an alarm clock
7) Turn off your cell phone for 12 hours a day, everyday

Cell phones are bad news. Not only are they bad for your health, they are ruining people's quality of life.


One person commented to me that, "... they can't be as bad as breathing in Fukushima radiation..." To that another friend said, "No. You just shove them up a hole in your head and talk on them for hours..." Good point.

Turn those damned things off!


Refer to this great video that I wrote about at New Year's in Turn off those digital devices and learn to live again:

Not only will turning off your cell phone for at least 12 hours a day improve your life, it will improve your health.


For a related article, please read: Radiation and Reason - the Impact of Science on a Culture of Fear

As I lay awake in bed trying to drift off to sleep I kept thinking of your admonishment to Not live anywhere near a coal plant or a nuke plant. But that got me to thinking, as I understand the way smoke stacks work, you can be 150 miles or more from a coal plant and Still be affected by it.

I imagine a small fire, stand close to it and you'll not be bothered by any smoke, unlike everyone downwind. So maybe proximity isn't the be all to end all?

In my area, if you want a job, you have to be where the smokestacks are,... for the most part. In my case, if I move thirty miles away I'm in an area which is very polluted from a corn processing plant, among others.

... There are no easy answers it seems. There is no escape?

And sometimes I think everyone should live where there are no mosquitoes,... I'm not sure I can get to Antarctica, nor survive there. Psft, and they probably have mosquitoes there too anyway?

Ok, now I can go back to bed and think about other things as I drift off to sleep. Like how families are being dismantled by just a sh...... of things.

Perhaps I will just think about the photos in your blog post, The Ultimate Japanese Song and Karaoke: Four Minute Taste of the Essence of Japan: 浪花節だよ人生は,... that looked like fun. I'll bet they even knew how to play quarters and I wouldn't have to teach them. ... I did that once. At the time I felt great about it, now,... I kind of feel like I corrupted them.

Coal is going to kill me, but I have a plug in headset for the cell phone.

what will be will be.