I've had an experience the other day that has shown me, once again, that too many people have lost touch with reality, have little common sense and watch way too much TV...


The ones who think TV is good or can be useful are, of course, fans of TV. I got one of these mails the other day. I had written, "I hate computer games of all kinds... (They are a) waste of time like TV." To which a reader replied:


Actually, computer games are proven to increase not only cognitive abilities, but even eye-hand coordination.

Then again, television is also a very useful tool, that can be used to widen experience far beyond what normal people have available. It's very politically correct to decry such things, but fallacy.


This is patent nonsense. Calling it "politically correct" is supposed to belittle criticism of TV. In recent years, calling something "politically correct" has become the easy way for people who cannot support their arguments with facts or common sense to escape rational, logical discourse. Then the writer then goes on to offer no evidence to support his claims besides saying it is "fallacy."


He also mentions that "computer games are proven to increase not only cognitive abilities, but even eye-hand coordination"!? Madness! What? What kind of a fool actually believes this (excepting if he is a fat and over-weight American couch-potato or game salesman?)


First off, what are "cognitive abilities?"


What is cognition? Cognition has to do with how a per­son under­stands and acts in the world. It is a set of abilities, skills or processes that are part of nearly every human action.


Catch that? "How a person understands and acts in the world." It isn't rocket science to figure out that what goes on in a hand-held game like a DS or Playstation has little to do with the real world. And the part about eye-hand coordination is also nonsense. Perhaps it would be good for eye hand coordination if you wanted to shoot people in Pakistan with hell-fire missiles while you sit from your office in Quantico, Virginia.


I wonder how well, say, a guy who can score and continually win at a game console baseball software would do with his "eye-hand" coordination catching a ball or hitting one with a bat in the real world? Not too well, I suppose.


It isn't rocket science, like I said. It doesn't require genius to figure out that that sort of thinking is nonsense.


Playing computer games is only good for "cognitive abilities" and "eye-hand" coordination confined to the computer world.

TV and computer games are a vicarious experience; their relation to real world experiences are negligible.


The other part of what the reader wrote that is completely absurd is the that games "are proven" to "increase ... abilities." Proven by whom? By research funded by game manufacturers? That's like using research funded by tobacco companies to prove that cigarette smoking isn't bad for you too! And, yes, Virginia, there are still many of those! In a 2006 article on the Independent UK, research showed the benefits of cigarette smoking!


Sure! There are benefits to smoking and some good things about cigarettes! Just like there are some good things to playing computer games... But the negatives by far massively outweigh the positives and to think otherwise is just plain foolish.


You don't, though, need hundred million dollar research to stop for a moment and use some common sense to see that inhaling the smoke from burning matter can't be natural or good for you, just as anyone with a lick of common sense could see that our children becoming zombies playing computer games can't be good either.


The lowering of academic scores in American school since the 1950s speaks for itself. The startling and escalating decline in the last ten years is startling.


Sure, but don't worry. Research shows that TV and computer games are good for you....


Sure, research funded by big corporations show you that, regardless of what your common sense tells you.


(PS: I know some defender of games will say this, so let me cut them off at the pass: When I say, "game" I mean the typical hand-held game kids play or the average home Playstation or like system. I am NOT talking about some multi-million dollar simulator that are used for pilot training or such. As Deleuze and Guattari write, "Simulation does not replace reality, it appropriates reality. It can't replace it." I also doubt that the average home has a million dollar simulator in the living room.) 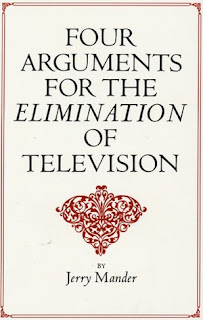 Consider this passage from Four Arguments For The Elimination of Television by Jerry Mander:
I asked ... prominent psychologists, partly famous for their work with hypnotism, if they could define the TV experience as hypnotic and, if so, what that meant. I described to each the concrete details of what goes on between viewer and television set: dark room, eyes still, body quiet, looking at light that is flickering different ways, sounds contained to narrow ranges and so on. Dr. Freda Morris (former professor of medical psychology at UCLA and author of several books on hypnosis) said, "It sounds like you are giving a course outline in hypnotic trance induction."
Dr. Ernest Hilgard, who directs Stanford University's research program in hypnosis and the author of the most widely used texts in the field (said), "Sitting quietly, with no sensory inputs aside from the screen, no orientating outside the television set is itself capable of getting people to set aside ordinary reality, allowing the substitution of some other reality the set may offer. You can get so imaginatively involved that alternates temporarily fade away. A hypnotist doesn't have to be interesting. He can use an ordinary voice, and if the effect is to quiet the person, he can invite them into a situation where they can follow his words or actions and then release their imagination along the lines he suggests. Then they drift into hypnosis."
Now, if anyone were really honest about this, how could they say that the typical watching of television doesn't fit the same conditions necessary for hypnosis? Of course, some people will scoff at the idea that hypnosis is anything but Quack Science; for those I suggest researching the Department of the Ministry of Truth as described in George Orwell's Nineteen-Eighty-Four or Soma as referred to in Aldous Huxley's Brave New World. I suggest researching these two only if I can get those of you who still believe television is good or neutral to turn it off for a moment to bother to pick up and read a book. 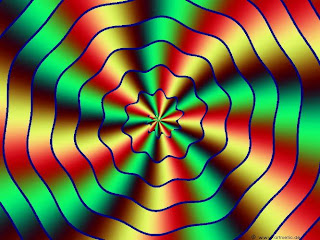 The point of this is to show that television is a form of hypnosis. Hypnosis is described as "suspension of the critical factor" which expands on the idea of "increased suggestibility." A person who is hypnotized may accept statements as true that he or she would normally reject.
This may go to explain why Americans are often so ill-educated, uniformed, and uncaring about world events as well as events happening in their very own country since their main pipe of "knowledge" is an electrical device whose output is completely and totally controlled by the American government and its bed partners in the military/industrial complex. Since the fact that television is controlled by major corporations along with its prostitute Big Brother — and always will be, due to exorbitant costs — it should be self-evident that television is not neutral, is not a tool for the users, and, therefore, it cannot ever be reformed.
Do not confuse my message here. I am not an anti-capitalist. Capitalism and the free market, with all its warts, is still the best system man has ever devised, but I don't need to be homogenized to enjoy living in a free society. In fact, homogenization of thought is the very antithesis to a free society. 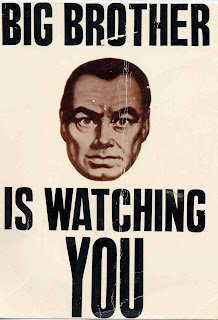 Email ThisBlogThis!Share to TwitterShare to FacebookShare to Pinterest
Labels: brainwashing, business, computer games are bad for you, little common sense, lost touch with reality, lowered academic scores, mass media, too much TV, TV hypnotic, TV is bad for you, TV waste of time

That's the problem with common sense Mike, it's not so common! TV and social media overload all contribute to unreality... - "Destroy She Said".

And then there's youtube, often linked to on these pages...
I would be interested in knowing if, in addition to the hypnotic state, TV also causes overstimulation (ie the dopamine rush) that makes regular conversation, life, reading, etc. seem gray and bland in comparison.
As for the reader's comment, yes, it is well-known that if you practice something for hours and hours daily, you will get better at that thing. So all the guys I see playing sudoku on the trains, unfortunately, are only increasing their ability to play sudoku.

Reading the essay also made me think of the internet. Do you believe that the internet is much different compared to TV? Instead of just staring at a screen, one stares at a screen, and then points and clicks. This is called “interactivity”. I guess in the same way that a videogame is considered interactive. If one goes into many cafes, or even restaurants currently, everyone seems to be “interacting” with their screens. I don't believe that the same could generally be said about the rest of their environment.

One though must earn one's daily crust. What effect has it had on you, being on the other end of the camera? With that being said, if watching TV rots your brain, what does producing TV do? Would you recommend that a university graduate go int o TV media production?

Could it be said that as a factory might ruin the physical environment, that television ruins the mental environment?