I am in the midst of writing a longer post about cockroaches and collective punishment. But in the meantime I thought you'd crack up at this hilarious picture sent to me by a friend of mine.


His name is Toshitaka Taniguchi  and he is the guy standing on the right. He's pretty flipped out and works as a tattoo artist. He also plays guitar in one of the worst punk bands you'll ever see... So, I guess, that could be construed as meaning, one of the better ones.... Well, they would be good if they'd practice and not drink so much that they can barely stand up when they are on stage. 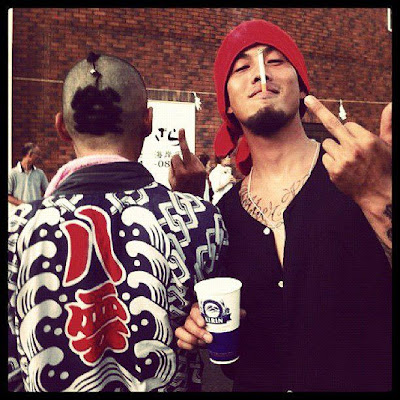 The guy on the left is dressed for a matsuri (festival), probably in Meguro as his happi (shirt) says, "Yagumo." Yagumo is an area of Meguro.


The really funny part is that the guy on the left has his hair cut so that it says, "Matsuri" on the back. I've never seen that before!


Funny stuff by Japanese punks... There's something that seems complimentary about Japanese tradition and the colors (and some of the craziness) and punk rock... Can't put my finger on what it is exactly, but it seems to match. 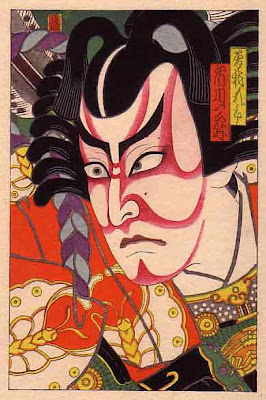 Japanese punks and Kabuki... I don't know, but this guy looks like he could be the lead singer of a very loud rock group.


And yet another example of yet another good thing about Japan. Even though these guys are punks, they still follow Japanese tradition and respect their elders and participate. I think it's cool.

I can dig it Mike... I Like that the boys are doing their own thing but still show respect (not to the photographer, of course) but isn't a punk someone who rebels against the rules of society?
Hell... I guess I was a suburban punk.