Two interesting articles out this morning. The first one concerns the government of Japanese Prime Minister Noda approving a 200% Sales Tax increase. Fools!


The Japanese government on Friday approved a politically charged bill to double the national sales tax, taking action after prolonged wrangling within the ruling party and narrowly avoiding an embarrassment for Prime Minister Yoshihiko Noda. The Cabinet approval finally clears the way for Mr. Noda to meet his promise to bring the bill before parliament before the March deadline stipulated by the tax law, with attention now focused on parliamentary debate, expected to begin in early April.

Passage of the bill, which would raise the tax to 10% in two stages by 2015, is likely to be far from smooth.


A large bloc of lawmakers from of Mr. Noda's ruling Democratic Party of Japan is threatening to vote against it, due mainly to worries that a tax increase would derail Japan's fragile economic recovery.


Mr. Noda also has yet to win support from opposition parties who are expected to use the issue to further pressure Mr. Noda to call a general election. Their support in the upper house of parliament is vital for the measure to become law.

-- The rate will be raised to 8 percent in April 2014, before being further increased to 10 percent in October the following year.

-- Relief measures will be introduced for low-income earners, such as tax exemption with the provision of benefits.

-- Full-fledged discussions should begin on establishing a national revenue agency.

-- An economic turnaround should be set as a condition for implementing the higher consumption tax rate in the future. The government should achieve a nominal economic growth rate of about 3 percent and a real growth rate of around 2 percent, while also implementing necessary measures to achieve the target.

-- Through comprehensive examinations of economic and other conditions, the government should consider suspending the implementation of the higher tax rate or other necessary measures.


That a large bloc of his own party members will vote against this law shows that this is the death knell for the Noda government. Never mind that opposition parties are dead-set against it. I've written about how raising taxes without cutting spending at the same time will not fix Japan's budget and debt problems. I've also mentioned that until this really becomes a major crisis, then the Japanese people will not tolerate a sales tax increase. The most recently was just about a month ago: Japanese Prime Minister Says he Can Get Sales Tax Doubled - I Predict He Will Be Out of a Job by September 2012:


There won't be any sales tax increase under this prime minister. He will be out of office if he really tries to do so. The crisis amongst the public and the political circles hasn't come to a boiling point (because people don't understand how exponential growth of our debts and interest rates on those debts are going to affect us). And, until this really hits home, people will not tolerate a sales tax increase.

We're way past that anyway. Even with a tax increase, if it is not coupled with a massive decrease in government spending, it will not matter because our debts will continue to accumulate along with the interest on those debts. Past history has shown that tax increases will not help as the government will deficit spend any increase in revenues it gets. WhenNoboru Takeshita was prime minister and instituted sales tax in 1988, he claimed that it would end our debt problem. It didn't. It couldn't without a cut in spending. After years of borrowing, we are already well past double the GDP in debt. We need to begin paying down that debt before any talk of a sales tax increase will even matter. That means we must massively cut spending right now.

This is basic mathematics, folks.

We need to cut spending, including interest on our debt - as well as paying down that debt to under what is received in revenue - as well as having tax increases to fix the problem we are in. I am against any and all tax increases especially if they aren't coupled with massive cuts in spending - and that's not cuts in future proposed spending, that's cuts in today's current budget.

It's simple. If you get five, you cannot spend seven.

Without massive cuts in today's current spending, they can raise taxes to the moon and it won't help. Either way, I predict that this tax increase hasn't the chance of a snow-cone in hell of passing into law. The Noda government is extremely unpopular. The Daily Yomiuri reports in Noda Cabinet approval ratings slides to 30%:

The approval rating of the Cabinet led by Prime Minister Yoshihiko Noda fell to 30 percent from 37 percent in a January survey conducted immediately after a Cabinet reshuffle, a Yomiuri Shimbun survey has found. 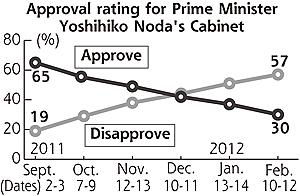 This trend doesn't bode well for any tax increases. Expect the next survey to have Noda in the low 20s.

In the nationwide telephone survey conducted Friday through Sunday, 57 percent of the respondents said they disapproved of Noda's Cabinet, up six percentage points from the previous survey conducted Jan. 13-14.

The approval rating of the ruling Democratic Party of Japan fell to 16 percent, down nine points from the previous survey and marking the lowest rating since the party won control of the government in September 2009.

The survey results suggest Noda is likely to face a difficult time ahead in his policy management.


Interestingly, it seems that while I was writing this blog post, the coalition government is already falling apart. Refer to: Government junior coalition partner already starting to unravel over consumption tax bill:


On Friday, PNP leader Shizuka Kamei said he would pull his party out of the coalition after the cabinet approved the bill. “We joined the government based on its 2009 election manifesto that it would not raise taxes,” Kamei said, according to TV Asahi.
This consumption tax increase proposal is dead in the water before it even gets launched. This really makes you wonder about what Noda is thinking. Proposing a sales tax increase when the economy is so bad and things are so difficult for the average person just shows how completely out of touch these politicians are to the public. They can only think of one thing and one thing only to fix budgets and that is raising taxes...


Our problems are debt... Raising taxes causes spending by the public to decrease proportionately... We need to massively cut spending! When will they ever learn?

“We joined the government based on its 2009 election manifesto that it would not raise taxes,” Kamei said

hEH, they were fooled by a "Read my lips, no new taxes" bs line.

Some things are the same the world over, eh?

Also, I wonder if things will be impacted more-so in Japan if indeed this is the case?:

For those of you who have followed politics in Japan, you know that there are certain elements in the government that want to change the constitution so that amassing a fighting military will be the main objective of the future.

Along with a military, which includes an army, navy, and air force, comes the usual assorted essentials such as guns, bombs, jets, ships, rockets, and so on. This also includes people to shoot and operate everything.

If you follow the trail, it leads to a vast amount of money that will be needed in the future. Question: Where will all this money come from?

After all, do you really think they could raise the sales tax in the future for the purpose of raising an army to kill people. Not hardly. Better to do it now on an unsuspecting public who thinks Japan doesn't have any money.

Of course there is the problem of the millions of dollars missing from the Japanese pension plan that hasn't been adequatly explained. I guess they're hoping people will just forget about that one.

And the fastest computer in the world? How many millions are they spending on that turkey with "money they don't have"? And the space program. That's really necessary - NOT! Or, how about the millions the spend on the emperor and all the emperor's relatives. Millions. Mostly to people who don't do anything.

How about money given to other countries like Burma, China,and countries in Africa and so on. How about the millions spent on alcohol at Japan's embassys all around the world. All of this is just the tip of the iceburg.

The point being, they have money, so why would they want to raise the sales tax? Guns and more guns.