The Japanese Riot! Demanding Withdrawal From Korea! And Closure of Narita!

Yesterday I posted the story about how far American society has collapsed with the story and video of fighting - as well as people getting run over by a car - while they waited in line for a job at McDonald's.

Things are very bad in the USA and they are going to get much worse.

The economic problems in Japan are very bad too, but there is one saving grace about Japan and the Japanese... They don't riot and protest and go batsh*t crazy and violent like the Americans do. Do they?

Here's a link sent by regular reader diego.a with a 1961 video about a "riot" against US troops.

More proof to add to your article: Japanese Students Riot Demanding US Withdrawal

No riot gear costumes, tasers, or pepper-spray. Few nightsticks, but lots of pushing and shoving. You could get more injuries at a soccer match riot. Even their motives were better than US rioters. They are even better dressed. I even had to go back to 1961 to get this!

Thanks diego.a. Cool video!!! But wait a minute! Is it true that the Japanese are too docile and absolutely will not riot like westerners? I'm not too sure about that. Here is a video from Oct. 20, 1985 of a left wing group known as Chuukakuha leading a riot in an attempt to stop Narita airport expansion. Especially pay attention from about 1:00.... This will blow your mind. The sh*t really starts hitting the fan from 2:00 ~

Here's some more from riots and demonstrations against the original construction of Narita in the late 1970s.  I remember these well. In the first video, the demonstrators actually took over, sacked and occupied the control tower at Narita:

The next video is from a collection of unedited videos of the riots. I have added the first of the series here for you.

If you wish to see the rest of the series, click here: NARITA STRUGGLE 1978 成田空港管制塔占拠. If you want to see many riot videos in Japan, click here.

Oh, and there's lots more where these came from. Here's a photo of Japanese students rioting against the renewal of the US-Japan Security Treaty in 1960: 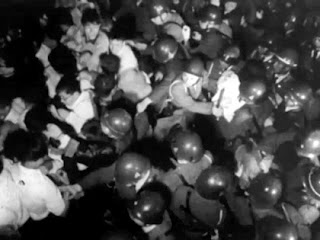 So, perhaps thinking that the Japanese won't riot and are too docile maybe a bit presumptuous... What happens when Japan is no longer an extremely wealthy country and the youth have no jobs?... Like it was in 1960?

I wouldn't worry about it too much..... For now.
Even if there is a riot, it would be no where near as bad as US. Not even close.
After all Japan is a peaceful country.

Japan is a very peaceful country. In japan, people riot when their homes are taken away or when nuclear carriers dock at Japanese bases in violation of the Japanese constitution... In the USA people riot when the Lakers basketball team wins the championship or when someone cuts in line at McDonald's.... Expecting Americans to riot when the government screws them?

Thanks for posting these videos. I never knew about the Narita construction and expansion riots.

What about the "Rice Riots", or "Kome Sodo" in 1918? They lasted three months, with thousands of people arrested and loads of police stations and town halls etc being burnt down. Price of rice got too high for people to afford, so they trashed the whole country. Ninety years ago, it couldn`t happen again, surely? Also, there were riots in the seventies in Okinawa I think, when a GI ran someone over. The mob burnt down the local cop shop.