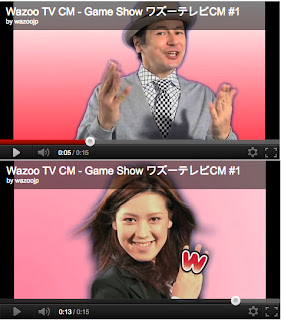 
I directed the commercials and camera work was by Ken Nishikawa and we both edited them together with Ken doing all the hard work and me sleeping on the sofa.


The commercials are all in Japanese (duh! This is Japan) but hopefully you can enjoy them.


The first one is a play on words and makes fun of game shows.

The first guy holds up the Paipo and says, "With this I stopped smoking." The second guy does and says the same thing. The third guy holds up his pinky finger and says, "With this, I quit my job." In Japan, holding up a pinky finger means "having a girlfriend" or "woman." The joke is that it insinuates he is married and was having an affair at work so he was forced to quit (by his wife or boss, we don't know).


Here is our commercial parody:


We parody the same commercial, but, at the end, the third gentlemen holds up three fingers like a "W" meaning Wazoo. And he says, "With this I made an event!"  Wazoo is an D.I.Y. online social media ticketing service for events and allows regular people to sell advanced tickets for all their events, get-togethers, and seminars without having to pay outrageous sums to the standard ticket agencies. It also allows for companies to do data mining so that they can research their users. See Wazoo's site here: http://www.wazoo.jp/ (Sorry Japanese only for now).


There's a few more commercials in the series. I hope to have some more perhaps later this year or next year. Making TV commercials is fun.


NOTE: The first TV commercial began running on the TV Tokyo network on Feb. 1, 2012. The Paipo parody was, unfortunately, banned because of political correctness as the stations said some women's group complained that the upright pinky finger is discriminatory to women.
at March 01, 2012

Those are pretty good. I've always wanted to make commercials and other funny videos for money. Maybe someday it will happen. Are these going to be airing on any major networks any time soon?

Hi Jimbo...
We got paid very little to make these...
The first TV commercial began running on the TV Tokyo network on Feb. 1, 2012. The Paipo parody was, unfortunately, banned because of political correctness as the stations said some women's group complained that the upright pinky finger is discriminatory to women.

What other hand signs are popular with the Japanese? The only ones I remember are first, having the hand held vertically by the side of the face, as if telling a secret, which if I recall is done when talking about if someone might be gay.

Second, the one with a finger drawing a line near the chin/neck as a signal if a suspected yakuza might be present...