The Ultimate Japanese Song and Karaoke: Four Minute Taste of the Essence of Japan: 浪花節だよ人生は

Ever wanted to go to Japan but couldn't afford it or just haven't had the chance to? Well, here's your chance, folks. This short blog post will give you one integral part of anyone's vacation to Japan all in just under four minutes. 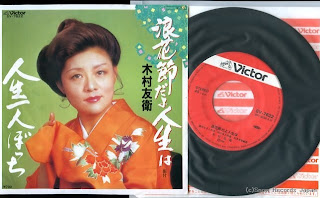 Kimura Tomomi made this song a standard Enka classic


Ask any foreigner whose ever been to Japan and partied with Japanese people and they will tell you that this, if anything could, captures one slice of the essence of Japan. Laugh now, but it's a Karaoke video.


Let me set up the situation for you (as it happened to me!): You've been in Japan for one or two nights and your Japanese friends want to take you out eating and drinking. Of course you want to go and do.


Of course you start off drinking beer. Everyone makes a toast and, instead of yelling, "Cheers!" they yell "Kampai!" (You just learned a very important Japanese word!) 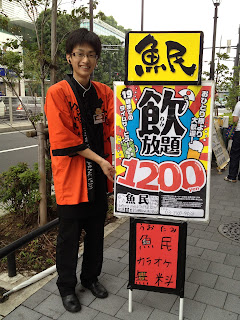 
After drinking and eating some,  then your Japanese hosts start drinking something else. It's probably sho-chu (Korean liquor). They ask you to try it. Heck, you're in Japan for the first time. What the heck? You'll try anything once. You do. The sho-chu is great! You drink a lot of it.


More food comes and you continue to eat and drink. Everyone is speaking Japanese so you haven't the clue as to what people are talking about and what's really going on, but you don't care... You're having a blast!


Then, it's on to the Japanese sake!


You get tipsy and have to go to the restroom... It's one of your first forays into Japanese world by yourself. The restaurant mama points you in the direction of the restroom. You walk in. You think, "Woah! These rooms are tiny! And what's that water faucet doing over the toilet water tank? Is that water clean?"


When you return to your table, your friends continue with the festivities. You've eaten and drank to your hearts content. But, no! This is Japan! We have to go to somewhere else! Your friends want to go to Karaoke! You hate Karaoke, but you go anyway.


Outside, as you walk the city, you are blown away by the neon lights and the pretty girls who are just everywhere! What a sensory overload...


And the city is clean and the sidewalks are safe. There is no crime to fear! Heck, the most dangerous person in the entire 1 mile circumference of where you are is probably you!


You get to the Karaoke club. You haven't a clue as to which direction you came from. The club is a nice place. You go in. You drink more! It's a blast. "Wow! Japanese people are good singers!" You think (but no. They just are used to the controls of the Karaoke machine!) Everyone sings. You watch.


Then, the ultimate "Japanese song" and "Japanese Karaoke Video" comes on.... Like I said, this one video, at least for me, encapsulates the entire thing in just under 4 minutes.


Later, your hosts make sure you find your way back to where you are staying... The next day, you wake up with a hangover...

As obvious as it might seem from the name of it, karaoke isn't often known to have originated in Japan. I'm a teacher and I get all the kids to indulge in a program that we call Sing To The World and I love teaching them about the history of karaoke. Or "kareoke" as they often misspell it...