If You Don't Speak Abbreviated Japanese Then You Are a Loser! Fluent in Japanese and Still Don't Understand What People Are Talking About? Join the Club!

The Japanese like to abbreviate their language all the time. It's called "省略語” (sho-ryaku-go) and means exactly "abbreviated language." The Japanese abbreviate everything. It drives me crazy.

Needless to say the curriculum at my Japanese language school was a tad bit outdated.

Especially the younger Japanese. They use abbreviations of common words in daily language all the time. It's gotten so bad that I often have a hard time understanding what they are talking about. Funny thing is that it seems many Japanese people have the same problem.


While being far from a Japanese conversation master, I do know how to hold your basic run of the mill conversation in standard everyday Japanese...


Let me prove it to you. For example:


"Good morning, Suzuki san, how are you?"


"No. I haven't been having problems with hemorrhoids recently. And you?"


See? Pretty good, eh? Of course I translated that conversation into English for you as most readers of this blog don't speak Japanese. But it takes a pretty diligent student student of Japanese language to know words like "hemorrhoids" (or an urgent need to know the word - or repetition of said need - so that one can explain quickly to a doctor!) 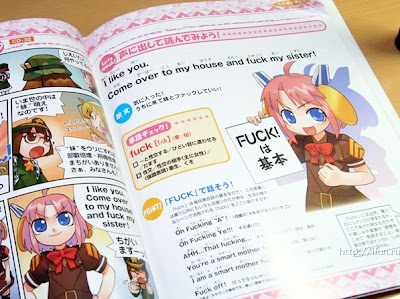 I think I'd have a tad bit of a problem teaching this English to my female students.


So, I'm pretty slick when it comes to jowling with the locals. But, when it comes to modern dialect that includes common abbreviated lingo and vernacular, I haven't a clue as to what people are talking about! It's maddening especially with new words that come into the Japanese dialect and then are twisted beyond recognition.


Later on I figured out that "sumaho" was the abbreviated word for "smart phone." He was asking me, "Is that a smart-phone?"


It wasn't a smart phone but an iTouch looks exactly like an iPhone which is a smart phone so I turned it off. He was really mad!


The Japanese like to abbreviate everything! I can't keep up. So many times people will be talking about something and then a new word comes up and I haven't a clue as to what they are saying. I remember a few years back this dumb 25-something year old girl that I had to work with spoke like a 13-year-old dippy student. She would say, "Me and my friends are going to meet at maru-kyu."


"My friends and me!" Dumb broad! Jeez! Brought up under a rock!... Anyway, "Maru-kyu," I'd find out later was the famous Japanese department store 109, usually called "ichi-maru-kyu." That dumb girl and her friends were too busy to say "ichi" (one) so they dropped the "one" and just kept the "oh - nine" as in "maru-kyu." No one else besides her small circle of friends would have any idea what she was talking about.


...That's okay, though. That girl was so daft that half the time she didn't know what she was talking about either!

Several years ago, I used to have this same problem at Japanese radio stations. One girl kept talking about "Sumapa." I didn't know what she was talking about. She said she loved "Sumapa". She meant Smashing Pumpkins! And every Japanese under 40 knows that "Misu-chiru" is the Japanese Pop band, Mister Children.


There's a million and one of these abbreviations and they've been coming faster and faster as technology and the Internet progress. Many years ago, "pasonaru konpuuta" (personal computer) was abbreviated into "paso-kon." That one was easy to figure out. A wireless controller for radio controlled devices "rajio kontororu" (radio control) became "raji-kon." And, my favorite, and everyone else's, Loilta Complex became "rori-kon." (I've always wondered why Lolita Complex was such a heavily used word that we needed an abbreviated version for, but, well, this is Japan.)


But yesterday, while sitting on the train, I overheard a conversation between two high school girls who were sitting next to me talking very loudly and I wondered if their mothers wouldn't wash those mouths out with soap if they heard what they were saying. I was shocked!


They were talking about a friend and they said, "ona-chu." Yes! They did! I heard it. I was shocked! Here were two extremely cute sexy Japanese high school girls in their sailor uniforms talking about what goes on in their bedrooms without a care in the world!


I cleared my throat and tried to act like nonchalant. I looked around at the other folks sitting down next to the girls and across the aisle. One lady was reading a book. A guy was sleeping on the other side of the girls. A few other people were standing. Two old ladies sat right across from me, staring at me and not saying a word. I wondered what those old ladies were thinking? It wasn't my fault these two high school girls were talking about being in the middle of masturbation! No one else seemed surprised by these girl's conversation except me.

The conversation was making me nervous. I loosened my neck tie and wiped a bit of sweat from my brow. When, suddenly, they said it again! Only this time very loudly! They were even laughing about it! Those sex-starved little kittens!


Well, my train station came up and I quickly jumped off the train before it got even hotter in there. And, on reflection, I began to really come to realize that all these comic books fetishes and fantasies of these dorky guys in Japan were probably true about sexy Japanese high school girls! They wanted it and they wanted it all the time! They even spoke about it and did it freely on the train and no one else seemed to care! Extraordinary!


Later on I cooled down a bit and tried to control my fluster with a cold shower as soon as I got home. I began to tell my wife about how far Japanese kids have fallen into degradation and sin. I began to tell her about, "ona-chu."


But before I could start, she interrupted me and said, "Oh? Ona-chu, means 'onaji - chugakko.'"


For some reason, this is dedicated to my friend Roger Marshall

I like the abbreviation for a popular Japanese fast food joint called "First Kitchen". They say "Fa-Kin". Do you like "Fa-Kin"?

Mark! That's funny! God damn! I'm old. My wife says my daughter says that and I didn't even know it! Hilarious! Thanks!

This article of yours is really funny. One of the best that I have read while following your blog.

Btw I have been trying hard to learn Japanese from those Eng-Jap daily speaking books but to no avail. That snap shot of the book seems interesting.

Hence would you be kind to share with me the name of the English-Jap learning conversation book (the picture of cartoon explaining "FUCK" in japanese) which you posted in this article of yours? And where can i buy it in the Net?

Tim,
Thanks. I don't know the name of the book, sorry. But, I'll bet if you print that photo and took it to a big bookstore, they might know. Find the name, then order online! (Actually I pull that one sometimes too!)

Aw...I thought you had that book and took a pic to post in your article.

The trouble with my local stores here is they won't be selling such books. Deems as inapproriate materials here. That is why I was keeping fingers crossed that I can grab the book from the Net with the title from you. Sharks....

Ona-chu...it could have been onara.
Regarding Smashing Pumpkins, I got a call from a girl I knew who worked in a bondage pub while they were in town. She said she had a bald gaijin customer who claimed he was famous, and in some band called "Smashing... nantoka." She asked if I'd heard of them.
Of course I said no, that he was probably just some English teacher trying to get laid.
I figured, let him work for it for a change.