In ancient Japanese folklore, it has been said that catfish are the causes of earthquakes. In modern science, scientists study the reaction of catfish prior to earthquakes. It seems that there is a correlation as recent studies done at Japanese universities have shown. 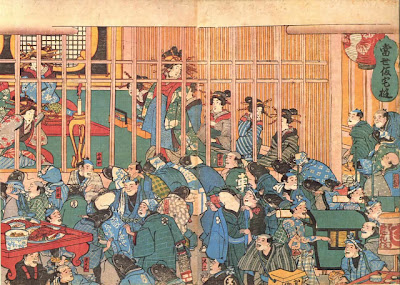 
Wikipedia has a good and simple explanation of how catfish (Namazu) fit into Japanese mythology relating to earthquakes and Ukiyo-e (woodblock prints):


In Japanese mythology, the Namazu (鯰) or Ōnamazu (大鯰) is a giant catfish who causes earthquakes. He lives in the mud under the islands of Japan, and is guarded by the god Kashima who restrains the catfish with a stone. When Kashima lets his guard fall, Namazu thrashes about, causing violent earthquakes. Following an earthquake near Edo (modern day Tokyo) in 1855 (one of the Ansei Great Quakes), the Namazu became worshiped as a yonaoshi daimyojin (god of world rectification).[1]


Namazu-e (catfish prints) are a minor genre of ukiyo-e. They are usually unsigned and encompass a large variety of scenes such as a namazu forcing the wealthy to excrete coins for the poor, and a namazu atoning for the earthquake he caused.


It is believed by some that the origin of the story is the fact that catfish can sense the small tremors which happen before an earthquake, and are shown to be more active at such times. Supposedly, the sudden activity was observed in ancient times and believed the quakes to be the result of a giant catfish.

Like Greek or Norse mythology, ancient Japanese mythology have a bunch of weird ideas (perhaps no more weird than guys walking on water or snakes talking)... And through this mythology, there is a plethora of art on the subject.

Okay, I'll make this brief... "Jesus walked on water" is an example of figurative speech.
It doesn't mean that he literally "walked on water" it means that he achieved the impossible
through positive thinking and faith... As they say, "Faith moves mountains."


Briefly, there is a god named Kashima who holds down earthquakes with a huge stone named Kaname. When the god Kashima can hold down the catfish, there are no earthquakes, but the catfish is slippery and sometimes gets loose...


Here are a bunch of pictures of woodblock prints from the Japanese National Library depicting the relation of catfish to earthquakes. (If you want to see more, go to this link and click on the blue lettering to the left: http://dl.ndl.go.jp/info:ndljp/pid/1307504?tocOpened=1) 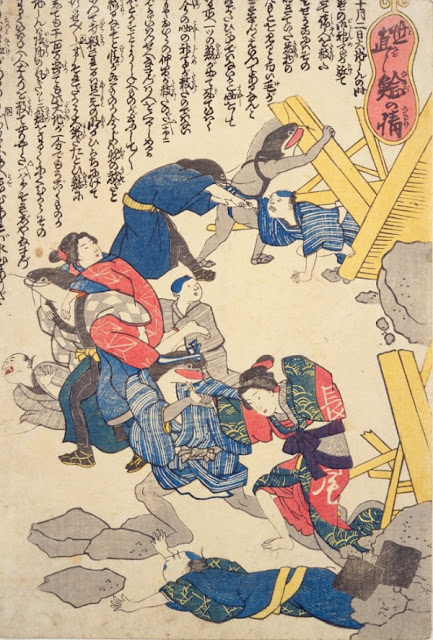 Catfish as saviors after an earthquake 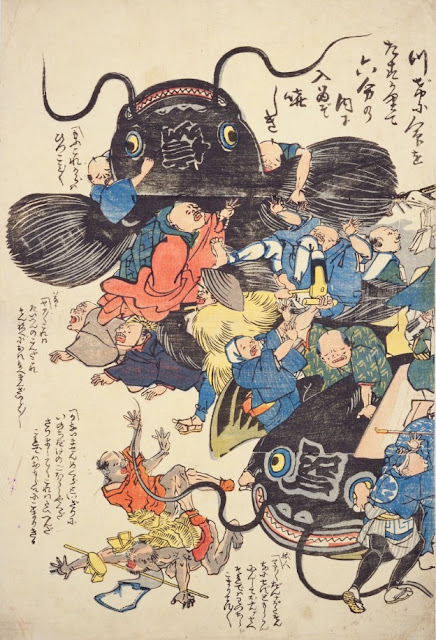 Catfish of Edo period and Shinzu 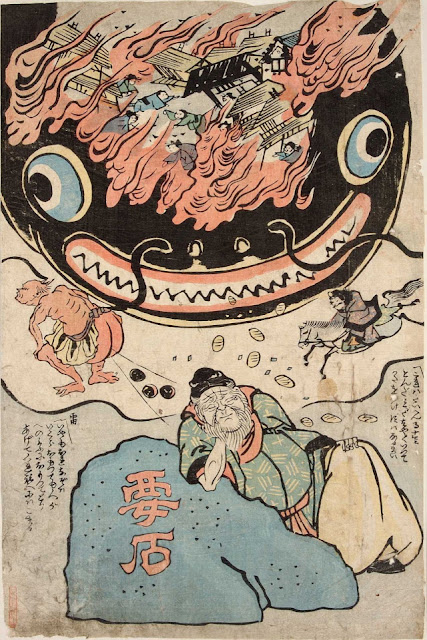 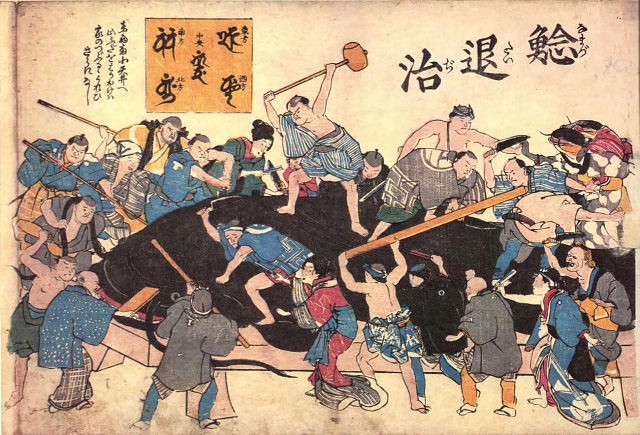 Attack on the catfish from the Edo period 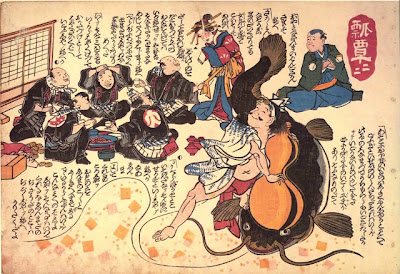 More partying with prostitutes and construction workers in Yoshiwara 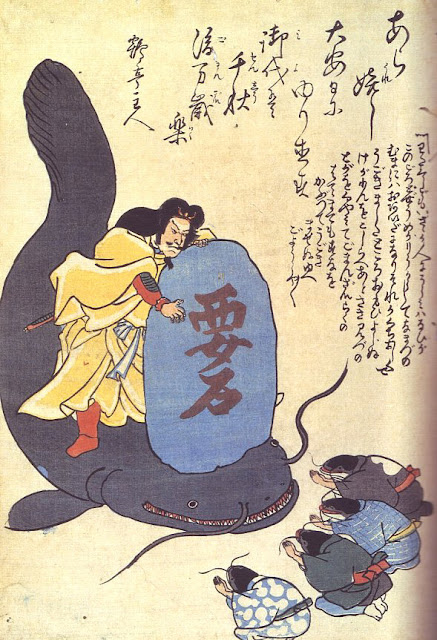 The god Kashima holds down the catfish with the Kaname rock 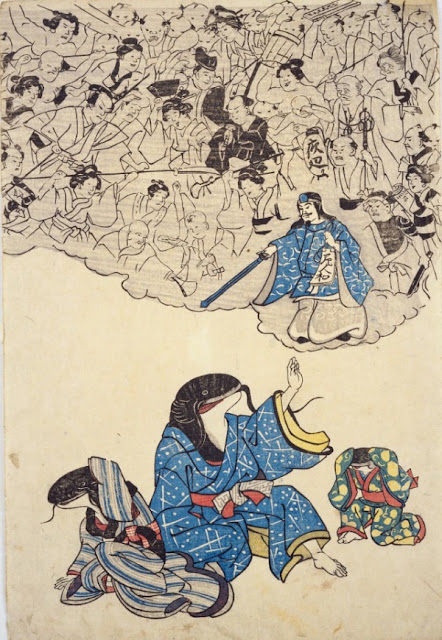 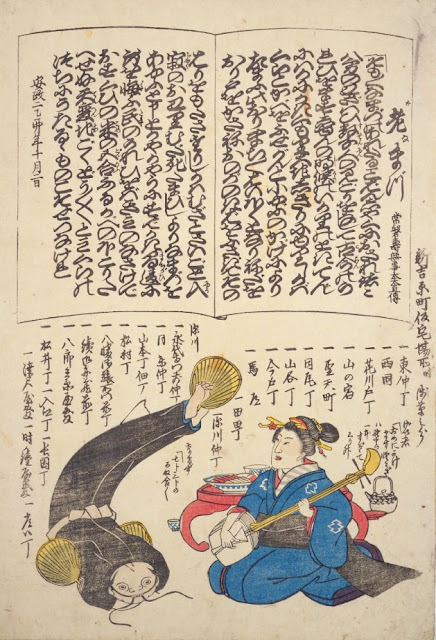 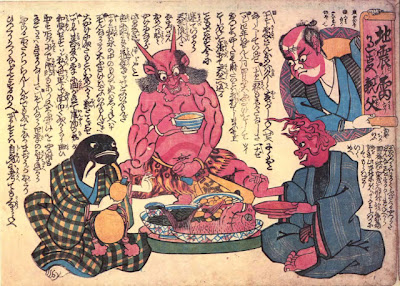 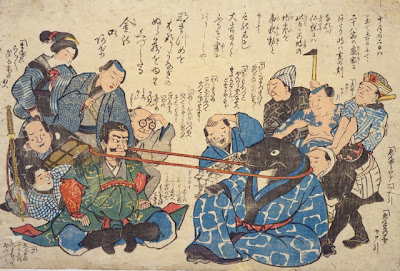 Kashima and a catfish in a tug or war 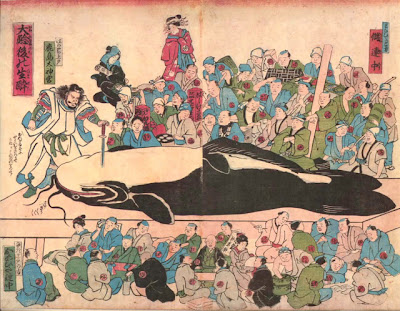 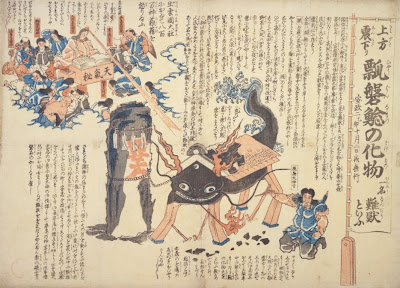 A great catfish is in the town (and causes an earthquake) 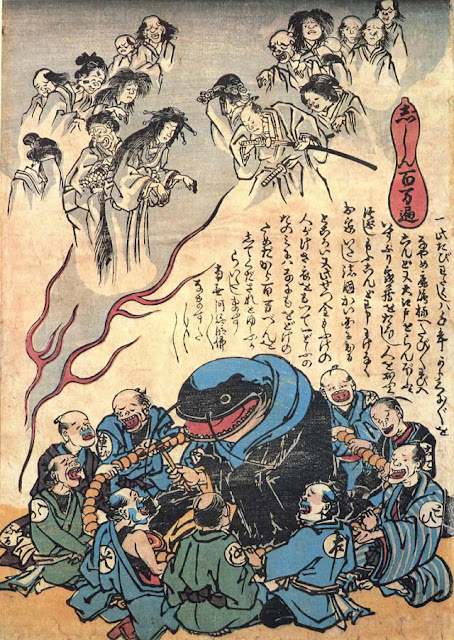 A million prayers for the dead 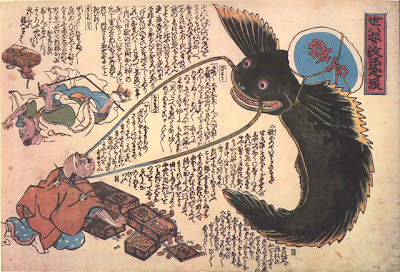 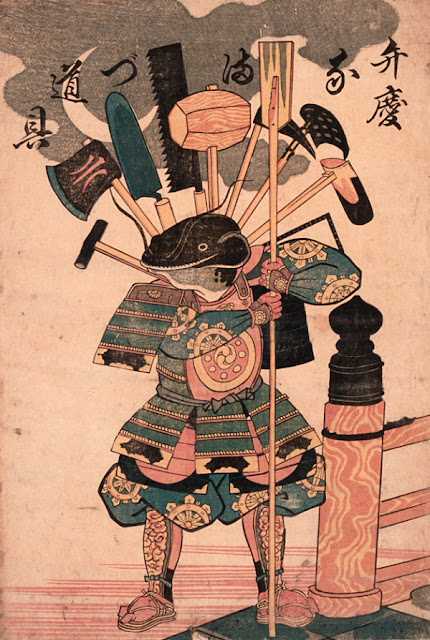 Catfish with construction materials and tools

There are a bunch more photos of artwork at Pink Tentacle with English explanations here: http://pinktentacle.com/2011/04/namazu-e-earthquake-catfish-prints/

You can also try to decipher the results of testing on catfish here written in English:
http://www.bousaihaku.com/cgi-bin/hp/index.cgi?ac1=R204&ac2=R20407&ac3=1262&Page=hpd_view


Why do I say, "try to decipher?" Well, here's the conclusion of the study for your purview:

See? I don't know if that's proof that catfish cause earthquakes or can detect them, but deciphering those sentences make my head hurt! Or, should I say,

Hey Mike - awesome ukiyo-e! A couple of days after the earthquake last year, I wrote about the catfish-earthquake thing. It was a fascinating fish tale - BUT, I really had no idea it was such a popular story - enough for all of those pieces of art!
When I was buying ukiyo-e, I came across these a couple of the pieces you show above and while intrigued, I thought they were far too weird for me, as I wanted classical Japanese looks for keepsakes. It's why all of my art is pretty much standard-looking. Boring even. These ones I know realize are fantastic and whimsical! Thank-you for showing us these magical pieces of art. I wish I had bought one. I also wish I could have found one with sumo on it - but they were always rare and very expensive when found. Too expensive even for a gaijin teacher with cash to burn.
Cheers!