They say that imitation is the greatest form of flattery so I hope the folks at Zerohedge will forgive me for, er, umm, flattering them so! Yeah. That's it! Flattering them! Over there they have a hilarious graphic showing the entire country of Greece on auction at E-Bay.


Absurd! Well, of course that would never work in Japan as no one in this country uses E-Bay. E-Bay came to Japan and failed like many other western countries did before them by not adapting their system to fit Japan and the Japanese mindset... But that's another story for another time.


In Japan, the online auction market is totally and completely dominated by Yahoo Auctions.


Over at E-Bay, the starting bid for Greece was $1500.00 (USD) but Japan is far and away a bigger, better and more prosperous country than Greece so the price is a bit heftier but well worth the starting bid of about $35,000 (USD). 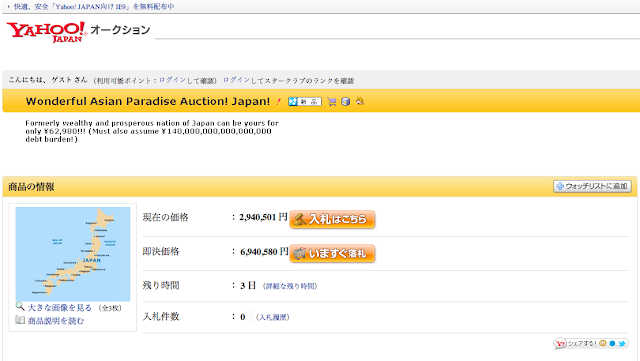 There is, though, one tiny-weeny catch though... Beware the fine print! The lucky purchaser also receives the wonderful responsibility of taking over Japan's public debt of ¥1 quadrillion yen.


I'm sure the auctioneer might be guilty of mis-stating the debt on the graphic so let me explain for you:


Will you be paying by cash, credit card or Paypal?