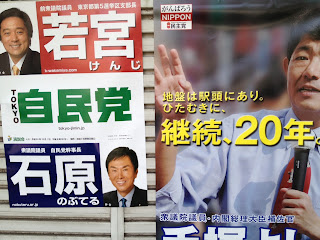 
Damn! It get's hot in summer in Japan!


But, let's face it folks, whatever the weather, all politicians are just plain dumber than a bag of donuts. Nevertheless, sometimes they do have good ideas (I'm sure it's someone else's idea that they've stolen). In Japan, the only good idea I've heard from politicians in the entire time I've been here is for guys to stop wearing hot suits in Japan's miserably hot and steamy summer and to wear cool clothes like Hawaiian shirts. Duh!


Maybe they should pass a law?

Confucius say: "Wise old man don't dress like idiot in hot summer"
I think most people don't need an imperial edict to know that
they should dress cooler when it's hot!


If you've been to Japan in summer (especially August) then you know how miserably hot and muggy it gets... I usually cancel my sports club membership in August because who needs to pay money for a sauna and massage when you can get one for free by just riding the morning rush hour subways? I usually get a go workout on the stair climbing and then doing a brisk workout inside the trains on the rings....


Oh, those hot and steamy rides and the other passengers giving you a full body rub down? Heavenly. And, you know by how well they massage your entire, back, thighs and legs that they are experienced too!


Well, the dimwits in Nagatachou (that's Japan's version of Washington DC - sort of) have announced that this year's campaign to dress down will start in May (you kind of have to wonder why these clowns need to even discuss this and make a press conference announcement about it. It's not like summer being hot in Japan should come as any surprise to anyone. But, then again, we are talking about politicians here.) News on Japan has the story in: Cool Biz to Start on May 1, Super Cool Biz to Start on June 1:

The government will launch its Cool Biz campaign again this year on May 1, the same as last year. Prior to 2011, the campaign began on June 1, but it was brought forward by a month last year in a bid to conserve electricity after worries that there would be a power shortage following the March 11 disaster.

The campaign will last until Oct 31, according to the Environment Ministry. During this time, employees are encouraged to ditch their suits and ties for open-necked, short-sleeved shirts.
Once again this year, the campaign goes one step further with Super Cool Biz, in which some fashion-minded people will don their aloha shirts. Super Cool Biz begins on June 1.


Here's a video of these clowns actually having a press conference to announce this nonsense! It is astounding how, with frightening regularity, that the hot summers in Japan can catch the government completely off-guard every time!

(THIS VIDEO IS BORING!)


A press conference? Photographers snapping photos like crazy? This makes the news? WTF???!!!!


Well there are many Japanese (especially younger ones) who think this is all just nonsense. I agree. Here's a guy teaching you how you, too, can be "Cool Biz" this summer!

(THIS VIDEO IS PRETTY FUNNY!)