How Do Japan's Radiation Safety Standards Stack UP Against USA or Europe?

There has been much fuss concerning the plans to incinerate debris from the March 11, 2011 Tohoku earthquake and tsunami disaster. In spite of this, to date, only about 6% of the total debris has been incinerated. There seems to be much fear about burning this debris as many people think the debris is radioactive.

No matter how hard I search, I cannot find any verification on that subject either way though I have requested to one of the major TV news stations here in Tokyo to see if they could find that information. I suspect that most of this debris has little, if any radioactive isotopes present. But even a little is too much for most people - though please understand that zero radioactivity is a physical impossibility. For more on that please refer to: Radiation and Reason - the Impact of Science on a Culture of Fear. That being said, it is completely understandable that people fear this plan to incinerate the debris in their neighborhoods far away from the disaster zone. Logically, as with smoking cigarettes (which do contain radiation when burned themselves), it can't do people any good to be inhaling any extra fumes from burning refuse if they don't have to... Extra radiation or not! 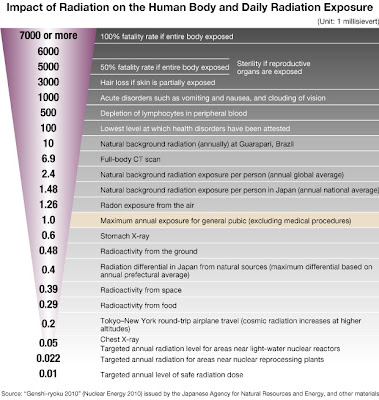 
This burning of the debris has sparked a major controversy in Japan. Many people are against the plan of disposal and the majority seem ambivalent... The only people for the plan seem to be politicians.


One guy asked about a comparison of the safety standards between Japan and the west when it comes to radioactivity. Well, folks, hate to break this to you if you are a foreigner, but Japan's safety standards are far and away much stricter than the west.


From Japan Communications Foundation, I found this information for you:

Japan’s Safety Standards Stricter than IAEA and EU Requirements*
Human beings in every corner of the globe are exposed to radiation from space, from the ground, and from the food they consume. Medical devices like CT scanners and X-ray machines use radiation to diagnose medical conditions. The International Commission on Radiological Protection has set 1 millisievert as the upper limit for annual radiological exposure, not including radiation from natural sources and medical devices.
Radiation is more dangerous if a person is exposed to a large dose all at once, which increases the risk of cancer and other diseases. Ill-effects start to appear after exposure to radiation levels of around 100 millisieverts; and exposure to 7,000 millisieverts or more is invariably fatal.
In Japan, the normal upper limit for radiation exposure for workers at nuclear power stations is 100 millisieverts, but this was raised to 250 millisieverts following the disaster at the Fukushima Daiichi Nuclear Power Station. Workers are issued with a radiation dose monitoring notebook in which to record their levels of exposure, the results of health checkups, and other information. Workers are not allowed to enter a radiation management zone such as the areas around a nuclear power station without this book.
There are two types of radiation exposure: external radiation exposure through contact on the body, and internal radiation exposure caused by ingestion of radioactive foods or liquids. Internal radiation exposure is of particular concern because until the radioactive substance disappears or is expelled, it will continue to expose the person to radiation.
In order to prevent internal radiation exposure, the Japanese government has stipulated provisional regulation values for radioactivity levels in food products. These ensure safety by preventing radioactive food and drinking water from entering the food chain. The regulations are extremely strict to ensure that radiation exposure will not approach the harmful level of 100 millisieverts even if the vegetables, milk, or other items in question are consumed every day for a year. Japan’s safety standards are even stricter than those set by the International Atomic Energy Agency or by EU countries in the wake of the Chernobyl disaster.
Shipments of spinach and other vegetables were halted when radiation levels exceeding these standards were detected on March 21. Most of the radiation was from radioactive iodine, which has a half life of just eight days. By the end of April, the ban on shipments had been lifted from all agricultural products from Ibaraki, Tochigi, Gunma, and Chiba Prefectures.

This may come as a surprise to most westerners that rules on the safe level of radiation in Japan are much stricter and far lower than the west, but it makes sense if you consider the history of this country and its government. The twin atomic bombings at the end of World War Two have had a great effect on the Japanese psyche and since Japan has a parliamentary government with many political parties, it is often a compromise with left-leaning or socialist parties that majority parties need to have to create a coalition government.

*From Japan Communications Foundation is a subsidiary of Jiji Press a news wire service established in 1945.

Nice to read something balanced. Kyushu is about as safe as it gets, but people here still rant. I was against it too, but then I realized that there must be debris all along the coast, most of it more or less radiation free. Part of the problem, though, is that the government tells such big lies. For all we know, they are sending scraps from the Fukushima plant itself to be burned.

If the Japanese government wants to put people at ease, they might try telling the truth for a change. The constant cover-ups just stir up conspiracy theories and hysteria (and I think the excuse they would give for lying is that they do it to prevent just that).

There are places now who suffer much due to neglect in Radiation Safety. The government and even us should be responsible enough to avoid the negative effects of these wastes. This is a very nice post.