Be Afraid! Massive Earthquake Coming to a Neighborhood Near You! - TV Transmissions to Continue!

A couple of stories in the news that made me chuckle this morning about how the news will do whatever, whenever it can, to sell fear. We, the doofus public, must always remember that fear and sensationalism sell the news. My friend Aaron Egon Moser reminds me that in the 1990s crime went down 43% but news coverage of crime went up 400%. I believe those statistics are from the book Freakonomics.

Of course, though, this isn't to say that normalcy bias isn't something you shouldn't educate yourself about, it certainly is. Being prepared for emergencies isn't being a nutcase, it's just being smart. Another reader, Clark, writes, "...did you know that the Crash of 1929 didn’t even make the front page of the New York Times? It took about three years for the full impact of that even and the corollary effects to work its way through the economic system. The Shit didn’t just hit all at once, it was a process, much in the same way it is happening today, little by little, bit by bit the massive economic distortions are continuing to work out through the system."

So, like I said, having at least the minimum amount of food, water and supplies stored up isn't panic stricken, it is common sense.


Now, let's move onto the news stories that gave me a laugh this morning. First off is the report that a major earthquake in Tokyo would kill over 9,000. MSN reports:

More than 9,600 people would die with nearly 150,000 injured if a mega-quake struck Tokyo, a disaster that would also level large parts of the Japanese capital, a government projection said Wednesday.

The frightening simulation was released by the Tokyo metropolitan government as Japan slowly rebuilds its northeast coast, which was devastated by a magnitude 9.0 quake in March last year that unleashed a deadly tsunami.
The disaster killed some 19,000 people and triggered the worst nuclear accident in a generation.
Tokyo was largely spared from the damage, but if a smaller 7.3-magnitude quake struck the sprawling metropolis, it would leave about 9,600 dead and 147,000 people with injuries, including 21,900 seriously, the projection said.


Interesting timing of these announcements... Just as the government claims it wants to raise sales taxes to pay for debt and reconstruction of up north... I wonder if these projections are more reliable than the projections made by models for Global Warming and the complete disappearance of the Himalayan glacial ice by 2035... Or was that 2350 (just a typo!)? Seriously, though, I find this kind of news interesting because I wonder what the purpose of it is.

"Earthquake!? But dear, what about your bridge club meeting with the ladies?"

Andrew Joseph over at the thoroughly enjoyable "Japan: It's a Wonderful Rife" blog (one of my daily "must reads") writes:

"I agree with you that the media loves its doomsday scenarios to sell the news. Having worked as a newspaper reporter for the Toronto Star, I can tell you that even a well-respected paper like that does not print all the news that is fit to print. It prints all the news IT thinks you want to read about. We all know that in the entire world on any given day, there are more than the 200 news items printed in a newspaper of 50 items in a TV news broadcast that occur. Why do they choose what they choose? They need something to sell.

Japan is hot. Nukes are hot. Ask one idiot for an opinion and you have a news story. A good media will get more than one opinion... it's probably why good magazine articles are so good... they interview multiple sources that prove a point and multiple sources that could also provide a counter-point.

The worst part is that the reader/viewer/consumer is so ready to believe anything it hears."

In the story about 9,600 dying in a massive earthquake, there is nowhere that says, "Do the minimum to prepare by storing water and food and emergency supplies." It is merely a fluff piece to scare people...

Actually am also wondering why they think such a big disaster in Tokyo, if a similar one already happened in a much more lightly populated area of Japan, Tohoku, and killed 20,000, why do they think it would only kill 9,600 in Tokyo? You'd think it would kill many more.


If you realize this, then you might, as I have come to realize, stop buying lottery tickets...


Yet, I do understand that, perhaps after the March 11 earthquake of last year, the odds of dying in a natural disaster may have gone up a few thousandths of a percentage.


So, then, what does this all mean? Is this a math question? Let's see, 75% over 4 years divided by a bunch of stoner university students multiplied by 70% divided by 30 years done by a bunch of useless bureaucrats? The answer? The answer is elementary, my friend, there is a 97% chance of something big happening sooner or later.

It means absolutely nothing. It's all purely conjecture. If these people were good at predictions they'd all be rich and, far from predicting earthquakes, may I suggest that they'd be down at the horse races or sitting in front of the ticker at the stock market?

There is nothing in the least bit useful or redeeming in this news piece either.

But never fear! Regardless of how powerful the earthquake and how many times over you and your family will be smashed, crushed, stomped on and just plain killed to death, you'll still be able to view the entire event as it unfolds on your large screen TV, from the comfort of your living room, as Japan's TV station's transmitter building - Tokyo Skytree - will never succumb to even the greatest of earthquakes! Bloomberg's Businessweek reports in Japan's newest tower uses anti-quake technology:

The Skytree has a restaurant and two cafes on the observation decks, a vertigo-inducing glass floor that allows visitors to look straight down, and an emergency staircase with 2,523 steps.
The tower was constructed with extremely strong steel tubes surrounding a central concrete column that are structurally separate from each other in the tower's mid-section. In the event of an earthquake, the concrete core and steel frame are designed to offset each other to reduce the building's overall motion. 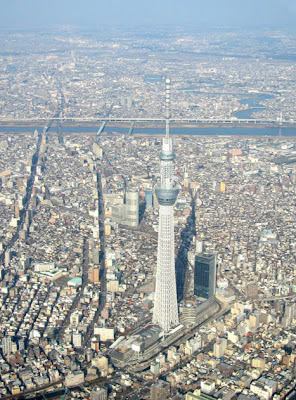 The Skytree has been built to stand firm even if a magnitude 7 quake were to strike beneath the building, said Sho Toyoshima, a spokesman for Tobu Tower. He said the tower sustained no structural damage from the magnitude 9.0 quake that struck off Japan's northeastern coast last March, even as it was being built.
The Skytree is expected to bolster television and radio transmissions in the capital region. Owners hope it will also become a new tourist destination in Tokyo.
I cracked up about this entire thing this morning as one of my favorite web sites for Japan news, News on Japan, had the story about the killer earthquake as it's lead story and the article about Tokyo Sky Tree second.

I thought that was comical. 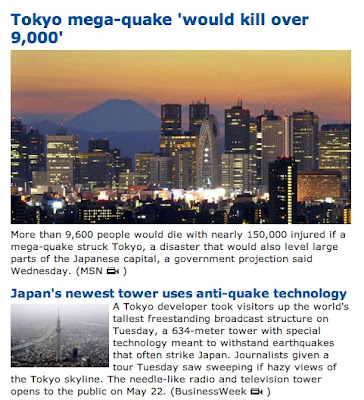 Doesn't this seem odd? Is someone over at News on Japan pulling our collective legs?

Anyway, folks, the point is that within the next two years or more, there is going to be a massive earthquake or not that is going to possibly happen and kill many people or maybe not.

As my dad used to say, "You just might not never know!" I guess we'll never know until we know so stay afraid... Stay very afraid...