If you or I took other people's money without their
permission and spent it, we'd go to jail...

Once again, the news is out about the Japanese government wonks giving away money that they don't have. This comes at a time when the government complains to the public at home that they have no money and a lack of funds thus a need to raise taxes to support the aging population and to reconstruct the earthquake and tsunami struck area of Tohoku.

Noda probably hot for this chick wants to impress her so, like
a typical idiot Japanese salaryman, he tips waaaaaaay too much!

Japan on Saturday pledged $7.4 billion in aid over three years to help five Mekong states, in an attempt at fostering development in a resource-rich region also being courted by China.
“The stability and prosperity of East Asia will not be possible without the stability and prosperity of the Mekong region,” Prime Minister Yoshihiko Noda told a press conference following a summit in Tokyo...
...Noda met leaders of the five Mekong region countries—Cambodia, Laos, Myanmar, Thailand and Vietnam—as Japan’s export-dependent economy seeks cheap labor and investment to power growth.
Folks, this is not an example of a government gone out of control, it's just government. This is another excellent example of why the government is not the answer to our problems but the main cause of them. Just a few weeks ago Prime Minister Yoshihiko Noda said containing Japan’s public debt load, the world's largest, is critical after Standard & Poor's downgraded credit ratings on the EU nations of France, Austria and seven others.... Then a few days later he just gives away over $7 billion?! WTF?


Maybe he was trying to impress the hot babe in the picture above! This politician must be certifiably insane... Politician? Insane? Oh, but I repeat myself. 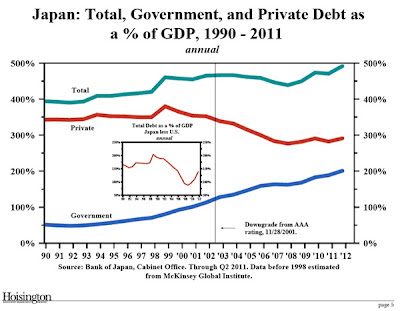 I've written repeatedly about this problem from the viewpoint of the burden on the local taxpayers. The Japanese government through their easy money policies and bailing out zombie banks over the years has put each and every man, woman and child in Japan ¥7,632,897 in debt (as of the writing of this article). If you want to read more on that (please make sure you're sitting down when you do), refer to: Here Comes Europe's and Japan's Debt Crisis - Just in Time for Summer. It will be much higher if sales taxes are raised.

Why in the world aren't the people in an uproar over this increase in debt?

Folks, we must get rid of these people in government. They are bankrupting us and our children. They are selling off the future of this nation. Noda must be removed from office by this July.

But do not think for a second that this is a problem related just to Japan. Of course it is related to all governments around the world.

There are two things that must be done:

1) Return to sound money policies and use of real money based on some sort of gold standard.

Point number 1 is happening right now as you read this. It is the slow motion train wreck that we so often read about. The powers that be are fighting  this return to real money and sound money policies because with a fiat currency and fractional reserve banking, they can spend money (and exploit the public) with funds that they don't have. They can create money out of thin air.

Japan went off the gold standard in 1931 and we saw what happened that year! Japan invaded China and that was the actual starting date of the Great Asian War. Western history books teach us that the great war started on Dec. 7, 1941...

2) Point number 2 must be remembered because it has an important lesson for everyone. People need to pay more attention to their government and leadership. This is not only centered on national political circles either. We have to keep an eye on what these politicians do in our name and demand that they work for the public and not the other way around.

This spending at the tax-payers expense (because the government has no money except what it takes as taxes) is unacceptable. This country can ill-afford it with the debt crisis, the nuclear crisis, reconstruction problems (still tens of thousands homeless in Tohoku), the aging population crisis, the trade deficit, Japan's major industries losing market share to Asian competitors... These problems and the government wants to take on more debt!?

I am calling for the Japanese people to remove the government of prime minister Yoshihiko Noda from office immediately.