Take a 6 Minute Time Trip to Japan of the 1950s! Three Songs From the Showa Era! 懐かしい曲！


For your listening pleasure, here are some songs from decades ago Japan.


First, two songs from 1955 Japan. Yes, they are Enka. Enka is to Japan what Country & Western music are to the United States.


When I first came to Japan in the late 1970s, a young Japanese guy told me that, "Enka is the heart and soul of Japan." I thought he was crazy then... But no. He was right. As I get older I can see that Enka is the heart and soul of this country... Rock or pop music will probably never take the place of Enka... The rock and pop musicians are nowhere near as talented or skilled as Enka musicians are... Just like in America, country musicians grow up playing their music with grandpa and dad - so by the time they are 17, they are already awesome musicians. Rock musicians? Not all of them but many start playing when they are 16... Big difference.


That's, of course, just the opinion of an old guy working in the pop and rock music industry in Japan (who has to listen to crappy pop and rock music all the time with singers who can't carry a tune - especially young Japanese ones!).... But that's off the point...


The first song today is the debut song of Chiyoko Shimakura from 1955 entitled, "Kono Yo no Hana" (Flowers of this World) and, the second song (starting at 3:19) is Tsuzuko Sugawara and "Tsuki ga Totemo Aoi Kara" (Because the Moon is Very Blue) also from 1955. (I like the old radio used in the video as I used to collect them and do own one of my own that actually works! Photo at bottom!)


The next song is from 1946 and was a huge hit just after the war by Namiki Michiko entitled "Ringo no Uta" (Apple song). At 1:00 into the video is most probably Japan's most famous singer in history, Misora Hibari and "Tokyo Kid" which was a massive hit in 1950. The third song that comes in on the video is Tsuzuko Sugawara and "Tsuki ga Totemo Aoi Kara" for your listening pleasure (again!)

Michiko Namiki was definitely a cutie!

Hibari Misora is arguably Japan's greatest singer - so famous that there's
actually a pachinko machine named after her!

This video features lots of old photos from just after the war. 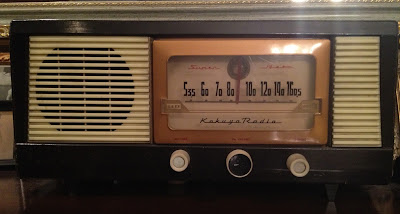 Isn't she a beauty? Still works great too! Thanks to my friend Akio Tahara for selling it to me for only ¥10,000!!! I shall always cherish it! 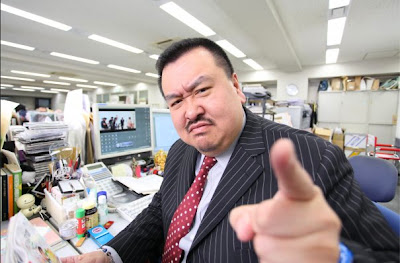 Sorry Mike, I have never been a fan of enka - but that may be because I never understood the words! I find, however, as I get older, I like country and western music... but I still prefer it with a rockyness. Maybe because I understand the pain involved in C&W. Enka... I have a CD of it that I bought... it still sounds like caterwauling to me. The voices are so high, and I think that is what I dislike about it. Musically, I have no probnlem... it's the vocals. Lyrically, again, I have no idea... but the again, I'm an gaijin ignorant of many things. Can you provide us with a lyric sheet in English of any one of the songs you posted? It would help us all learn...
Still... it was a good blog - and that radio is awesome - but not as awesome as that last photo of the big guy pointing his finger at you like you were a child.
Love it!
Cheers