In yesterday's article Japan's Collapse Will Be Absolute and it Cannot be Stopped - Here's Some BIG Reasons Why I wrote that Japan is now entering the so-called Perfect Storm that is going to ruin this country and there's no way out. 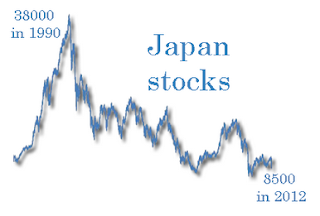 Our debt situation is past fixable state. The March 11 disaster of Tohoku has put the entire country in a situation whereby we are set to turn off all our nuclear power plants in the summer of 2012 (good timing while oil prices have passed $100 a barrel and the saber rattling gets louder near Iran)... The Japanese public, in their usual confused state, as well as the decrepit Japanese political class are even entertaining the idea of shutting the power plants off permanently. This entire mess has lead to a situation whereby Japanese electrical power companies have stated that they want to raise the power costs to manufacturers. Zerohedge writes in: A New Beginning in Japan: Glimmers of False Hope:

TEPCO, the bailed out owner of the Fukushima nuclear power plant, is trying to shove rate increases of 17% down the throats of its commercial customers—while rationing power at the same time.

Continuing in another quote from yesterday's article: Japan Inc. is losing money left and right as it it without a massive increase in costs. Please refer to Times of India Sony, Panasonic forecast deeper losses:

Japan's biggest makers of phones, televisions and chips say they'll lose about $17 billion this year, about three-quarters of what Samsung Electronics Co will spend on research to lengthen the lead over its competitors.
Sony Corp more than doubled its annual loss forecast for the year ending March 31 as it announced a new chief executive officer, while Panasonic Corp and Sharp Corp predicted the worst losses in their histories. Their combined losses compare with the $22 billion that Samsung, Asia's largest consumer- electronics company, said it will invest in capital expenditures.

These two Japanese giants are going to lose in one year nearly what one Korean competitor will spend merely on R&D? Folks, it doesn't take a genius to figure out what's going to happen to these entities when they are hit with a 17% increase in operating costs. At least three big things will happen. One, the manufacturers will pass on increased costs to you, the consumer, which will ultimately decrease sales for them and increase the cost of living for you. Two, this increase in cost of living will decrease sales and hurt production and profitability further (thereby actually depressing tax revenues for the government in spite of raising taxes). And three, they will move factories overseas where it is cheaper to operate.


This energy problem and the problems Japan faces lay plainly at the feet of the government... Namely government interference with all areas of the economy and public life... An interference that expands daily. If the government didn't get their hands in ruining the economy, Japan could have shaken out all this bad debt we had in the late 80s at the end of the so-called bubble and started building a solid economy... But we didn't. The Japanese government bailed out the banking industry and gave rise to the word, "Zombie Banks." We still have them.


A the economic problems grow inexorably larger as the population ages and the energy problems peak.


Diego.a a regular reader to this blog sends in some very interesting observations on this situation. They basically boil down to, "How in the world could it be that Japan has fallen so far, so fast in just these thirty years?" Of course, I'd have to answer, "...Just look at government interference. The more the government gets involved, the more messed up things get."

Remember the 1980s/1990s when people were Americans were scared of Japanese companies buying up the world?

Losing the War with Japan:


(The description on the video of "Losing the War With Japan" reads as follows:
PBS documentary, which first aired in 1991, titled Losing the War with Japan. It examines Japan's economic challenged to the US, which reached its peak in the late 1980s to early 1990s. A key argument in the documentary centers on the manner in which Japan achieved its economic rise, which was through state-led industrial development based on "predatory capitalism" and America's need to respond in kind. )


Now, thanks to the state, you have blackouts in 21st Century Japan.

Things are so bad, China may end up with the first practical thorium reactor . That is nuts!

Oh what a difference a few decades make. Seriously, when you consider Diego.a's words, it is appalling that the Japan of the 21st Century has been so ineptly mismanaged that blackouts are going to become a part and parcel of life in this country.


If big government were the answer to our problems then the Soviet Union would have been a very successful country. But it wasn't.


We are now witnessing the results of two lost decades, going on three, of government interference in the Japanese economy. It's pretty easy to see how well they've done.

MMJ: "And three, they will move factories overseas where it is cheaper to operate."

Wouldn't that be a boost to earnings?

Especially if they laid off the high wage earners with huge pensions and replaced them with lower cost employees?
Say goodbye to lifetime employment, er is that, welcome to fiat money printing unemployment benefits? That broken window is a huge boost to an economy, just like in the unitedstate.
Psft.

Maybe that's what Marc Faber sees as a reason for thinking the Japanese market may outperform all the other markets?

For those that don't relocate, they will pass their parts price increases on to their industrial and municipal customers and those customers will suffer even larger hits on earnings as a result?

I don't know.
This race to the bottom is spooky.

You do seem to be making quite a bit more sense than he is at this point.

Massive boost to earnings and much employment for people living in other countries!