Facebook is a Failure as a Marketing and Sales Tool - Here's Data!

Marc Sheffner posts an incredibly interesting article at the Searching For Accurate Maps blog about how Facebook is actually a losing proposition when it comes to marketing and promotion. 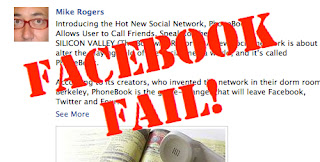 Actually, I suspected so. I'm glad Marc put up some real numbers for people to get into.


Ad Age, a six-week study of Facebook’s Fan pages showed a mere 0.45% of fans engaged in any way beyond clicking “Like.” This indicates that Facebook fan bases and actual engagement aren’t the same thing.
The average engagement for the 10 brands with the largest fan bases (like Harley Davidson, Nike and Porsche) was 0.36%. The highest engagement was in the alcohol category and the lowest in laundry detergent, social platforms and apps.
In other Facebook marketing news, my colleague Brian Croner reports that “world famous Sun Valley Ski Resort here in Idaho, invested their entire $950,000 ad budget in Facebook advertising in 2011 and it bombed. It bombed so bad in fact, they fired their marketing director. Last year they had more snow than they knew what to do with and still couldn’t pack the hotels after using FB exclusively.


Looking at how badly Groupon is dropping, refer to Groupon Shares Fall Off a Cliff, Down 42% Since IPO, Facebook had better IPO as soon as possible because I suspect that the actual value of these social networks could be close to zero. I already know that Facebook is losing money.


Don't forget that, just a few years ago, Myspace was the King of Social Networks... Today? They closed their office in Japan last month.

The silly social campaigns may suck, but FB ads have performed.

I've personally managed FB ads with tracking in place and attained 200+% ROI on them. I've also killed campaigns pulling in less than 5% after a week of trial.

Bad marketers will perform poorly regardless the medium. It'd be my guess that the Idaho marketer was some magazine or newspaper guy basing all decisions on gut instinct instead of hard analysis.