Kenny Rogers and Me In Las Vegas Together - A True Story!

Do you like your last name? I do. I like the name Rogers. Having a name like Rogers hasn't really ever been a problem for me excepting three interesting times in my life. Let me tell you about them...


The first time was in the USA when I was selling financial instruments right after I graduated from college, a client who wanted to buy some mutual funds from me told me that she couldn't buy them because her fiance was dead-set against it. The reason? My last name was "Rogers." She told me that her fiance had a step-father whose last name was Rogers and he hated him. So he didn't want her to buy the funds from anyone named Rogers.


Seriously. Sounds like a nutcase (him, not her). She thought he was being completely unreasonable too. Yes, dear, there are a lot of crazy people running around.


Another time my full name became an item of interest was when I first came to Japan and went on an audition for a radio program at the big nationally-broadcast FM Tokyo network. In the west, names like Mike, John, Tom, Dick Manny, Moe and Jack are pretty common names. In Japan, they are not. In Japan people have names like Taro, Jiro, Shigeru, Kenichi...


In Japan, "Mike" means "microphone." And my last name, "Rogers" sounds like the name of a very famous discount department store here called , "Rogers Discount" (kind of like K-Mart). So when the producer heard my name was Mike Rogers, he said, "Is that a stage name?"


I jokingly answered, "Sure. 'Mike' like 'microphone' and 'Rogers' like 'discount.' I am the only discount Deejay in Japan. I work for very cheap."


I still use that joke. It still flies well in Japan.


The third time my name came in handy was in Las Vegas. Really.


My wife and I were staying and gambling at one of the huge casinos just at the very same time that Kenny Rogers was performing there. Of course, when we made our reservations, we didn't know - or care - who was in town performing. It just happened that Kenny was booked for Viva Las Vegas the same time as me (great minds think alike!).


One day, at the casino, while I was sitting at a Black Jack table getting thrashed, all of a sudden, the casino lights started flashing and the back ground music changed, and they started playing that very famous Kenny Rogers song, "The Gambler." There was a huge commotion just to the table to my left and all these cameras came out and a throng of people. Five or six old ladies sat down at the table next to mine.


I asked the dealer at my table, "What's going on?" and he told me that a local radio station had a promotion and the winners got to play Black Jack with Kenny Rogers. 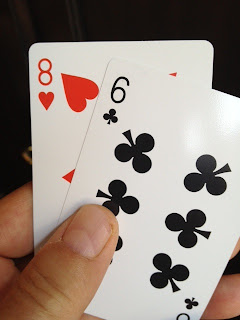 "Dammit! That's six times in a row, I've been dealt a fourteen!"


Just as those words were leaving his lips, the flash bulbs were crackling and Kenny Rogers walked out to the table and stood as the dealer. veryone was staring. Me too! Of course, I was "toasty" from drinking gin and I yelled out, "Kenny! Hey dude! It's me, Mike! Mike Rogers! Remember me, we're cousins?" Of course he heard me, he wasn't standing 10 feet away from me. Kenny looked at me then began to scowl when he realized that he didn't recognize me at all.


Hell. From then on he ignored me and wouldn't look my way. We're both named Rogers, right? I thought we had a relationship! You know, all that 'blood is thicker than water' stuff!


Well, having enough of that cold shoulder treatment, and being completely ignored by everyone, I called the pit boss over and told her that my wife and I would like to have dinner at the steak house just at the opposite end of the casino and asked her to make immediate reservations. She did. Since I had been staying at that hotel for several days, she recognized me and knew I wasn't lying when I said my name  was "Rogers." So my wife and I cashed what little chips we had and headed over to the restaurant.


When we got there, there was a huge scene. There were security people everywhere. I thought that we must have just missed some big fight or commotion... Maybe even a robbery! The security people (at least ten of them) had the entrance area taped off and they told us to wait outside the restaurant for a few minutes. After a while, they finally allowed us to pass. I walked up to the reception counter at the steak house (this was an expensive and high class joint) and said I have a reservation.


The woman said, "And your name, please?"


"Rogers," I replied. Her eyes grew wide. She stopped and stared speechless at me for a moment... Finally, she gulped and stuttered,


I apologized to my wife for the entire hassle. Actually, she wanted to keep gambling but I told her that since Kenny Rogers was at the next table that it was such a zoo of people in there that I though it best to eat now and then go back once he's gone. She didn't really care about Kenny Rogers as she is a fan of Classical music and Hip Hop (go figure) so she doesn't even really know who Kenny Rogers is!


A second later, the restaurant manager came out to the front and said to me, "May I help you sir?"


A bit confused I repeated, "Hi. I have a reservation for two for Rogers!"


She scowled too and said, "Did the pit boss at the casino just call in this reservation?"


"Yes, she did." I said (feeling like Michael Palin), "And a fine job she's doing too!" The manager whispered something to one of the security guys and he groaned and all of the guards dejectedly walked away.


The manager seemed annoyed but she grabbed two menus and took us into the restaurant. We had been to that very same restaurant before a few times, but this time, we were taken into a special area of the restaurant. It was a back-room area that seems like it is reserved for VIPs like Don Corleone. What opulence!


We sat down at the table and I picked up a spoon and looked at it closely. I said to my wife, "Hey! Look. This is real silver!"


She stared at me and said, "Don't put that in your pocket."


"People were acting very weird at this place," I thought. Then I realized what happened; they had originally thought that Kenny Rogers was coming to eat! Probably the pit boss told them that the dinner was complimentary (hell, it should be, I lost $5,000!)... Then, when they saw that I wasn't Kenny Rogers, they probably thought I was Kenny's relative so they'd better treat me right.


Those poor folks.... They were expecting a big famous star to come into their premises and spend time at dinner. Perhaps even the restaurant manager or waitress would meet Kenny and they'd hit it off and, who knows, wedding bells would ring? At least, though, one would expect that Kenny would eat a huge meal and leave a huge tip....


But no. It was not to be. We ate like Japanese and tipped like Chinese. The restaurant people and security guys didn't get Kenny Rogers, arguably the most famous country music crooner in history... They didn't get the chance to meet the guy who has sold million of records and been on innumerable TV shows and even in movies. They didn't get Kenny Rogers, the guy who was once one of the highest paid performers in history... They only got his relative. Me, Mike Rogers, a discount Deejay from Japan...

With a webcam software, you do not have to worry about losing what your camera has recorded if there has been a theft or vandalism. Since most of these services like GotoCamera store images and recordings on an external server, you can always go back and retrieve them to catch the culprit.