"Giant Mutant Bed Bugs!?" Ewww! I was shocked as I read the headlines... I think one of the most absolutely disgusting things in the world are Bed Bugs. Huge ones!? That's just sickening and makes my skin crawl...

"Tokyo: Giant Radioactive Mutant Bed Bugs Spawned From Fukushima Disaster! Bed-Bugs Discovered the Size of Rats!" Scary... And misleading... This sort of headline is fitting for Japanese 1950s Science Fiction movies ala Mothra versus Godzilla or a Gigantor cartoon. And why not? The Fukushima disaster is a real disaster and it's certainly capturing the imaginations of people all around the world including advertising agencies, survival goods suppliers, political organizations and, of course, said science fiction writers.


Some of those science fiction writers - whether for publications, mass media or retailers - are doing all they can in cashing in on Fukushima... They are cashing in on it to sell their sensationalist scribblings, video reports or just plain to peddle goods.


This post has it all! It is about misleading headlines, bait and switch and disgusting Bed Bugs.


This morning, over my coffee, I found one advertiser that has really gone too far. There is an ad on Yahoo that, in my book, insinuates something sinister going on related to Fukushima but it is nothing of the sort. Take a lookie at this ad: 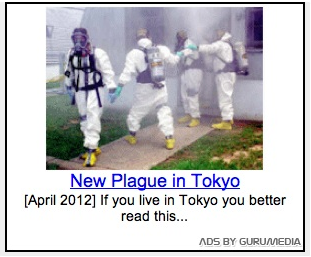 This is the ad. Now, you tell me, with all the news about Fukushima, what does this image and the text suggest to you?


Some advertisers will stoop to any level in order cash in on other peoples misery and troubles and use scare tactics to sell product... Unfortunately, most people are too brain dead from too much TV that they fail to see it for what it is.


This advertiser has really gone too far. I've said many times that things are bad enough at Fukushima for those poor folks but recently, the shrill voices of terror, gloom and doom have really gotten out of control with their reporting of "worse case scenarios" as being signed, sealed and delivered finished deals. I wrote about that in Sensationalism, Scare-Mongering and the Nanny State.


The sensationalism really has dropped to tabloid level. Just like something you'd see at the check out like at your local super market, this madness has stooped to new lows. Here's a new bait and switch that gets folks in Tokyo and the world over who are panicking about Fukushima to click their banner because it looks like it portends to news about radiation...


On the top page of Yahoo Finance, the bait and switch ad appears on the right. It says, "New Plague in Tokyo. If you live in Tokyo, you'd better read this..." 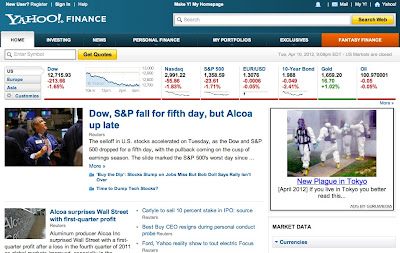 In fact, these guys are really going for it, I see where their ad is a revoling ad along with a credit card company and also appears with a different image as this, "New Bug in Tokyo. If you live in Tokyo, you'd better read this..." 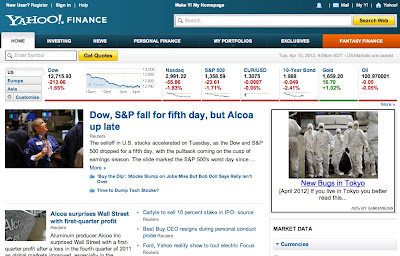 The ads are by a probable fly-by-night company named Guru Media. This poor excuse for an advertising agency claims:


Guru Media International was founded by a team of marketing and advertising professional who understand that today’s world requires a customized suite of solutions to help companies succeed. (sic)


Bwa! Ha! Ha! Terrible! "...founded by a team of marketing and advertising professional"!? Really? Guys, there's supposed to be an "s" at the end of professional, as in "professionals."


Wow! A lead in suggesting Fukushima radiation problems in Tokyo that take me to an ad for Bed Bug remedies in Minnesota? There really must be a sucker born every minute! (Pun intended!)


Anyway, back to the misleading banner ad. I live in Tokyo and when I saw it this morning, I clicked it. I clicked it because I thought, "What kind of nonsense is this now? Another company selling fear and survival gear?" But no! It's worse than that! I clicked the link and found... A full page ad selling products to fight Bed Bug infestations in the United States!


This ad has zero to do with Japan! It is an ad for products to fight the Bed Bug infestation that is spreading across the United States today. There's not one single mention of anything that has to do with Japan excepting the byline at the start that claims this "news" is from Tokyo (probably an algorythm that helps the advertisers decide where the results are best). When you click the banner, it takes you to this paid advertisement. Here's the ad at the top of the page:

Tokyo: Remember when "sleep tight and don't let the bed bugs bite" was just a cute bedtime expression that didn't mean anything? Well, those days are over. After 6 decades of living largely bed bug-free, the US is facing a national infestation.
In fact, the incidence of bed bug infestation has risen 500% in the last few years alone, and they're not just in dirty hotels - they're at the 5-star ones as well and swarming the public places you visit every day. Bed bugs are shutting down businesses and being found at your local movie theaters and clothing stores as they inch closer and closer to your home..


Nothing to dow with Japan at all... Now, that's some mighty fine bait and switch there! I'll bet they catch some pretty good sized fish with that too! Maybe this works for people nowadays. Maybe people are so drugged out or have such a problem with ADD or short attention spans that they've become like pigeons. You know, 1.5 seconds later they can't remember what they were doing.


What's the point of my rant? Well, I think it's pretty obvious that sensationalism sells. It sells newspapers and advertisers for TV and radio... Heck, selling by using fear and sensationalism isn't even hidden anymore. It is blatant and they have no reservations about using dishonest methods to make a buck.


You'd have hoped that, after all the lies of the mass media concerning Saddam Hussein, SARS, Swine Flu, Bird Flu, Global Warming, ad nauseum, that people advertising on the internet would be a bit more sophisticated along with the audience...


Now, I often complain in this blog and sometimes people take me to task for only complaining and not offering solutions. I stand guilty as charged! But not today! Today, I am going to put my money where my mouth is. Today I am going to show you just how a company can be honest and still do a great business. We don't need misleading sensationalism to sell a product where a need actually exists... Where a need does not exist, sensationalism is a good way to take advantage of suckers.


So, without further ado, may I show you folks a good way on how to sell product against Bed Bugs? First off, find a person with a need (Read: someone with Bed Bugs). Secondly, have them watch the following video. This is a 6 minute long Emmy Award winning documentary called,


Ewwwww!!!!! This gives me the chills every time I see it. Is that creepy, or what? Can there be anything more horrible than something that bites you will you're sleeping? The vampire Bed Bugs!... That there's an infestation of these creepies all over America just gives me one more good reason why I'm staying here in Japan all safe and snug as a bug in a rug in Tokyo...

For those still stuck in the American Empire:

LewRockwell.com posted a link on a low-cost, human-safe way to kill many pests, including bed bugs, using Diatomaceous Earth (Food Grade). Reviews for it are also posted at Amazon.com.