This article is not about Japan, but I think it points to what is going to happen here very shortly concerning major television stations .

I have written extensively about how the digital conversion in Japan on July 24, 2011 is going to destroy TV Tokyo, TBS, and then TV Asahi. In that order. This is because these stations are last in ratings and losing money now. When the digital conversion happens, they will lose another 30% of their audience.

They aren't making ends meet today. It is inconceivable that they will do better when their audience shrinks by 30% overnight. I wrote about that here and here.

In an article that came across my desk today, I see that Cable TV stations in the USA lost over 500,000 subscribers in the 3rd quarter of 2010. They, too, cannot survive this kind of bleeding of audience.

Cable companies have traditionally increased the cost of their TV services each year, often with no improvement in the offerings. As people start looking to save money, many are leaving cable providers. Gigaom reports that it has cobbled together the number of cable subscribers lost for four of the top five cable companies around the country for Q3 2010 and the number of folks leaving cable is growing.
However, Gigaom reports that over the last few quarters the number of subscribers lost from cable and gained at satellite and IPTV firms is not matching up. Many people are just walking away from paying for TV. This is getting easier to do with most major networks offering their programs online free and services like Hulu offering old shows for fans to watch.
What is written here is true but I think the writer is missing out on something else that is going on. There are now services popping up all over the world that offer satellite TV for a one time fee. Here's one called Satellite Direct. 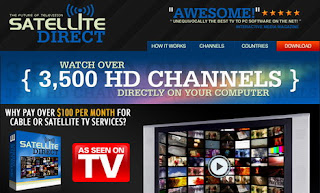 How does that song go? "3,500 channels and nothing on..."
Satellite Direct sells their service for a one-time fee of $49.95 (Ask for a discount and they'll sell it to you for $24).... These sorts of services offer you a download to your computer and give you thousands of channels. Of course, I am not selling this to you. I think TV is brain damage and a complete waste of time, so I don't recommend it. My point here is to illustrate how these pay TV services have a business model that is now broken.

The moral of the story is that this is what is going on now and this also shows why these huge TV stations like TV Tokyo with over 1,000 employees (and the overhead that goes with that) are dead.... How in the world will they compete with a music only - or a fashion channel, sports channel, etc, TV stations that only have 20 ~ 40 employees?

They won't. They are dead.

When cable TV first came out in the US, there were no commercials and everyone subscribed, paid for the service, and were happy for not having to put up with the commercials. Now that commercials are common on cable, there's nothing to differentiate cable from regular TV. If you're paying for an experience different from regular TV, you'll leave once you've realized that there's no difference.

What's worse is that movie theaters in Japan are now showing commercials to the audience before screening the trailers and feature presentation. With the average ticket costing around$20, it's amazing that the public is still willing to pay to watch.

Actually I bought satellite TV. It is a just a software through which you have direct access to every streaming TV around the globe. It is very convenient but still I feel I wasted money on it since every streaming TV is accessible free on internet if you know the URL. Also streaming version of major TV station is nothing compare to regular program. Sometime you can not access for longtime. Still this trend as you mentioned is accelerated every day and seems no one can stop and reverse. I hope I can access every TV program around the glove with HD quality in near future. :)