Hell, I'd love it if my daughter was making $3 million dollars a year! 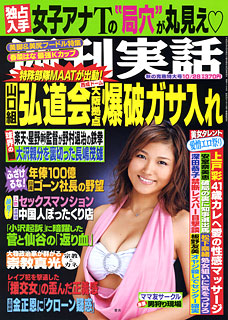 Hanakiren
The actress had an apartment arranged by the production company and appeared to be living quite an extravagant existence — a far cry from her days of hanging out in the entertainment districts of Chiba City and Funabashi after finishing middle school in April of last year, continues the weekly.
“But once she started gaining popularity, speculation about her age began,” explains a local beat writer. “Then, all of a sudden, she disappeared without a trace. Not long thereafter her friend called a child pornography hot line, and that’s what lead to the arrests.”
Reading the above one can deduce that there are many girls of this girl's age who are applying their trade all over Japan. This is true. In this particular case, this girl got famous and then the police decided to take notice. It can also be deduced, from this article, that this girl was "working" in Chiba's pink section way before she ever got a chance to be in a video. Why don't the police do something about that?


Only a fool would think that there are no 15 or 16 year olds hanging out and giving services at these "Pink Sections" all around Japan..


Oh, I forgot... They are too busy keeping Japan safe by giving out traffic tickets.
I don't want to make too many comments about this, but, in a country where it is legal for 16-year-olds to get married, I wonder why it is illegal for them to appear in porno movies?
It's just more hypocritical nonsense and a waste of taxpayers money that the police are out "screwing around" with this nonsense. I'm sure that this girl's morals weren't destroyed because of a contract... Her problems (if you want to be judgmental and call them that) began at home not at an adult video company.
This is nonsense.
at November 07, 2010

Remember that fat ass, Takafumi Horie, who (through collusion with Lehman Brothers) single handedly destroyed Livedoor (while making tons of money for Lehman) through securities fraud?

Well, he's now the owner of an AV production company. Maybe, you're writing about him...