In keeping with the idea that this blog should be a spark for contemplation and ideas I'd like to remind you of - or introduce you to - the Ultimate Soldier.


His name is Hiroo Onoda. Hiroo Onoda was the Japanese soldier who continued to fight in the mountains of the Philippines for thirty years after the World War II had ended.

Hiroo Onoda was a trained Japanese intelligence officer who attended the Nakano School. On December 26, 1944, he was sent to Lubang Island in the Philippines, and was ordered to do all that he could to hamper enemy attacks on the island, including destroying the airstrip and the pier at the harbor if necessary. He was ordered to not surrender or take his own life. However, on February 28, 1945, U.S. and Philippine military forces captured the island. Within a short time of the landing, all but Onoda and three other soldiers had either died or surrendered. Hiroo Onoda ordered the men to take to the hills, while he continued his military campaign. In October of 1945 the Japanese men saw their first leaflet which claimed that the war was over. The paper read “The war ended on August 15. Come down from the mountains.” However, the soldiers mistrusted the announcement and concluded that the leaflet was Allied propaganda.
Towards the end of 1945 leaflets were dropped by air with a surrender order printed on them from General Tomoyuki Yamashita of the Fourteenth Area Army. Onoda once again dismissed the letters. In 1952, family pictures were dropped from an aircraft urging the men to surrender, but the three soldiers concluded that this was a hoax. The men continued their guerilla warfare for decades after the war. In 1972, one of the Japanese soldiers was shot and killed when he was caught burning rice that had been collected by farmers. At that time, Onoda was left alone in the mountains. However, in February of 1974 he met a Japanese college dropout, Norio Suzuki, who was traveling the world. The men became friends, but Onoda still refused to surrender, saying that he was waiting for orders from a superior officer. Suzuki returned to Japan with photographs of himself and Onoda as proof of their encounter, and the Japanese government located Onoda’s commanding officer, Major Taniguchi, who had since become a bookseller. He flew to Lubang and on March 9, 1974 informed Onoda of the defeat of Japan in WWII and ordered him to lay down his arms.
Lieutenant Onoda emerged from the jungle 29 years after the end of World War II, and accepted the commanding officer’s order of surrender. He was still wearing his uniform and had his sword. He also still had his Arisaka Type 99 rifle in operating condition, 500 rounds of ammunition and several hand grenades. This makes him the penultimate fighting Japanese soldier of World War II, before Teruo Nakamura. Onoda killed some thirty Philippine inhabitants of the island and engaged in several shootouts with the police over the years, but the circumstances of the events were taken into consideration, and he received a pardon from President Ferdinand Marcos.


Wikipedia adds that Onoda became disappointed in modern Japan because of a decline in traditional values of respect for elders and duty to family. He also didn't like getting so much attention for doing what he considered his obligation:


Onoda was so popular following his return to Japan that some Japanese urged him to run for the Diet. He also released an autobiography, No Surrender: My Thirty-Year War, shortly after his surrender, which detailed his life as a guerrilla fighter in a war that was long over. However, Onoda was reportedly unhappy being the subject of so much attention and troubled by what he saw as the withering of traditional Japanese virtues. 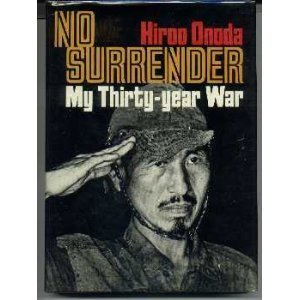 No Surrender: My Thirty-Year War

Hopefully, Japan can still hold on to the values that make this society safe and peaceful to live in for many decades to come.


Taking responsibility and respecting family and elders are things that we can all learn from Onoda.


Here are some quotes from Hiroo Onoda from an interview he gave in 2007 for the Japan Times:


Parents should raise more independent children. When I was living in Brazil in the 1980s, I read that a 19-year-old Japanese man killed his parents after failing the university entrance exam. I was stunned. Why had he killed his parents instead of moving out? I guess he didn't have enough confidence. I thought this was a sign that Japanese were getting too weak. I decided to move back to Japan to establish a nature school to give children more power.
Men should never give up. I never do. I would hate to lose.
Men should never compete with women. If they do, the guys will always lose. That is because women have a lot more endurance. My mother said that, and she was so right.
Never complain. When I did, my mother said that if I didn't like my life, I could just give up and die. She reminded me that when I was inside her, I told her that I wanted to be born, so she delivered me, breastfed me and changed my diapers. She said that I had to be brave.
Parents should remember that they are supposed to die before their children. Nobody will help them later on, so the greatest gift parents can give their children is independence.
Life is not fair and people are not equal. Some people eat better than others. At our nature school, children participate in survival games. For example, they must prepare their own dinner from ingredients they find. Bartering is allowed but still some children will have a feast compared to others.


Articles about Hiroo Onoda: The War is Over... Please Come Out: http://history1900s.about.com/od/worldwarii/a/soldiersurr.htm


Read more on the life of this fascinating man at Wikipedia.
at November 03, 2010

This is inspirational and an example of what made Japan the second largest economy in the world following the Second World War. Unfortunately, she has become corrupted by western influence and values.

Men like Onoda are dismissed by westerners and modern day Japanese as "crazy" and "old fashioned". There are some Japanese who still live and teach their children the old values of Japan but, by far, there are more who do things half-assed and "the easy way".

Japan has been at peace too long, been corrupted by western influence during this period and, as a result, lost her value and self esteem.

Onoda-san is a great man, not just a super soldier. I hope his life and ideals influence modern day Japanese in a positive way. Perhaps, you should create a documentary (in Japanese) that highlights his life...

"Japan has been at peace to long" And this is a bad thing?

To Mark Davis: could not agree with you more. You'd have to be insane, criminally insane, to want war and the suffering, death, and destruction it brings.

As far as the soldier goes, he dedicated himself to blindly serving an evil cause. Being loyal and at the same time inable to distinguish good from evil is nothing that anyone should want to emulate.

This only goes to show that war is insane and that it makes people do insane things.

The man should be applauded for his loyalty and responsibility... Not for the goal he was assigned.

So if it was a German soldier who continued to hide in the woods near the Auschwitz concentration camp, returning periodically to stoke the fires in the ovens for 30 more years because he was loyal to his superior officers and Fuhrer, I don't think anyone would or should applaud.

War is insane and we can see how this man, probably otherwise a fine human being, couldn't overcome its insanity for decades. That's maybe the better lesson to learn from all of this.

One problem - "independent children" aren't seen as "respecting family and elders." Independent children don't simply do as they're expected or told, just because that's the way 'things are' or are 'socially acceptable.' Which, in Japan, might be problematical.

Further, respect shouldn't automatically given due to age. Respect, beyond basic common courtesy is earned, not a right.

As to the debate upthread, one can admire his dedication and perseverance, while questioning his allegiance or sense. And perhaps morality. Soldiering in any sense, taking lives at the behest of government, is - at best - a tricksy field of argument.

But for ultimate soldier, I go with Simo "White Death" Häyhä - over 500 sniper kills in the Winter War against the Soviets.

According to this post, this maniac Hiroo Onoda killed 30 Filipino villagers for no reason whatsoever. Probably took pot shots at them while they picked rice in the paddies. The guy is a freaking maniac and should have been strung up rather than pardoned.

In short, what a ridiculous piece. In the "traditional Japan" whose virtues you extoll, you wouldn't have lasted thirty minutes.

For no reason whatsoever!? Did you actually read the article? he was following orders! What a douche you are!

Onoda has been celebrated as a true hero in Japan. What do you kow about Japan? Nothing, it seems.