Americans Do Barbecue Better Than the Japanese Can! God Bless the United States of America!

About a week ago, my wife told me that we were invited to a birthday party for one of my son's school friends. My wife said that other school parents weren't invited and, since my son's friend (the birthday boy) liked me so much, he insisted to his parents that I be invited...


I had hosted the Halloween party at their class and have hosted several events for the kids. I guess my son's friend thinks I am fun and "funny."


I was pretty happy to be invited as I often do get invited by other parents to help out at these sorts of parties.


The birthday party was yesterday, Saturday, but on Thursday night my wife told me something that made me very unhappy about being invited. She said,


"The people holding the party are an Italian and Japanese couple so they don't really know how to barbecue. So they want you to come along and handle the barbecue duties."


"Yes. Since you are an American, everyone figures that you know best how to barbecue."


Can you believe it? Just because of my passport people think I know how to barbecue!? That's like saying every Spaniard is excellent at the Flamenco and all Germans drive tanks or a Mercedez Benz... Out and out racism, I tell ya!!!!


Suddenly I didn't want to go. I mean, it's hard enough to watch a bunch of kids but a birthday party and having to barbecue for 20 kids and a few parents?! And having to do that to protect the honor of my country!? Talk about putting the pressure on me! Not my idea of a fun time and fun way to spend my Saturday... Especially when I've been working a lot recently and haven't time to do anything and just want to rest. I complained on Friday night to my wife that I didn't want to go.


Too late. She had promised that we'll be there. I made up my mind to have a positive attitude and try to do the best I could to have fun... Defend my country's honor and try to have fun while doing it? Hmmm.... I wonder if those marines were laughing when they planted that US flag on Iwo Jima at the end of World War II? 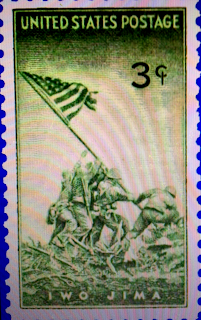 
When we got to the party, I was shocked. No, we weren't the only other parents invited. There were at least 30 other adults there. Probably about 20 kids. I cringed.


Luckily for me, the host of the party, Leonardo (aren't all Italians named Leonardo?) told me to enjoy myself and start drinking wine. I did.


What a feast my friends! Leonardo used to run a very high end Italian restaurant so the food was fantastic! At the barbecue they had tons of really fresh vegetables and the biggest grass fed beef steaks I've ever seen in Japan! Not only that, but they had fresh tiger shrimp, fresh scallops, chicken, tons of sea food, lamb chops from New Zealand...


Oh, and, I guess I should say that they had a hundred bottles of fine Italian wine. I said to Leonardo,


"Leonardo, my friend. Who is going to eat all this food?"


He replied, "Oh, no! My friend! We must have the best party ever. WE must have so much food and a feast that people will never forget!" I'm serious. I couldn't believe it.


One of the Japanese guys who works for Leonardo said to me,


"It's how the Italians always do it!" He laughed. 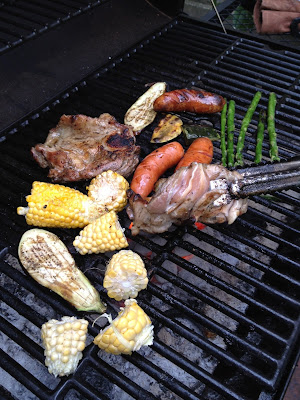 Besides expensive steak, this is what I was barbecuing for 8 year old kids!!!!


They had enough food for 150 people there and it was all very high-class gourmet style cuts and grade. I have never seen such a thing at a house barbecue. No cheap hotdogs and hamburgers!


But I soon realized why the food was like that. Leonardo not only had his son's birthday party, but he also had people visiting from the Vatican! No kidding. There were also several guys who I was introduced to who were like "President of Maserati Japan," "President of Alfa Romeo" something like that (like I said, I was drinking and by the time these guys had shown up with the guy from the Vatican, I was quite tipsy). There was also some Italian movie director there with his model-girlfriend...


Anyhow Leonardo had a few Japanese friends and workers there to handle the barbecue. I was relieved. I kept drinking...


I walked over to the cutting table where the Japanese guys and Leonardo were cutting the steak. Oh, man, those Japanese guys nuked those steaks! They were VERY VERY well-done... Er, overly-done! 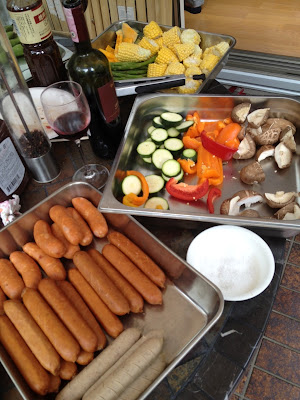 
I looked at Leonardo and, by the concerned look on his face, could read his mind. He was thinking the same thing I was thinking,


"Oh! No! "What a waste of good steak!" Leonardo then looked at me and his eyes met mine. He furrowed his brow. Again I read his mind and said to him,


"Leonardo, gee. I think those are a bit too overcooked. You want them red inside, don't you? Do you want me to handle the barbecue for you?"


So, I was roped into barbecuing the steaks and rest of the food for 60 or 70 people for the rest of the day. I wish I had the time to take the photos of the awesome food but, when you are handling two big grills at once and a few dozen people are waiting for food, you don't have time to do anything...


Well, anything but drink... So I have a hangover today. 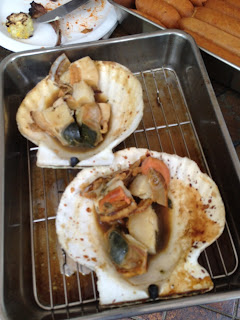 My favorite: Barbecued scallops. The biggest scallops I've ever seen!


Later on, several people complimented me and Leonardo on the food an barbecue. One time Leonardo said "Thank you!" to guests and added, "My American friend here saved the day!"


They all agreed that Americans were the best at barbecuing... At least we're still number one in at least one category!!! God Bless the United States of America!


Ha! Americans to the rescue! (Only at barbecues!?) I laughed.


Anyway. Yes. It was a great party Leonardo! I had heard that the Italians know how to party and eat like Kings. Yesterday I saw it for the first time.....


I also saw why the Japanese say "Americans are good at barbecue!" It's probably not that we are so good at it, it's probably just because everyone else sucks so badly and over cooks everything!
at May 27, 2012

Ha, funny post.
Lifestyles of the rich and famous, eh?

Sure did make me hungry.