Hot on the heels of the very successful Cool and Strange Music post about Yo Yo Hashi, here's today's version that is guaranteed to crack you up! 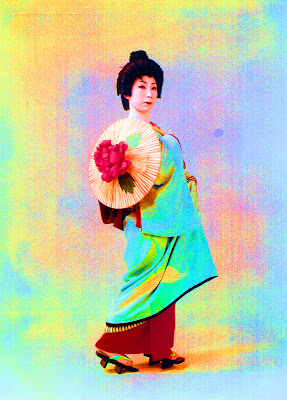 Our feature song today is by a very well known Japanese artists by the name of Akiko Kanazawa. Akiko is probably best known for singing the "Pokemon Counting Song." In this 1982 released version of the Beatles 1966 hit, "Yellow Submarine" Akiko Kanazawa gives it the royal "Japanese" work over for a delightfully different take on a rock standard. Enjoy!


The next song is called "Snake Girl" by Kazuo Umezu. Kazuo Umezu is a Science Fiction/Horror writer and also is well known for drawing manga (comics). You've just got to check out his Wikipedia page. He LOOKS like a nutty manga artist!


Also, once again, if you are interested in geisha, here is the trailer for Matsuchiyo - Life of a Geisha that was recently created by Ken Nishikawa:

I quite liked Snake Girl. He has a great voice.
As for the Yellow Submarine... when I was 3 and in London, England at church with my folks, I suddenly broke into song belting out "We all live in a yellow submarine, yellow submarine, yellow submarine." I apparently had the whole congregation in stitches and had two very embarrassed parents. As my dad carried me out,I continued to carry a tune... and there was applause as I kept right on singing even after the doors closed... I'm told they could still hear me minutes afterward as my poor dad waited for me to either get to the next line or for church to end. Amen, Mike!