Yesterday's guest blog post entitled Heat Back on for Japan - China Relations? Tokyo Could Be About to Get Bigger hit on a very timely subject that I have been thinking about often recently. And that is about how the poor state of the world economy is affecting geo-political relationships. Could this economic malaise be ruining these relationships and leading us into war?


Could it be that under all the bravado, that, actually, these types of incidents like the news story of Tokyo governor Shintaro Ishihara attempting to buy ownership of some islands - whose ownership is contested by Japan, China and Taiwan - have motivations other than just hard core nationalism?... Though the "nationalism card" seems an easier "sell" by the mass media and our "leaders."


The fact of the matter is that these types of disputes are merely symptoms of an economic problem... They are the first shots in a currency war... These currency wars, if cooler heads do not prevail - and they rarely have in history - have lead countries into invasions and real hot wars that involve killing civilians and occupying territory.


These sorts of moves like buying disputed islands are just the most visible of the initial stages of the currency war between Japan and China that, if we're not careful, could get us involved in World War Three.


I just finished reading a quite frightening book by James Rickards entitled Currency Wars: The Making of the Next Global Crisis. In that book author Rickards quite deftly explains, and lays out how, in the past, currency wars lead us into situations that caused tens, hundreds of millions of deaths in World Wars One and Two. I highly recommend reading this book and getting a different understanding on the news and some more insight to how the economy, money, trade and gold are affecting the current global financial system and our societies. 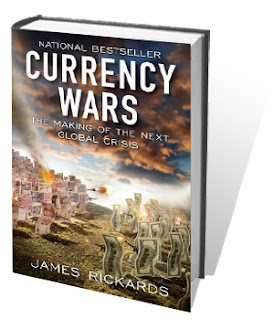 The Amazon book description of Currency Wars: The making of the Next Global Crisis reads:


In 1971, President Nixon imposed national price controls and took the United States off the gold standard, an extreme measure intended to end an ongoing currency war that had destroyed faith in the U.S. dollar. Today we are engaged in a new currency war, and this time the consequences will be far worse than those that confronted Nixon.
Currency wars are one of the most destructive and feared outcomes in international economics. At best, they offer the sorry spectacle of countries' stealing growth from their trading partners. At worst, they degenerate into sequential bouts of inflation, recession, retaliation, and sometimes actual violence. Left unchecked, the next currency war could lead to a crisis worse than the panic of 2008.
Currency wars have happened before-twice in the last century alone-and they always end badly. Time and again, paper currencies have collapsed, assets have been frozen, gold has been confiscated, and capital controls have been imposed. And the next crash is overdue. Recent headlines about the debasement of the dollar, bailouts in Greece and Ireland, and Chinese currency manipulation are all indicators of the growing conflict.
As James Rickards argues in Currency Wars, this is more than just a concern for economists and investors. The United States is facing serious threats to its national security, from clandestine gold purchases by China to the hidden agendas of sovereign wealth funds. Greater than any single threat is the very real danger of the collapse of the dollar itself.
Baffling to many observers is the rank failure of economists to foresee or prevent the economic catastrophes of recent years. Not only have their theories failed to prevent calamity, they are making the currency wars worse. The U. S. Federal Reserve has engaged in the greatest gamble in the history of finance, a sustained effort to stimulate the economy by printing money on a trillion-dollar scale. Its solutions present hidden new dangers while resolving none of the current dilemmas.
While the outcome of the new currency war is not yet certain, some version of the worst-case scenario is almost inevitable if U.S. and world economic leaders fail to learn from the mistakes of their predecessors. Rickards untangles the web of failed paradigms, wishful thinking, and arrogance driving current public policy and points the way toward a more informed and effective course of action.

As I mentioned, when I read the guest post by Imogen Reed, Heat Back on for Japan - China Relations? Guest Post: Tokyo Could Be About to Get Bigger the first thing that hit my mind is that these sorts of actions by governments, like buying islands (that are probably stolen property anyway), aren't always what they seem. There often is, to our chagrin, a profit motivation for all these political games being played by our leaders - that, ultimately, the people have to pay the price for.


Remember that fight in 2010 over the Chinese fishing trawler that rammed the Japanese Coast Guard Boats and caused an international incident and heated exchanges between Japan and China to much global concern? Well, Rickards discusses that particular event in his book and sheds some light on the subject. I thought you might find his comments interesting and though provoking.

Japan Coast Guard ship along with seized Chinese trawler in 2010


In chapter three, "Reflections on a Golden Age," on pages 41 to 42, the book describes how countries use a variety of weaponry to fight other countries in economic war. Japan and China are no different. From currency manipulations, embargoes to tariffs, Japan and China have been involved with this very recently.. If not even today, behind the scenes. Rickards writes:

Protectionism is not limited to the imposition of tariffs but may include more severe trade sanctions, including embargoes. A notable recent case involving China and Japan amounted to a currency war skirmish. China controls almost all of the supply of a certain so-called rare-earths, which are exotic, hard-to-mine metals crucial in the manufacture of electronics, hybrid automobiles and other high-tech and green technology applications. While the rare earths come from China, many of their uses are in Japanese-made electronics and automobiles. In July 2010, China announced a 72-percent reduction in rare earth exports, which had the effect of slowing manufacturing in Japan and other countries that depend on Chinese rare earth supplies.
On September 7, 2010, a Chinese trawler collided with a Japanese patrol ship in a remote island group in the East China Sea claimed by both Japan and China. The trawler captain was taken into custody by the Japanese patrol while China protested furiously, demanding the captain's release and a full apology from Japan. When the release and apology were not immediately forthcoming, China went beyond the July reduction in exports and halted all rare earth shipments to Japan, crippling Japanese manufacturers. On September 14, 2010, Japan counterattacked by engineering a sudden devaluation of the Japanese yen in international currency markets. The yen fell about 3 percent in three days against the Chinese yuan. Persistence by Japan in that course of devaluation could have hurt Chinese exports to Japan relative to exports from lower-cost producers such as Indonesia and Vietnam.
China had attacked Japan with an embargo and Japan fought back with a currency devaluation while both sides postured over a remote group of uninhabited rocks and the fate of the imprisoned trawler captain. Over the next few weeks the situation stabilized, the captain was released, Japan issued a pro forma apology, the yen began to strengthen again and the flow of rare earths resumed. A much worse outcome had been avoided, but lessons had been learned and knives sharpened for the next battle.

I think if one stops to think about this deeply they can see that the news reported isn't always what it seems to be. In this case, the argument over these islands being Japanese or Chinese as merely being an argument over pride, history and nationalism then, that argument is certainly missing the big picture; or, at least, a huge part of it... Could it really be that these incidents and ownership of those islands is actually just another bargaining chip in the economic war that is currently being waged around the world?...


It's the war to devalue currencies down to zero... And no one wants to be last. Have you ever played the card game called, "Old Maid"? The one holding the old maid last loses.... Who will be left holding the "Old Maid of debt" last? Certainly neither Japan nor China want to be that card player.


Many people dismiss Tokyo governor Shintaro Ishikawa as merely being a right-winged nationalist nutcase (I used to think that too)... But you don't become the mayor of the biggest city in the world; a city whose total metropolitan area accounts for 51% of Japan's total GDP by being merely a hot head nationalist...


I think there a method to the madness of Ishikawa - as well as possibly a currency calculator in his pocket.


The consequences of a miscalculation in a currency war, as we have seen in the past, can lead nations to total war and a lot of people getting hurt... Let's hope that both sides don't miscalculate... They just can't be that crazy...


Or, at least, let's hope that they are not that crazy for our own sake!

When it comes to one's own country, there is usually a lot of pride... and if there isn't, others say get the eff out.
Nationalism vs pride vs economy. I suppose it all depends on the personal perspective of the one discussing it.
If Russia says that some of the northern Canadian isles are theirs, Canadians will get off their ass once the hockey play-offs are over and kick Ruskie butt!
It's good to be proud of one's country, while noting that there is always room for a lot of improvement. Always. There is no such thing as utopia.
As for Japan and China and its pissing match over a bunch of islands - well... as long as someone wants to look after the people on them, that should be a primary concern. Ancient rights to property change with the tides of history. Hey, wasn't Palestine there a minute ago? Israel? Again?
U.S.S.R. to smaller States. Whatever.
The average Japanese person doesn't really care about the hunk of rocks at all, but only does because it believes that taking away the land would be like taking away a part of them. It's like Japan's right to kill whales... whenever the topic brooched, all of sudden people start eating whale sashimi - they rest of the time, you'll never see it on a menu. It's only important to people because others have told them it's important.
Want to avoid a nuclear war? Let's start taking about... oh, how about the shortage of wild salmon?! Yes... see... islands? Power shortages are now passe.
Don't worry. Both China and Japan are far too sensible to come to blows in a war, let alone a nuclear war. I hope.