My Socks.... (And Leaving a Mark). Are you leaving a mark on the world that you were here?

I have the exact same pair in the drawer somewhere! 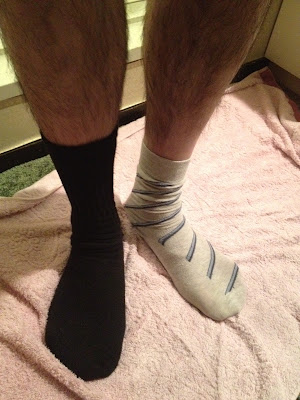 What's the point of this? Nothing.... Well, nothing excepting one thing; and that's about blogging.


Even when I die, this post will still be here, fifty years from now.

Email ThisBlogThis!Share to TwitterShare to FacebookShare to Pinterest
Labels: leave a mark, leaving a mark, my, my socks, pair of socks, socks, socks my

Blogging rules! Sock it to me baby, as Mitch Ryder howled!

I'm not leaving much of a mark. Er, as much as I could.

While reading your BBQ post I was thinking: you leave a huge mark, i.e. the things you do for your child's classmates, this blog, articles you've written, and being the one who saved a BBQ. Impressive stuff and an elevated example to best.

I tried enlightening a couple of younger guys about economics and liberty at a bar last night, heh, they actually ran from me. Couple of others listened though.

A weird quirk for this blog and Firefox 5.0:

For awhile I thought you were messing around and getting rid of comments.
That was a bit of a downer. Heh, thought maybe you'd had enough of my imperfect comments or something?
Turns out I have to open a blog entry in a new tab to see the comments, otherwise it's like there are no comments or a place to post them.

Hm, it's not doing that now.
It's not a constant thing.
I wonder if it was because you were uploading to the page?

Anyway, it happened a couple of times.
Maybe I shouldn't have said anything?