Japan is a "Bug looking for a windshield?" I think we just found it.

I've been writing for months that Japan's situation is past desperate (well, me and many others who follow the markets)... I've written several times over the last year that we are heading for the cliff. I've actually stuck my foot in my mouth (gambling man and all, you know?) and called for another major crisis to hit Japan this summer because I believe that Europe will be the trigger for the next massive crisis and I believe it is coming this summer. Please refer to: Here's Comes Europe's and Japan's Debt Crisis - Just in Time for Summer:

This debt crisis has terrible repercussions for the world economy and Japan. Reuters has a good article on it entitled: Europe Poses Global Recession Threat: IMF. The article is a good rundown of the debt problem but the solutions they offer of throwing money at the problem are completely wrong (Been there, done that. Didn't work)... For proof of that, just look at how well throwing good money after bad has done for Greece.
Looks bad. These things have a way of getting out of control. But Japan is OK, right? Because these European countries can't print their way out. Japan can. Let's look at a few charts there. Here's a chart that shows the world ratio of debt to GDP: 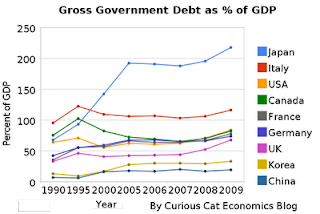 Here's one to show Japan's debt mountain in yen: 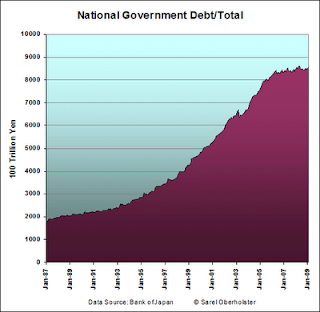 As an important note, as of 2009, the Japanese national public debt, according to my handy-dandy calculations equaled over ¥6 million yen per man, woman and child in the country (about $72,000 USD). That means that if every single one of us coughed up ¥6 million yen and paid off our total debt today, we'd still be back in massive debt tomorrow as the costs of running the Japanese government, social security and health care, etc., etc. are completely out of control.

...
But wait! Things are getting better, right? Wrong! Here's an article you might want to read from a the New York Times that asks the laughable question: "Could Japan's Debt Lead to a Crisis?" (Let me ask you: "Could the next Pope be Catholic?") But, like I said, that article is a year old. I add it because it is a typical example of the confused reporting emanating out of the MSM... "Everything will be alright as long as government's keep printing money! We have to save the system!"
Well, no. We don't have to save the system. We can't save the system. The system is a wreck.
.......
I think, as I've said many times before.... The summer of 2012 is going to be a very hot one for Japan - as well as all around the world.


Well folks, it looks, unfortunately, like these predictions might come true. The chances of the fan getting blasted by the crap and the reverberations slamming the Japanese economy just jumped up a hundred-fold.


Socialists won the presidency in France... I predict that will seriously damage the power of the bailout and pro-austerity crowd in the EU and I believe this is the beginning of the end for the Euro. And, as Mish Shedlock has successfully predicted when he said that someday, a right-wing nationalist is going to go before the electorate in his European country with a copy of the EU charter and while tearing it up, he tell people to, "Vote for me and I will exit the EU!"

Now it has happened! Neo-nazi groups won enough power in Greece to be recognized in parliament and now the rumbling is for an exit of the Euro and no deal to any bailout of the bankers.


These events are going to affect Europe and the USA and Japan in so many ways..The unforeseen consequences of so many years of massive debt and money printing are coming to a head.


What cannot go on... Stops. Japan is going the have to hottest summer in decades this year and, no, I don't mean Global Warming either.

I read an interview with Mish and was reminded of your predictions.

Mish Shedlock on the Rise of Money Metals, the Fall of the West ... and Why Credit Matters
Sunday, May 06, 2012

A lot of what he says makes sense. Other stuff, not-so-much. Such as:

[I don't think he includes gold as he thinks gold is money. I'm reminded of the article, Gold Isn't Money, Yet

lot's of People disagree though.]

"The US will actually fare relatively well in a collapse of China."

"The US dollar will strengthen much to the dismay of the hyperinflationists. Then, after Europe, China, and Japan take big hits, then and only then will the final plunge in the US dollar occur."

Whatever happens, I wish it would just get over and done with.

"Gold may not perform very well in the near future. The gold market has performed so well, we could have some setback." - Marc Faber in CBS Market Watch