Cool and Strange Japanese Music: Yo Yo Hashi - "YoYo's Pad"

It don't get cooler than this. Another version of Cool and Strange Japanese music. 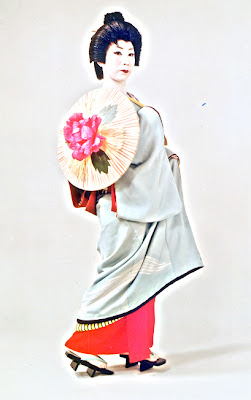 
This stuff is so obscure folks that I can't tell you anything about it except that it is awesomely cool and it was made a long time ago and the girl singing in it is sexy as hell!


いっしょに銀座をあるかない？
Issho ni Ginza wo arukanai?
(Won't you walk with me to the Ginza?)


Well, that's it... But not completely... Just like this awesome sexy Japanese goddess that gives you blue balls, Yo Yo also has you hanging with this next number of which I have zero on information too!


Do you also want to see the trailer of our geisha film: "Matsuchiyo - Life of a Geisha"?

The first one seemed, Retro.
I liked the tune.
And I even understood the last word,... totally.

The second one was a big jump to mello.
Not bad.

The third one was even a bigger jump to mello, a bit too much for me. As if super restrained, when the tune seemed like it should be explosive.
Maybe that's the Japanese way,... in many things?
Subtle restrained intense minute explosiveness?

The final one, your trailer, oh wow, I always thought it was pronounced, Gee-sha.
Gay-sha is going to take some getting used to.
Or maybe it was just the announcer's accent?

The world needs more Geisha.
Many - many - women have told me, without knowing this is what they mean: they want and Need a geisha.
A lot of men too, of course.

I think a lot of People in the world think they know what a geisha is, but after viewing this short bit, maybe they don't really know, they just think they do?

"A woman beyond a girlfriend" - I like that, the meaning of it.

There sure are a lot of lonely women in the world who would be made whole if they could fill this roll, if you ask me.
I feel sorry for those lonely women, by themselves, spinsters if you will, many of them. They have no one, but they could. The State says, "No! There is only the state, nothing outside the state!"
Lotsa bad People in the world,... who like it like that and work to keep it that way.
... So sad.

One of the worst things I ever did was point to where the homeless shelter was for the woman who was knocking on my door, looking and asking. She had a broom stick across her shoulders with all her belongings wrapped in cloth hanging from both ends, all that she had after she escaped hurricane Katrina.
You could tell she'd been walking a lot, and it wasn't a fun walk.

She said she was looking for the shelter, but that wasn't what she was seeking.
I was angry at the time so I didn't pick up on anything.
In hindsight, I feel like I did the wrong thing, my anger had totally blinded me.
I'll never forget sending her in that direction.
I think it was probably a bad experience for her, and she seemed like a nice Person.

Doing anything more seemed so socially unacceptable at the time. Our town was flooded with Katrina refugees and it seemed like there was no socially acceptable way to help them other than through official goberment channels that led to nowhere and did little.
They were housed in the poor section of town, hidden away from most People.
This was all - all of it - government social conditioning resulting in a worse state for the individuals.

Dang, I feel weak for not breaking free of that social conditioning.

Sorry for going long, I'm on a streak for some reason.